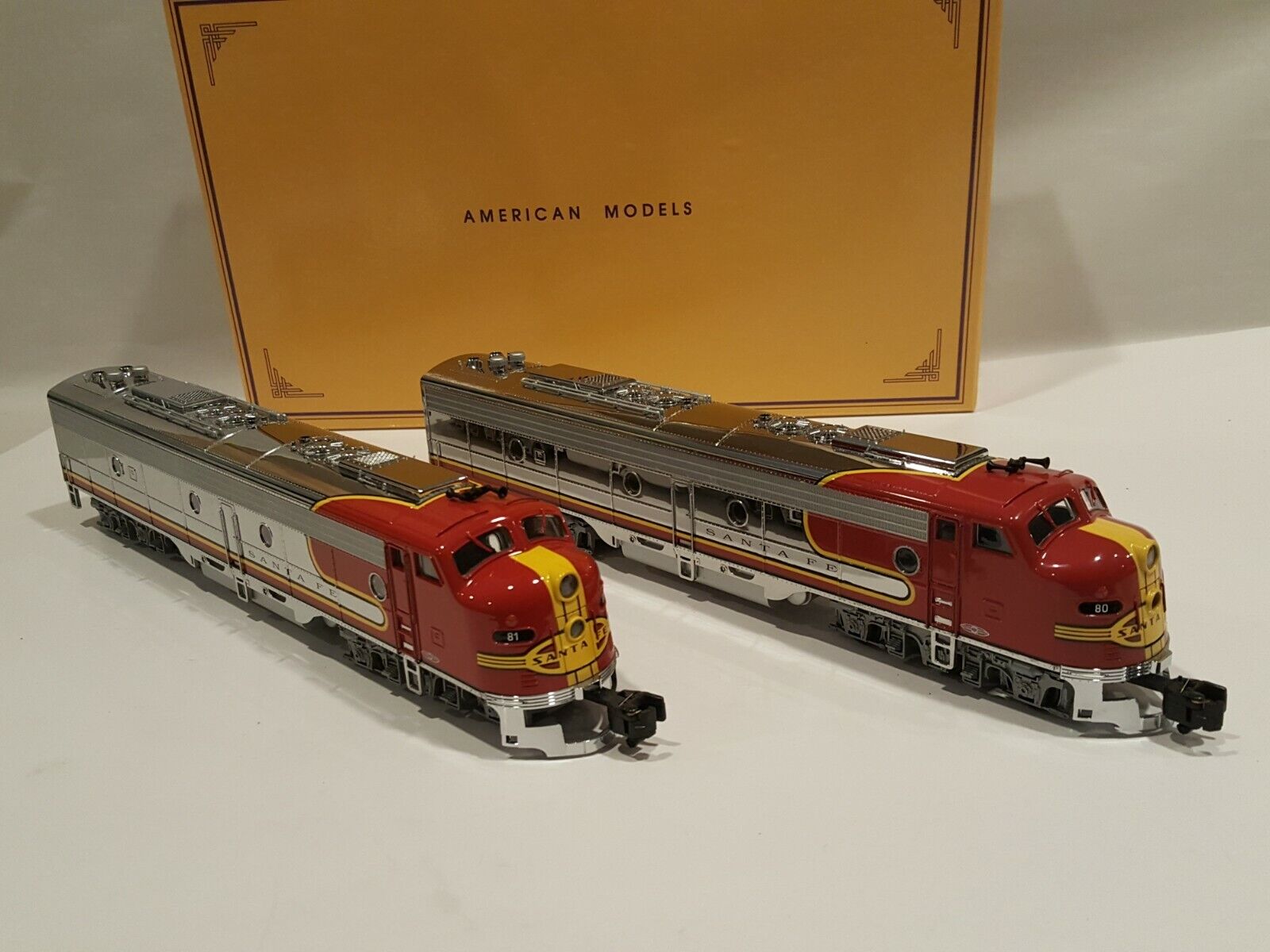 Both units are powered.  The wiring for the trailing unit will be reversed so the units can be run back-to-back.  If it has sound, the Ott sound system (mediocre at best) will only be in the "lead" unit.

Question: wouldn't a better time to ask those questions be before you bought them? Just curious...🤔

I love the E8's. I have an NYC and an IC. Someday I'll probably add a UP and an MKT. Congrats.

I agree.  The AM E8's are really nice locos. I managed to snag a pair of UP's from AM 4 years ago.  Unfortunately I haven't been able to get around to filling the pilots yet as about that time I had to put modeling on the back burner. All very handsome engines, to be sure...

To get off track for a second; I need a few small details for my Enhorning F unit, and maybe some for these E units might fit the bill. Are things like horns, etc available?

There are no parts for E8’s listed on the AM website but if you call Ron and tell him what you need it is possible that he has some. Slobber... drool... I can just mentally "see" one of those in a Frisco Racehorse scheme and sitting on our fireplace mantle. Any Racehorse scheme variant would be fine! (As built scheme pictured.) That is a classy looking engine.

That is a classy looking engine.

I agree! What really made the scheme unique was that each engine was given either a famous racehorse name like "Cavalcade", "Whirlaway" (Kentucky Derby, Triple Crown winners/etc), or a horse of significance in history such as "Ranger" (horse of Revolutionary war hero Henry "Light Horse Harry" Lee), "Commanche" (the only member of the U.S. Calvary to survive the Battle of Little Big Horn), etc.

My favorite of the series was #2020 "Big Red". The history of that name was that the Frisco originally wanted to use the name of the famous race horse "Man o' War" but was prevented from doing so by copyright, so they used "Man o' War's" nickname that wasn't copyrighted: "Big Red". IF there was such a thing as the perfect name for 70', 315,000 lbs of 85 MPH steel painted fire-engine red , "Big Red" was surely it!

The scheme went through three phases before being replaced.

Meteor: The above engine pic represents the original paint scheme consisting of Fire Engine Red with gold cat whiskers, stripes, and lettering. This one is referred to by Friscophiles as the "Meteor" scheme.

Full Meteor: Very shortly after delivery, it was decided to add a white outline to all striping and lettering to make it stand out better. Here's an example of that scheme: Meteorite: In the late 1950s, some of the units began to receive a more cost effective paint scheme that did away with the white outline, and used yellow paint for the whiskers/striping/name/etc. This one was referred to by enthusiasts as the "Meteorite" scheme as exemplified by this modified E7: In 1964, the Frisco began to implement an "austerity" scheme on their freight engines to save repaint costs. The carbody F's began to lose their stripes, and instead a single "Cigar Band" was applied to the nose. This quickly bled over to the E unit fleet, and a few of the E's were painted in such a scheme. When painted into the "Cigar Band" or "Austerity" scheme, the engine lost its horse name. Here's an example of that scheme on an E7m: In early 1965, the Frisco decided to standardize the paint scheme to what was intended to be a more visible (for crossings) Mandarin Orange & White scheme. The O&W scheme was worn by a few of the remaining E's. If you can stand to look at it, here's an example of that scheme: The lurid O&W scheme is almost an insult to what the E unit fleet proudly wore throughout the 1950s and into the 1960s.

So, there you have it. That's the way the Frisco painted their E's from about 1950 or so onward.

I remember having the D&H and Santa Fe Alco PA's back in the early 1990's I think it was with the beautiful chromed finish like these beauties. As pretty as it was, there was too much chrome. Would it be a sacrilege to paint the roofs  silver to appear more prototypical?  I love the way the two finishes compliment each other like the stainless Santa Fe F7's look. Are the trucks painted black?

And please yank those awful couplers off ASAP!

I remember having the D&H and Santa Fe Alco PA's back in the early 1990's I think it was with the beautiful chromed finish like these beauties. As pretty as it was, there was too much chrome. Would it be a sacrilege to paint the roofs  silver to appear more prototypical?  I love the way the two finishes compliment each other like the stainless Santa Fe F7's look. Are the trucks painted black?

And please yank those awful couplers off ASAP!

To each his chrome...

I have two sets of Budd cars (ACL and NH) that have been chromed and it is a bit much and hard to photograph.  At the time I bought them AM wasn't listing painted HiRail Budds.

I passed on the Santa Fe PA's because of the chrome, but now I sorta regret it.  I keep hoping AM will rerun them with silver paint.

I'd like to experiment with toning down AM's chrome, but these things are just too expensive for experimentation and there's no guarantee the flatter finishes would adhere well to the chrome.

I have the AM PRR Budd cars in both chrome and silver. I like them both, I give the silver a very slight edge in preference.

........very happy with them.   One slight problem though......they are DC..........I was afraid they would be.......Being a TMCC and Legacy operator I must convert them to AC.  Question is how......AC operation or upgrade to TMCC.........need some good advise about this. I could call American Models and ask if they would convert to AC but how do I get both Loco;s to operate together?   TMCC each Loco and then lash them like Lionel does?    What do you think?

TMCC's been controlling DC motors for years.  All my Lionel/Flyer TMCC locomotives have DC motors in them.  A TMCC conversion is all you'll need.

All AM has is Forward-Neutral-Reverse electronic reverse units that automatically start up in forward.  In the "trailing" locomotive, the wiring to the motor is reversed so they will run back-to-back.

They will cycle with a short power interruption like Flyer.  Unlike flyer, after a few seconds of being powered off, they will again default to forward.  They tend to remain in sync pretty well.

I am more interested In TMCC conversion ........Which board would be best?  I wish I could find two cruise Lite boards but it looks like cruise commander with Nudge control (lash up) is going to be my best way........

I am more interested In TMCC conversion ........Which board would be best?  I wish I could find two cruise Lite boards but it looks like cruise commader with Nudge control (lash up) is going to be my best way........

Someone else is going to have to answer that.  I have no experience with TMCC upgrades, just know they are possible.

I am more interested In TMCC conversion ........Which board would be best?  I wish I could find two cruise Lite boards but it looks like cruise commander with Nudge control (lash up) is going to be my best way........

I am at the present doing an install of TMCC into a set of F7s, if you want TMCC with cruise you will need a B-unit or a dummy A-unit. If you are wanting individual boards for each unit you can use the Mini-2 board but you sacrifice the cruise. There is not enough available space inside the AM diesels for the cruise board, it will be a tight fit for the Mini-2 but it can be done.

In the S scale topic further down  is a question if Flyerchief, Legacy, and conventional can all play together, l posted a picture of an American Models GP 30 with a Mini-2 board installed, the E would be a similar installation, not sure if you want sound, that may require some machining. If so contact Ed Goldin.

I don't own an E8 locomotive, are they longer than the F7s?

If so it may be possible to move the motor forward or aft to allow more space for the motor driver board.

I don't own an E8 locomotive, are they longer than the F7s?

There will be a test on this next week... I learn something new every day 😄 Ed converted all of my AM E8's to TMCC with Railsounds. There is room inside the shell for the cruise light boards, speakers sound etc.  The FA's were another matter. We used a wired tether and put the electronics in the unpowered PB unit. Ed use a Cruise Commander since there was more space.

I have the American Models UP FP-7 - one feature of that loco is that both trucks are driven by a single, centrally mounted DC can motor.  so there is space in the shell, but you have to work around the twin drive shafts coming from each end of the motor.  I also have the AM UP SD-60 with a similar set up (and a lot less space within the narrower hood).  In that case, the electronics board is mounted directly on top of the motor, via double-sided foam 'tape'.

As I recall, only the PA's and GG1's have two motors.

After long delibration I have decided not to attempt a conversion on my F8's.  This means that I will put them up for sale.   Anyone interested I'll make them a fair price.......

After long delibration I have decided not to attempt a conversion on my F8's.  This means that I will put them up for sale.   Anyone interested I'll make them a fair price.......

Your email is not in your profile, Mine is email photos and price

Beautiful locomotives William, if I had room for a couple more it would be those you are disposing of.

Need a rather involved track plan drawn out.
10 minutes ago

What did you do on your layout today?
44 minutes ago

Loud vs. Quiet Trains
48 minutes ago

Best cleaner that's safe for paint on lionel plastic body diesel
2 hours ago
Best blue comet set?
2 hours ago
Layout using 45 degree crossovers
2 hours ago
What is this?
2 hours ago

Hanging out with JDstucks, RBP Trains and the Detroit 3 Railers
3 hours ago

Train of Steel
6 hours ago