Does anyone know if any manufacturers make automobile bridges?  A search of Google turned up only railroad bridges and the occasional concrete overpass, which is not really what I want.  Looking for something that would be applicable for where a 2-lane road crosses a river or a creek.

A double track railroad bridge can substitute for an automobile bridge. One hundred years ago, the bridges were built the same way, with Pratt or other types of trusses.

We drove across the Crow river in Minnesota most weekends in the fifties on a one lane truss bridge just outside of Rockford.

Crow river products.com has an overpass and a stone bridge. Either one should meet your needs.

I've recently modified a Plasticville Truss Bridge to be a single-lane rural bridge to cross a railroad track through a narrow cut.  If you needed a double-lane version, I'm sure you could do this in side-by-side fashion.  Instead of a wood floor, you could do a solid surface...although that's pretty light trusswork for a solid floor thruway...and load. I've recently modified a Plasticville Truss Bridge to be a single-lane rural bridge to cross a railroad track through a narrow cut.  If you needed a double-lane version, I'm sure you could do this in side-by-side fashion.  Instead of a wood floor, you could do a solid surface...although that's pretty light trusswork for a solid floor thruway...and load.

That looks just like the one we drove over most weekends.

A bit off but still might be of interest, the "Kentucky & Indiana Terminal Bridge" has auto lanes on either side of the tracks.   I plan to do a small version since I have memories of crossing this as a kid.  We lived in Southern Indiana and one set of grandparents, uncles, lived in West Louisville so my father would sometimes take this route.  My mother hated it with the narrow lanes, open grid deck, and skimpy guard rails.   Once we had a flat and my father used one of the emergency turnouts to do the change, while doing a train came across and it was a wild shaky time hanging high about the Ohio river.  Never again did my mother cross that bridge.

As a side note some years ago the NS shut down the bridge to all vehicle traffic for safety reasons.

My version of the bridge will be single track using a couple of MTH arch bridges separated by an Atlas bridge.  Then after creating an acceptable open grid road deck I'll have to detail a red and white 55 Chevy with passengers and a flat tire,...

I just  used the sides of the small MTH bridge for my car bridge. I was going to suggest the Plasticville bridge.  It is very reminiscent of the rural truss bridges over the New River in western Virginia.  Muliple spans were used to cross the N&W reacks and the river.

Crow river products.com has an overpass and a stone bridge. Either one should meet your needs.

I would also recommend Crow River.  Very nice products with a lot of flexibility. I am using a bunch of these to depict a prototype highway overpass on the Panhandle.

I remember one trip west across that K&lT bridge out of Louisville.  MR magazine once offered an article and plans in HO for the station at the Indiana end of the bridge.  Other bridges replaced it, and l wondered what happened to it. It must be the bridge my dad fired engines across, and complained about smoky tunnels in southern Indiana.

The old Marx through truss / girder bridges can function well as a road bridge. They are cheap, and can be  painted / detailed to meet your needs. I have two that are set side by side that will serve as a 4 lane bridge crossing of a water feature I am working on.

You could use a Lionel girder bridge ... MTH and Marx made these as well.    I don't have a photo of one but this bridge is  basically a flat surface with a girder on each side.  Depending how wide a space you want to bridge these bridges ( as all bridges ) can be used in multiples.   Many were/are made since the PW era.  You could paint over any printing on the side of the girders.  I see these kinds of bridges being sold new and used at train shows.   I believe the girder bridge are/were also manufactured for double track?

As stated above any of the railroad truss bridges could be used for auto traffic. You stated you didn't want an overpass are you looking for truss, girder, plate girder?  You wouldn't be looking for a suspension or cantilever/truss combo to cross a creek or stream.

Andre Garcia (Forum Handle: AG) has/had a company, River Leaf Models (https://riverleafmodels.us) and offered a highway overpass. From the pictures I've seen on his site and layouts, it's a nice build, but you might have to raise the footings for additional clearance as it's designed similar to the early concrete bridges that were common in Los Angeles that pre-dated double stacks. 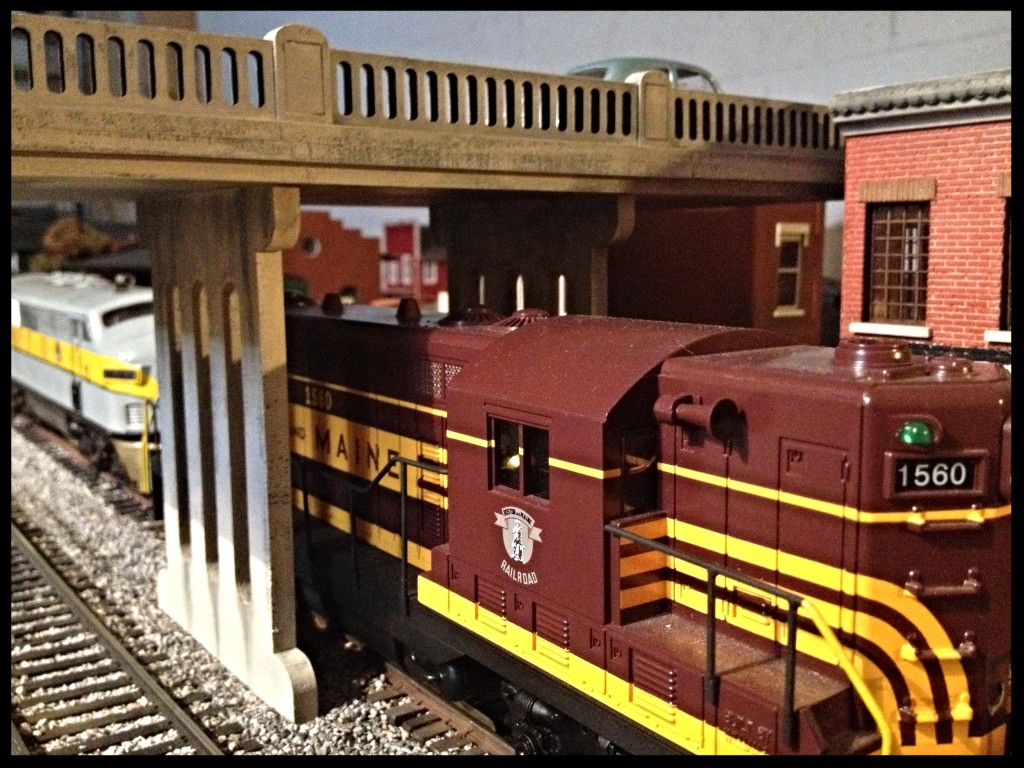 Crow River Products also has a similar one.

To make an automobile bridge, I took a Lionel operating drawbridge, which has a built in track on the bridge for running a train on it, and I put a piece of cardboard over that track and glued on Woodland Scenics fine gray ballast to make a road.

You can see the road on the risen drawbridge on the left side of the photo below: Then after creating an acceptable open grid road deck I'll have to detail a red and white 55 Chevy with passengers and a flat tire,...

Mike, I don't know if this will work for you but the closest thing I could find for grated road bed was dry wall sanding screen.  I've added crossing gates since these photo's were taken.  Love the idea of the '55 Chevy.

MTH Announces Premier F7's - Plus our custom runs
40 minutes ago

A question to Athearn
44 minutes ago
Buy anything cool lately?
48 minutes ago
CHRISTMAS TRAINS - LETS SEE THEM!
53 minutes ago

How to keep G scale track connected?
55 minutes ago
Paint Removal
1 hour ago
Cutting Down Lionel 022 Switches
1 hour ago

INQUIRY: Insurance for a train collection -- worth it?
1 hour ago