LionelskiOGR Forum Member SUPPORTING MEMBER
Hi guys,
My latest blog post is an update on my Fandor set and what I've learned about that company.
Check it out here:
https://www.warrenvillerailroa...something-new-for-me
Oh yeah, thanks for the info you guys provided in October on this subject!!
5/14/224:12 PM
❤️ 2
Original Post

Two things stood out to me the most in the pictures. First ,on picture 2 , what era of blue thread do you believe it to be that's stuck to the track? Pre or post war? Maybe mpc?

Second thing that stood out to me and was a great learning experience is your mug that states: "you ❤️ to fart". Very educational and much appreciated.

In all seriousness, what a unique and neat train set. Love to see it in action! I've been thinking about hitting up some estate sales and garage sales to find some hidden gems. Mainly a 226e Lionel in prestine shape. As always thank you for your blog and sharing!

The thread is original Fandor

I did power it up (using a Lionel pre-war Z transformer) and move it did. - I'm a happy puppy.

Good luck with your 226e search.

AND, thank you for your kind words on my blog!!

John, I'm going to do a little bit of research on the fandor and dorfan prewar. They just look like classic well built trains. May be reaching out to you for info!

What a great find John. It has obviously been well cared for over the years.

You're in for a real treat Donnie.  Fandor turned out an impressive array of European and American style trains...for example As an aside, they paid attention to their American competition - note the similarities between the Fandor car above and this Ives Car. Generic Trains - no cowcatcher but with bumpers - European, add a cowcatcher - American ...and cars and trains with a distinct European flavor/build ...and let's not forget the accessories You're in for a real treat Donnie.  Fandor turned out an impressive array of European and American style trains...for example

As an aside, they paid attention to their American competition - note the similarities between the Fandor car above and this Ives Car.

Generic Trains - no cowcatcher but with bumpers - European, add a cowcatcher - American

...and cars and trains with a distinct European flavor/build

...and let's not forget the accessories

Thanks for the pics Bob

Yes Bob, thanks especially  for the photo of the Fandor station.
Recently you gave ID to my station. I had No idea that there was a canopy for the passenger cars! Remarkable.

Wow. I have a few Lionel prewar and postwar on my list to get through. I'm hoping by winter I can start doing some research and purchase. I'll keep you guys posted! Thank you.

A friend pointed out that TCA's Western Division's site has a real nice 1 page article on Fandor.

A link to it is now at the very end of my blog on this subject: A Fandor Pre-War tin Train Set - Something New for me! (warrenvillerailroad.com)

MUCH thanks TCA Western Division!

Some worse for wear Fandor from Downunder 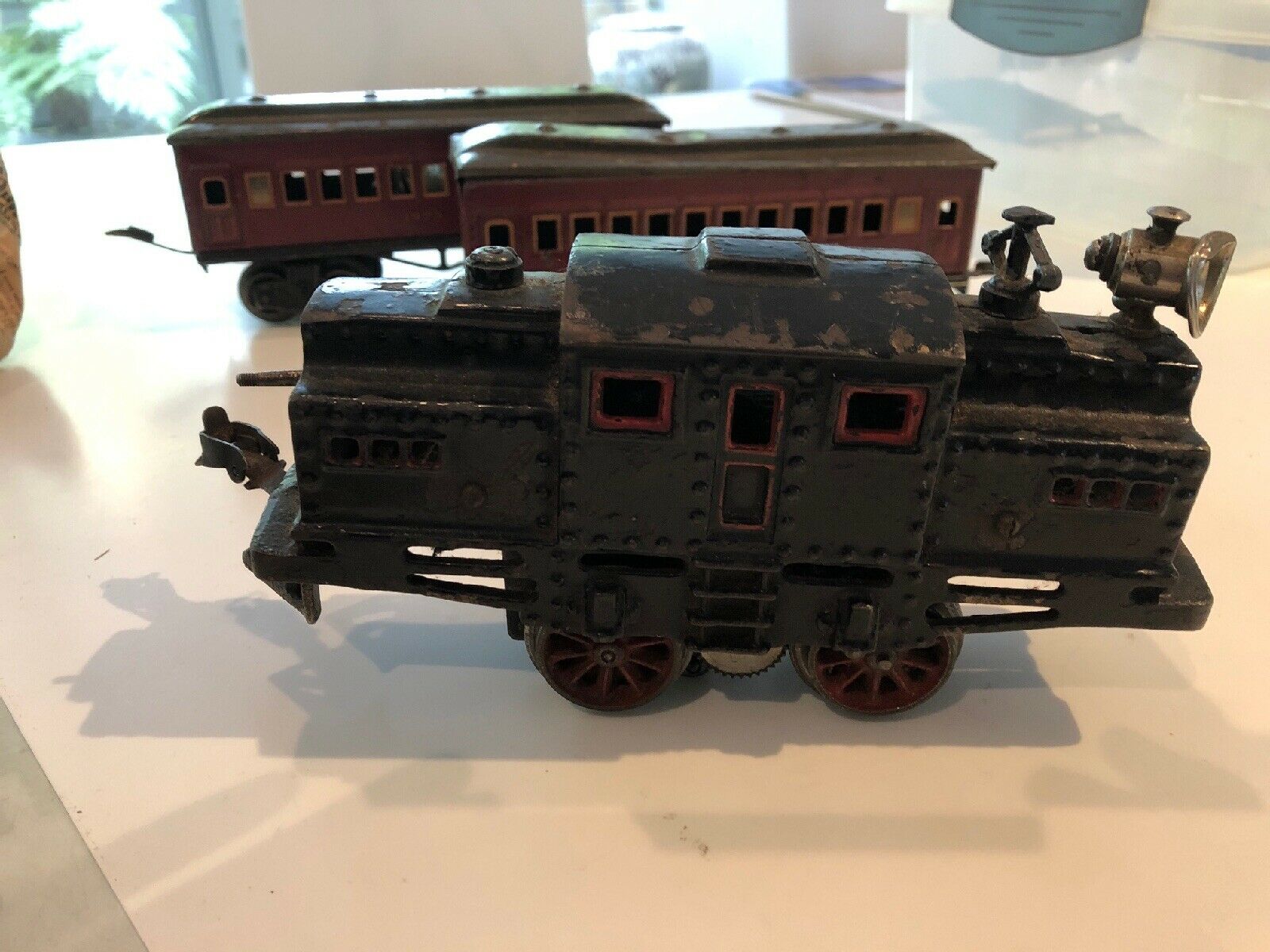 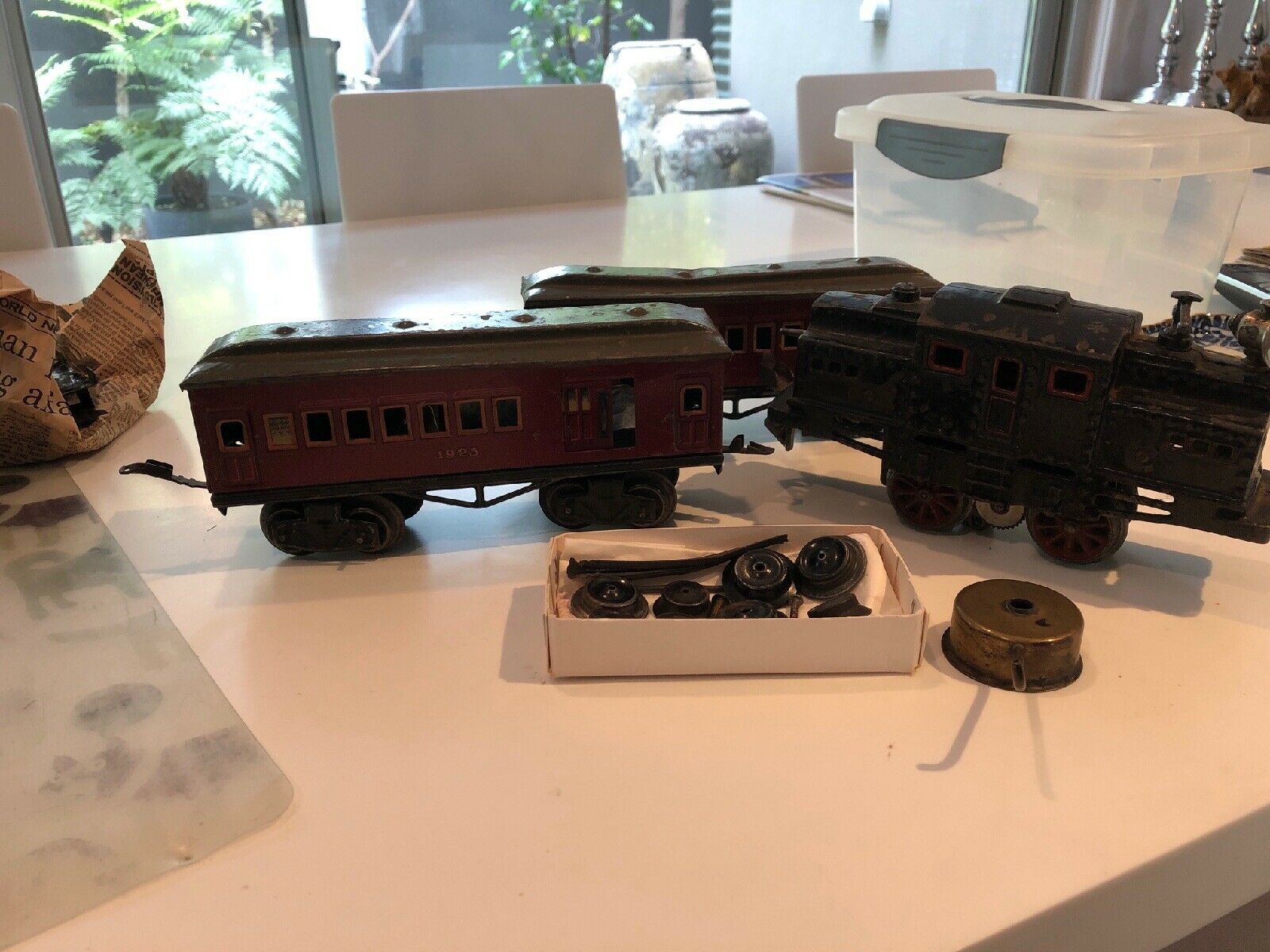 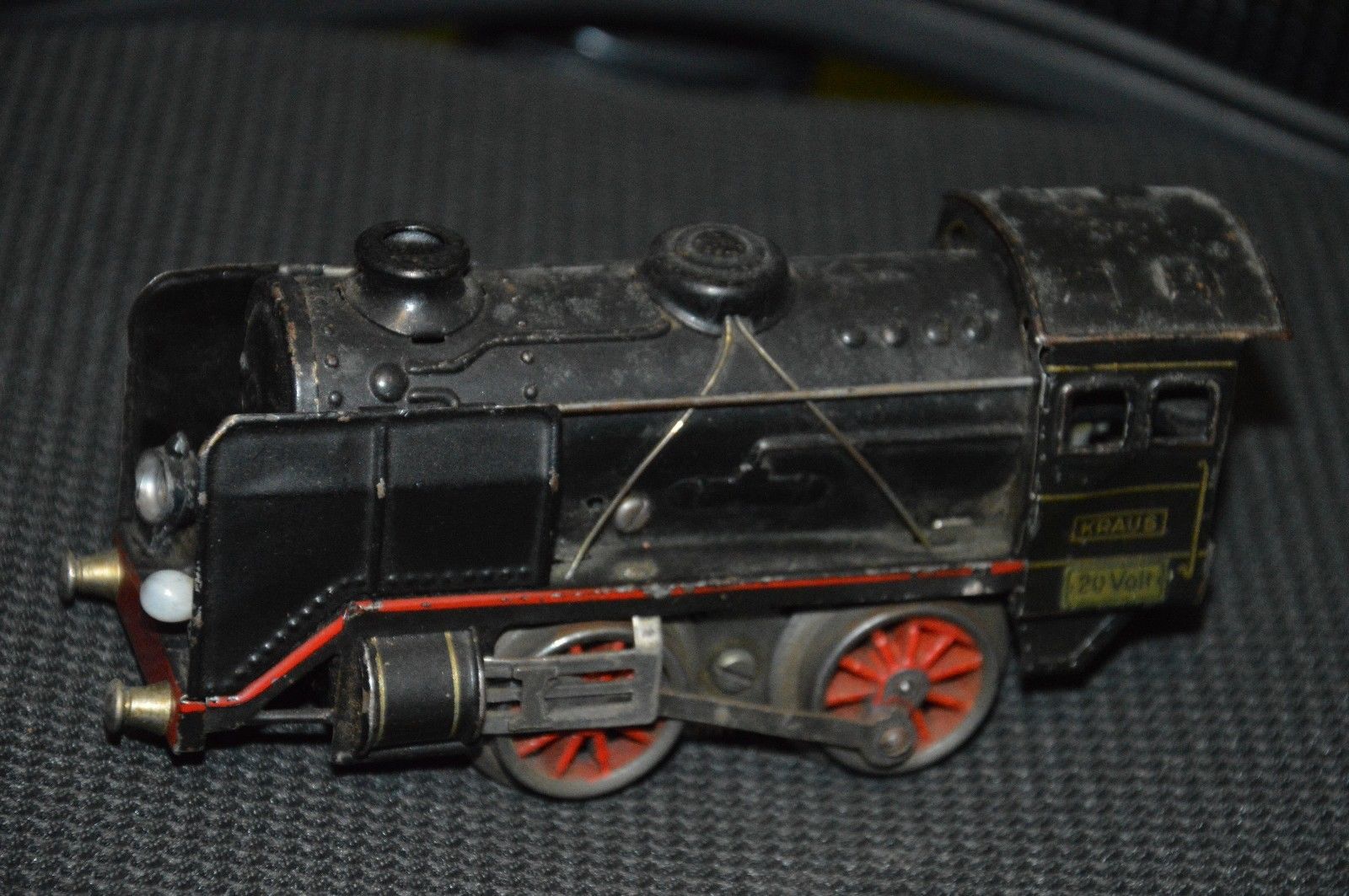 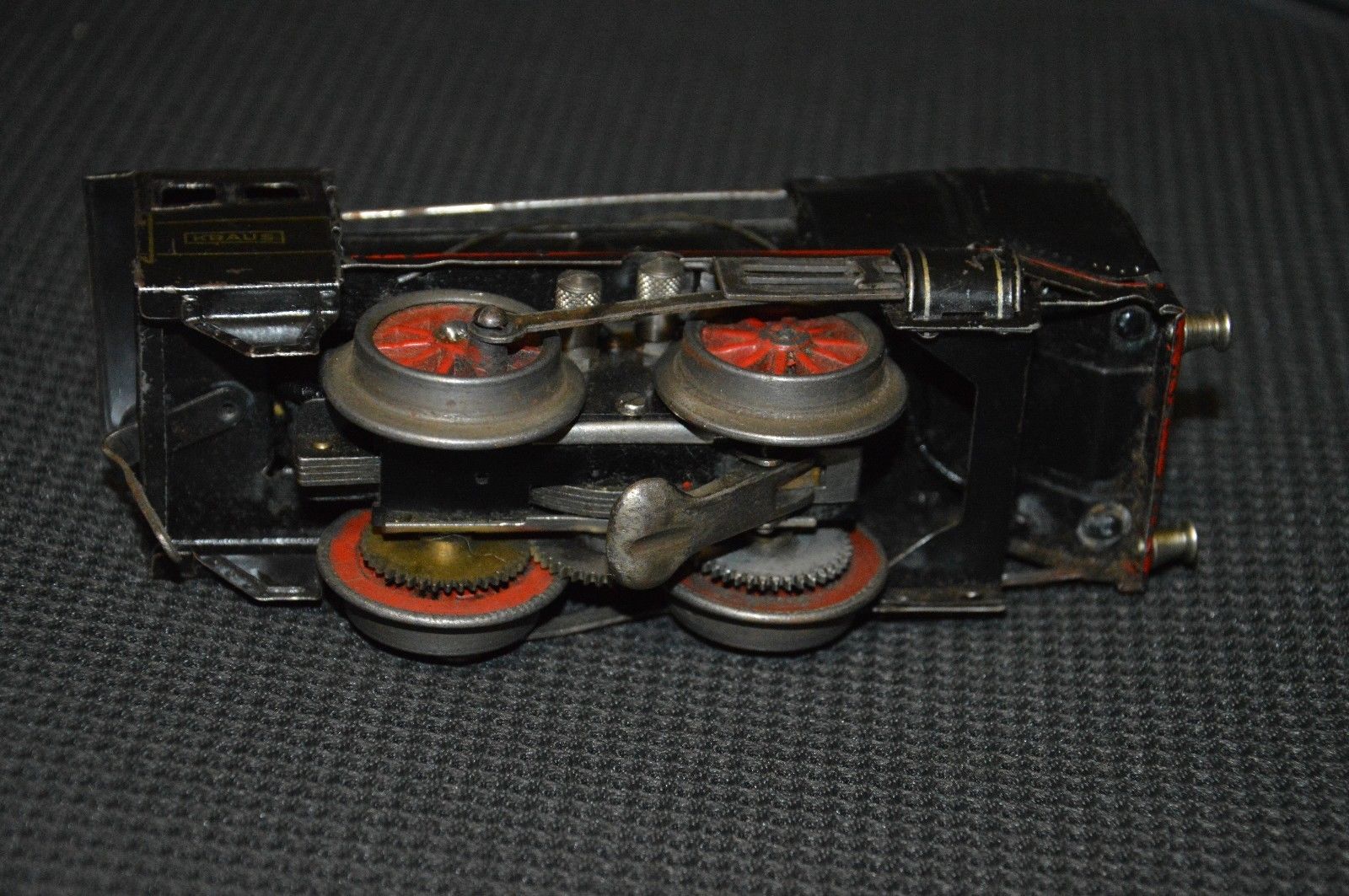 And the pride of the Kraus Fandor collectionbelow...

As a result of the takeover by the Nazi party referenced in your blog ...

A wagon with the logo over-painted by the new Nazi approved owners of the factory ( Keim)  ...Ze Nazi's who didn't want a Jewish name on their toys over-painted the existing stock trademarks before selling it  .. 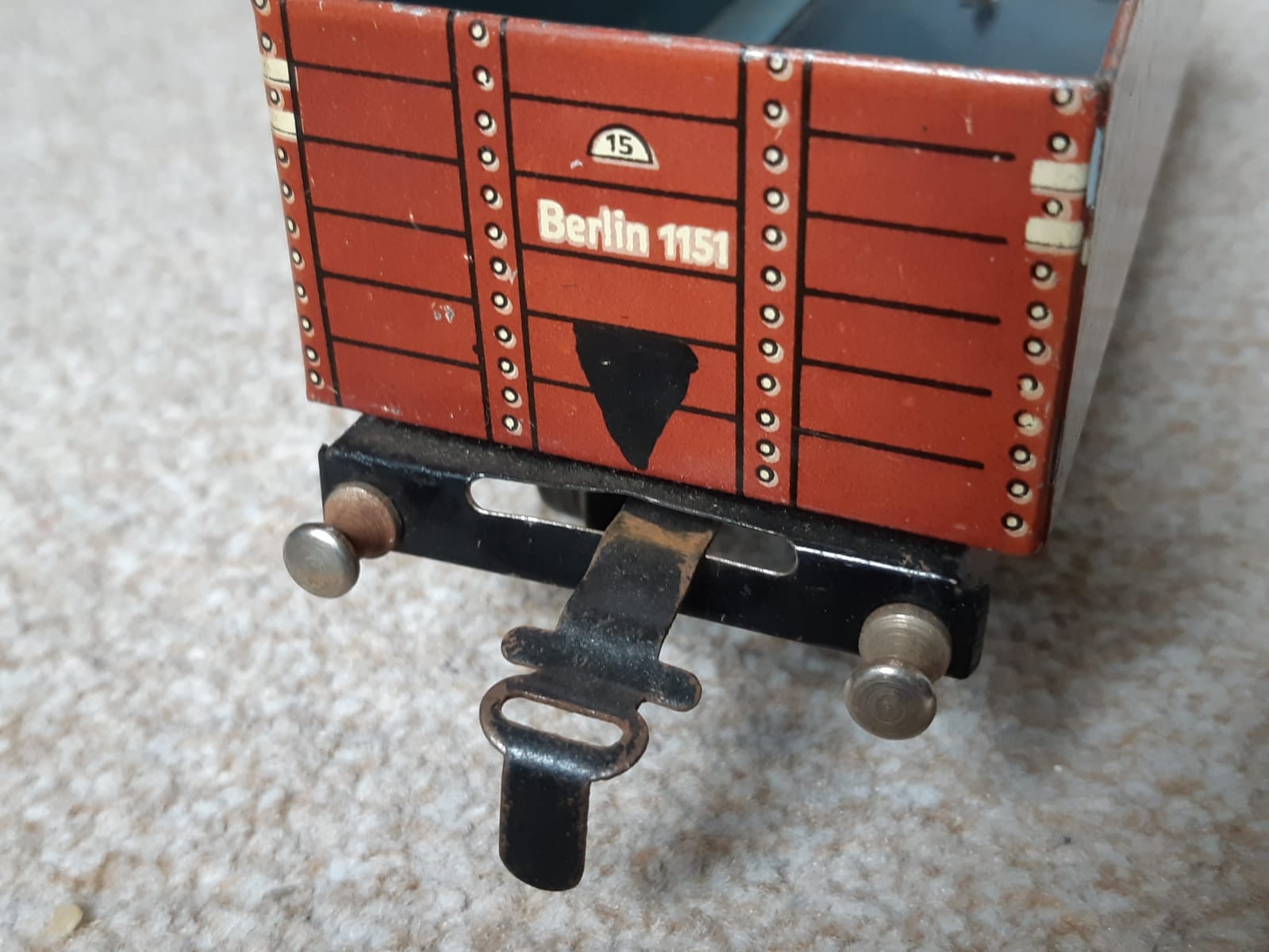 And lurking underneath ( other end of car photo) 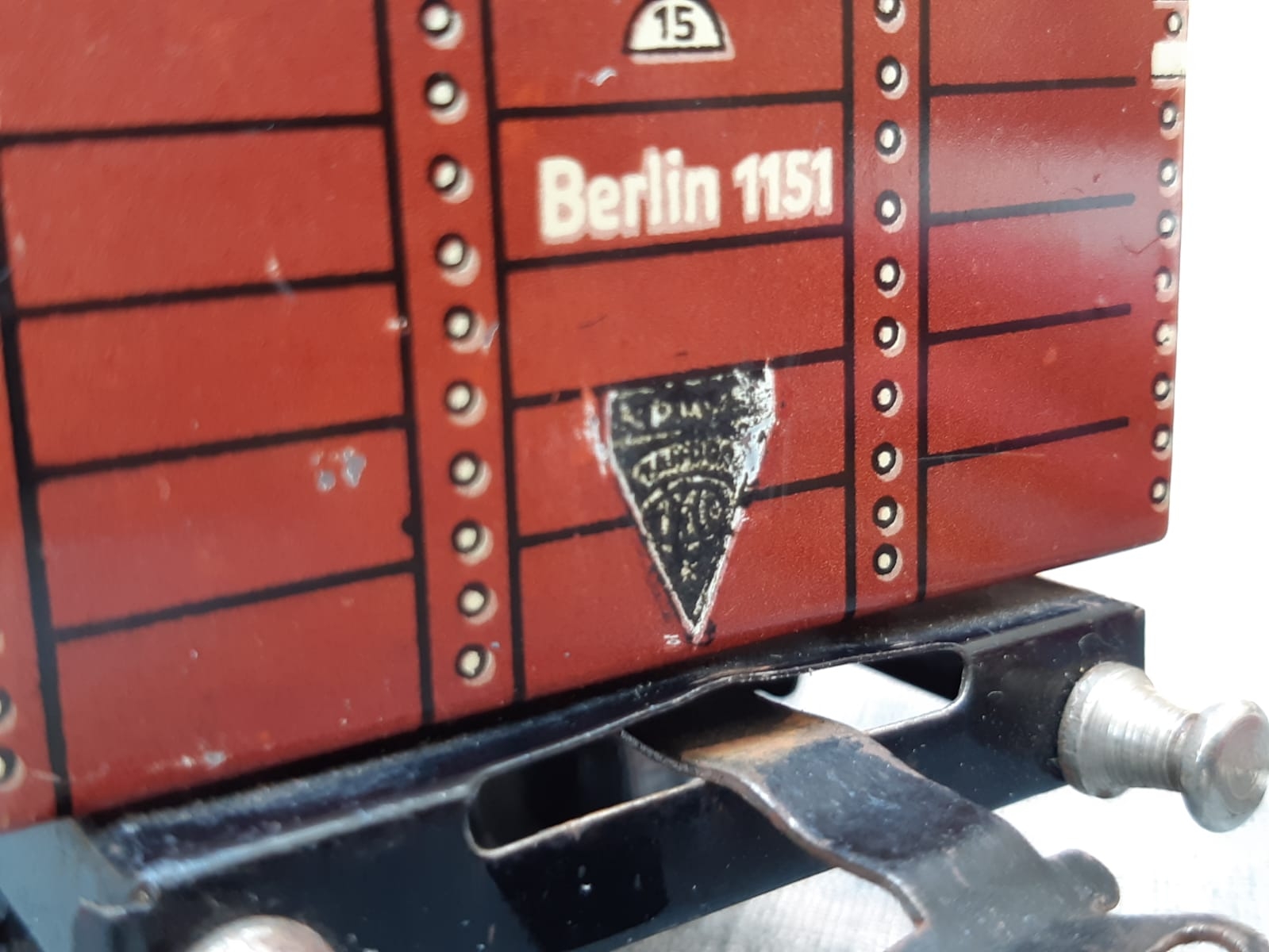 Shame politics even gets our toys involved

A site for people interested in the history etc ..

And, hopefully a less well developed sense of smell.

Well I just discovered this thread, so I thought I would contribute my (very limited) Fandor "collection".  Both of these cars likely date from 1910-1918 as importation stopped with WW1 and of course Fandor became Dorfan in the U.S. Fatman - your "overstamped" gondola is a fascinating piece of (unfortunate) history so thank you for posting.

VERY nice tinplate set!! Near Immaculate! Love the transformer its light bulbs. Nice job with the basic history and the Dorfan connection.

I know that there's evidence supporting that early Dorfan trains sold domestically in the states were produced in Germany by Fandor. More less, Fandor supplied Dorfan while it was starting out, analogous to having "baby in a cradle" until it could walk on its own. Ha.

I also feel that Fandor may have supplied some other companies in the states? I know that Bing did. But I'm not totally sure.

Finally, Fandor trains, or at least trains using Fandor tooling, having the JKCO logo and a "made in Western Germany" were actually sold in the postwar period. These trains are a result of the geo-political situation at the time. The change from the Morgenthau Plan to the Marhsall Plan, roughly coinciding with the 1947 "Reverse Course" in Japan, changed the nature of post-WW2 reconstruction. Initially the Allied plans included heavily partitioning the country, total demilitarization, the disassembly or destruction of industries related to forming a base of military strength, etc... Due to a number of factors, this plan changed to reconstruction and rebuilding of Germany's industry and agricultural output. All that said, the Marshall Plan is the reason that you'll find postwar Fandor(and other German Mfgs. but they hadn't become "defunct" like Fandor) trains that say "Built in Western Germany,(insert U.S., French or British)  Zone"

Your input on Fandor is much appreciated Steve.

How Safe Are Your Model Train Crossings?
3 hours ago

Lionel 2022V2 Catalog to be released Friday, July 15th - preorder a copy from us Muffins
3 hours ago

Original Prewar Lionel Standard Gauge 348 Set With 380 Engine, 428, 429 and 430 Passenger Cars in Dark Green
3 hours ago
How to add lionchief plus board to dual powered can chassis
4 hours ago
Switcher Saturday 07-02-22
4 hours ago

Buy anything cool lately?
4 hours ago
Let us see your Homemade Lionel (or Other) Style Cars or Engines you have Made or Modified
4 hours ago
NEW BLOWOUT SALE PRICES: MTH and Lionel Engines, Passenger & Freight cars (edited 07/02/22)
4 hours ago

Pull out the MPC!
6 hours ago
Did Weaver/Williams/K-Line/Atlas make gondolas?
6 hours ago
Is the Android Lionel wifi camera app available?
6 hours ago

WHAT’S ON THE WORKBENCH AT THE MOMENT
8 hours ago