Page:
Old GoatMember
Thought I'd share three photos of my handlaid track experiment. Most of the tie weathering techniques are from the 2008 Modelers' Annual from Westlake Publishing.

Brother_LoveMember SUPPORTING MEMBERDIGITAL SUBSCRIBER
Matt,
That looks great. I finished my loop yesterday so I can run trains. Now I am going back to add the tie plates. It seems much easier to me this way.
Malcolm
9/6/117:49 AM
❤️ 0

Before too long you'll need a weed sprayer train to come through.

quote:
Originally posted by Old Goat:
Thought I'd share two photos of my handlaid track experiment. Most of the tie weathering techniques are from the 2008 Modelers' Annual from Westlake Publishing.

John AlbeeMember
I'd sure like to know how the "conductivity" would be on the weathered rail. Particularly in DCC.
9/6/113:44 PM
❤️ 0

It may not be long before RCC is practical in O scale. In which case, doesn't matter, at least for powering locomotives.

quote:
Originally posted by John Albee:
I'd sure like to know how the "conductivity" would be on the weathered rail. Particularly in DCC.

LLKJRMember
Come on! Fess up.

On which 1' to 1' railroad did you take those track pictures?

Nice April Fools joke. Now where did you take them?

N&W Class JMember DIGITAL SUBSCRIBER
I had to take moment of pause also Larry...the only thing I saw was that homasote or hard board or what ever in the upper right corner of the photo.
9/6/117:36 PM
❤️ 0
avelMember
I especially like the rail weathering. Wow!
9/6/119:49 PM
❤️ 0
Former Member
Matt,

Stop screwing around trying to fool us with images of real track! (I figure that's about the highest compliment I can give.)

That's the best I've ever seen in any scale....

I'll second Ed's comment. That is spectacularly good work. It is nice track work simply as hand laid track with tie plates. The weathering puts it in an entirely other realm. The ties are just spot on for old weathered ties nearing the last of their service life. The rail weathering is very nicely done. Your choice of ballast nicely compliments the ties and the static grass enhances the overall effect. If you use Lou's joint bars you might even want to drill out a bolt here and there to make it look like a few are missing.

I hope you model the Milwaukee in the 1970s, with some low joints your track will be a perfect model of theirs!
9/7/112:23 AM
❤️ 0
Old GoatMember
Thanks all for the nice comments.

I didn't have any code 125 rail but Ed Reutling was kind enough to donate two short sections. I have never modeled with steel rail but after this experiment I plan to use it on my shelf micro layout. It's much easier to file, takes weathering great and best of all...looks like the prototype.

This test section is only 6" in length and did not involve an excessive amount of time. Waiting for the glue to dry when applying the static grass is probably the most time consuming part but working in sections would minimize wasted time. Per the article in the Modelers' Annual, using a hair dryer on the ties after the washes are applied speeds things up and adds to the weathering effect.

According to the Blacken-It instructions, it conducts electricity, as on wheels and rails. The color on the rail tops is mostly Floquil rust. I'll take some super fine sandpaper and see if it polishes up to the original condition.

Adding joint bars, rail braces, loose spikes...etc. are great detail ideas that can be added as time permits. I cannibalized a turnbuckle from a Ye-Olde-Huff-N-Puff reefer kit, cut it in half and mounted each piece on scrap wire to simulate a rail gauge bar...the photo is in my first post. It's a bit large compared to the prototype. An S scale turnbuckle from Tichy Train Group and .015" wire might be closer to scale.

Thanks again for the compliments.

Excellent work! Would you please explain how you did the grass? Is there an article to reference?

Ray,
Here are the items I used for the static grass:

There's a three part video on YouTube describing construction of the applicator:
Make a static grass applicator with an electric fly swatter

This site describes construction and a modification to the circuit board:
DIY Static Grass Applicator

I did not make the modication to the circuit board because mine seems to work fine w/o it.

Harbor Freight has the fly swatter on sale for $2.99.

I applied the static grass after the ties were colored. Using a flat brush spread the glue between the ties making sure that there is a continuous path of glue. Use a damp paper towel to remove any stray glue from the top of the ties. Stick a nail in the glue, attach the alligator clip from the static grass applicator to the nail, press the button on the applicator then lower the strainer filled with a small amount of static grass within 1"-2" of the glue and bingo...the grass will stick into the glue. It won't be perfect but you don't want perfection or it will look like fur.

Brother_LoveMember SUPPORTING MEMBERDIGITAL SUBSCRIBER
Matt, I am just a little bit angry at you. I was going back to add tie plates after I finished the track. I now have had to put some things aside and devote more time to them, and its all your fault

So much for the "leisurely pace" I had planned. 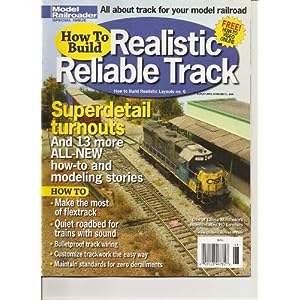 Tom ShireyMember
Superior work....most realistic....very well done. I'd say your "experiment" was a huge success! Tom In Picksburgh
9/8/119:14 AM
❤️ 0
up148Member
Incredibly nice! Ballast can make a big differnce both in color and size and you hit it spot on. Looks absolutely real. Better than any I've ever seen.

N&W Class JMember DIGITAL SUBSCRIBER
I definetly recommend the book Matt posted there, "Detailing Track" by Mike Cougill. There is just a wealth of information in there, a must have IMHO.
9/8/114:00 PM
❤️ 0
Ken RiceMember
That really is amazingly realistic looking track.

There's really only one thing I see that gives away that it's a model - the spike heads are too big and the wrong shape. I think you can get better looking spikes from the proto87 store - they have listed "Precision Milled, Stainless Steel Spikes" for O and S scale.

You have certainly raised the bar for realistic model track!

Ken.
9/8/119:31 PM
❤️ 0
Old GoatMember
Ken,
Yup, the spikes are a bit of an issue but I think the Walthers spikes look better than the ME small spikes, especially with the code 125 rail. I'm still waiting on my order of ME micro spikes but the head size might just be identical to their small spikes.

Initially I tried the Walthers spikes with code 100 rail but was not pleased with the results. I do have the P:87 Stores stainless steel spikes but installing them pushes my patience to the brink. This test with steel rail (vs NS rail) was an eye opener and now I'm trying to decide to build my layout with code 100 steel rail and P:87 spikes or code 125 and Walthers spikes.

Thanks everyone for the nice feedback.

O_Mag_PublisherMember
If you are interested in track and how it can be super detailed, then you might be interested in our new site with a track blog. Please check out Detailing Track. We're adding new content all the time. Please stop by.
Joe - OST Publications, Inc.
9/9/118:36 AM
❤️ 0
christopher N&WMember
Great looking trackwork. How many miles until the end of the line.
9/12/1112:57 PM
❤️ 0
fredswainMember
This thread is too good to allow to slowly fade away into deletion in 6 months time.
1/10/1212:41 PM
❤️ 0
flangerMember
Agreed! Matt's trackwork experiment gave an enticing look at the possibilities to create a level of trackwork realism not often modeled.

Bakersfield to Barstow - Riding BNSF Over Tehachapi Pass
4 minutes ago

New Legacy Santa Fe Northern...anyone got some pics or a vid?
8 minutes ago
2019 Visionline Challenger cab light
13 minutes ago

Please help me find a video
36 minutes ago

Convert my MTH Dash-8 to DCC
36 minutes ago

MIRROR OR REFLECTIVE TAPE ON FLOORS OF LED MODIFIED CARS WITH SILHOUETTES. HAS ANYONE TRIED IT?
44 minutes ago
Is This Placement of a TVS Correct?
46 minutes ago
LA Dodgers World Series Car
46 minutes ago

To paint or not to paint, that is the question.
1 hour ago

My early 1946 Lionel Berkshire arrives
2 hours ago
All Halloween Items on Sale....
2 hours ago

Dilema Removing a Truck From a Lionel Dash-9 Diesel!
3 hours ago

MTH HO Items just shipped to your dealer. Hurry and don't miss out!
4 hours ago

Addicted to BlueRail
4 hours ago