Does anyone know if this paint scheme is correct with silver trucks as shown? Or should the trucks be gray?

The silver trucks is correct, the issue is whether that particular unit had the shield applied to the cab before it was retired. 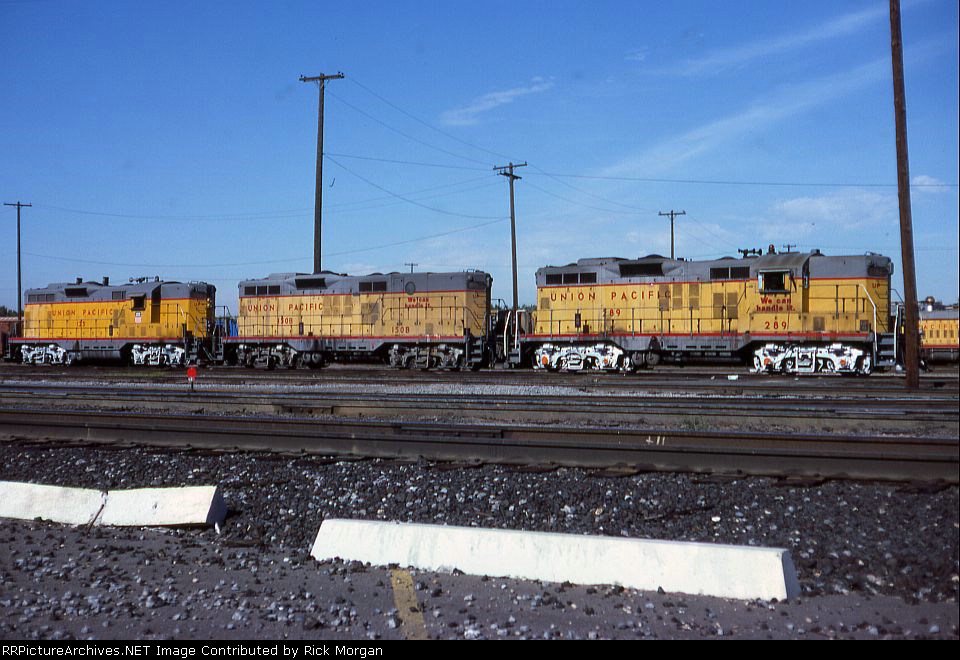 If one is modeling the era of the GP9, i.e. as delivered, then the "silver" (actually the paint was 'Bright Aluminum') trucks would be correct for UP. Just from memory, I believe the UP changed to gray for their locomotive trucks, sometime in the late 1970s.

UP began painting trucks silver in 1953. However, on Feb 15, 1984 the painting diagrams were changed back to gray.  From the Utah Rails site:

"The use of aluminum-colored trucks, dating from 1953, has always been one feature of Union Pacific's trademark paint scheme. In 1953 the new aluminum color was first used on turbines, and from 1954 and 1957 on the newest E9s and GP9s. The use of aluminum paint on locomotive truck assemblies replaced UP's use of Harbor Mist Gray, which was first used on the E6s when they were delivered in 1940/1941, and on the Erie-builts with their delivery in 1945. The use of gray paint was changed to aluminum paint on selected units in 1953 to 1955.

With the projected costs of repainting the entire MoPac locomotive fleet, the cost of aluminum paint was considered, along with its high maintenance costs, since aluminum color wears off rapidly, and must be refreshed at least three times as often as most other colors. To save the added cost of aluminum paint on upcoming MP and WP repaints, in 1984 the aluminum color was changed to gray on the railroad's locomotive trucks. The change to the painting diagram was dated February 15, 1984."

I have those and I do t know if they’re correct. They are nico locos tho. You could just buy it and then if you’re unhappy with the truck color, paint em

I have those and I do t know if they’re correct. They are nico locos tho. You could just buy it and then if you’re unhappy with the truck color, paint em

That's the plan Matt, I've attempted to discover the build date and appears to be August 1954.

As mentioned by Boilermaker1 the shield on the cab might be year specific. We'll keep searching for one.

Check railpictures.net and look for UP geeps in the time period you are interested in. You should find plenty of pictures to help on that site. I use it and utahrails frequently when looking for specific info on UP equipment.

A new video on line now
6 minutes ago

Covid and train loadings/annulments
33 minutes ago

Going Back to the Older Stuff
39 minutes ago
What is going on in the Hoosac Tunnel?
43 minutes ago

Another ERR Cruise Commander hookup question
2 hours ago
Built Up Vintage Kits - Rolling Stock
2 hours ago
Layout shorted, cause found!
2 hours ago
Maybe Something to Think About...
2 hours ago
Photo Chain Game
2 hours ago

A Disassembly after 7 years and now a new layout!
2 hours ago

My PIKO BR 24
2 hours ago
TIU Variable Power Issues
3 hours ago
What did you do on your layout today?
3 hours ago

Mantua's first HO gauge engine the Reading Consolidation 1938
3 hours ago
Isopropyl Alcohol did a great job, except...
3 hours ago

a picture a day....
3 hours ago
Looking for examples of finished Fastrack yards
3 hours ago