I have a WBB GP38 with a rear coupler that has been sagging.  Now it doesn't latch and has sagged below operational level.

I have removed the shell.  How do I remove the rear motor / truck assembly to see what I can do about fixing the coupler without wrecking it?

Thanks John.  That worked.  I have a bent coupler arm in the back of the engine.  I checked the part number 293-E001 (Operating Coupler Assembly) and of course Bachmann is out of stock.

What are chances of bending the notched end straight without cracking it? The part is 2 inches long.

Your chances are slim & none,….and slim don’t look to good,….fortunately, this is a pretty common set up across the manufacturers…..an arm from a MTH or even a Lionel GP7/9 will work as long as you get the matching armature plate …the only thing that holds this all together is a T bar, spring & e clip,….you van use postwar Lionel reproduction parts to get you back running again,..

If you can not get the part or do not want wait to get it this may be a job for JB Weld.  Bend it straight, get rid of paint, scratch or grind it up, apply JB Weld, let cure/dry a day of so, grind off unwanted JB Weld and paint if this works.  You may be able to add additional JBW around the outside edge for more strength if  it will not interfere with operation.

I have tons of magnetic couplers, I suspect I have a few of ones just like that.  Is the 2" from end to end with the coupler closed?  I want to get the right size.

I think the coupler head comes with the knuckle and spring attached if this is the same one (1615-54):

Courtesy of The Train Tender 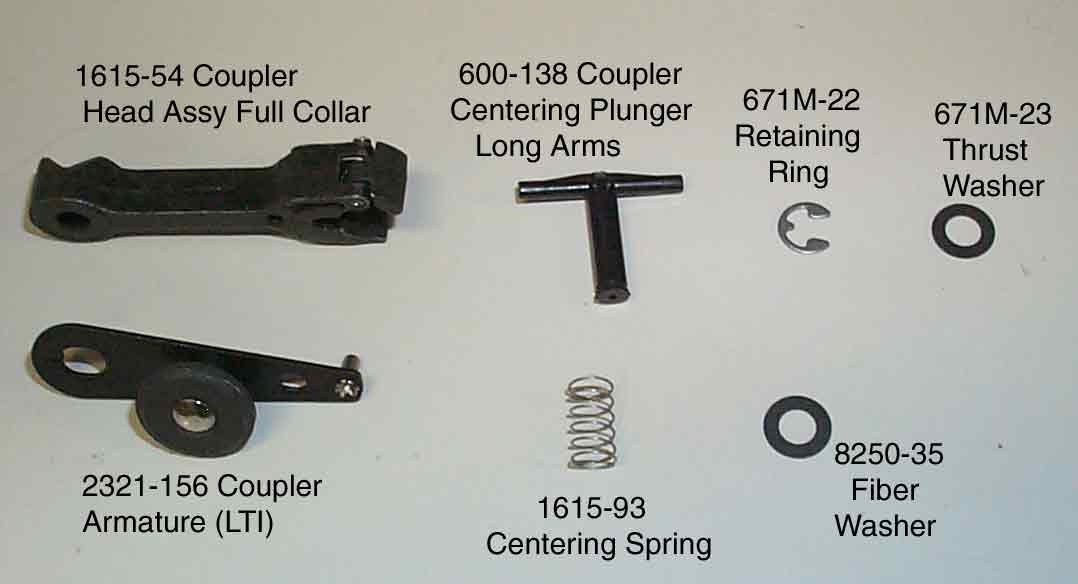 Thanks John.   That's very kind of you.

John was kind enough to send me the above Lionel coupler set to try.  Thank you John

The problem is in the design itself as reflected on the front coupler as well (which is not bent).

There is a known problem (as the search function here indicates) with the pilot constantly coming loose.  That is fixed by using Blue Loctite threadlocker on the screw threads of the single screw that holds it in place.  When fully tightened, there is barely enough clearance for the lever to go down to release the coupler.  It hits the pilot.  I suppose one could grind down the release pin until it worked properly.  Yet even in the correct position the coupler in both the front and rear are too high.  If one lowered them the coupler wouldn't open at all.  Design flaw.

I ended up straightening the bent coupler arm and replacing the knuckle (which was also bent), spring, and rivet.  I reused the original release lever and it works about as good (or bad) as the front one.

There is another unthreaded hole a tiny bit more forward than the threaded hole for the pilot screw, perhaps that could be tapped and used, but I don't know how the pilot would look.  It might allow more up and down movement of the release lever for the couplers.

If anyone has done a complete rework please let me know.

Thanks for all the advice and help.

Sign In To Reply
Post
Cab2 Base Backup
2 hours ago
What did you do on your layout today?
2 hours ago

Buy anything cool lately?
6 hours ago
DCS Remote - won't power up
6 hours ago

Fandor anyone?
9 hours ago

Atlas O Susquehanna Bay window caboose #2001748
12 hours ago
WHERE to sell or WHO to use to liquidate huge train inventory?
12 hours ago

Just got this for my birthday
12 hours ago

Any interest in Golden Gate Depot doing a run of these PRR passenger trains?
13 hours ago

MENARDS - ALASKA FLAT WITH HELICOPTER
13 hours ago
All Topics