I want to install front & rear headlights (warm white LEDs) in the existing mock headlight housings atop a Lionel 520 Boxcab, lit by track power taken from within the body shell and tapped from the loco's AC motor.  It may not be easy (or possible) to make the headlights directional (front and rear facing) via the onboard e-unit, so I'd be content with all four headlights lit in constant-on mode. Has any FORUM member done this?  If so, your suggestions welcome.

General models did directional lighting in the 50's with incandescent bulbs. If one side of the field is grounded, which Lionel tends to do, then one motor brush will have a higher voltage relative to ground than the other brush. In the opposite direction, the other brush will be higher. You can use that as a basis for directional capability.

Having said that, since LEDs run on low voltage, typically 3 volts or so for white, this system may not work as well as it did for incandescent bulbs.

Rather than use a simple resistor for an LED, there are two terminal current regulators that look like transistors. They will light your LED properly regardless of track voltage.

I am not talented enough to draw pictures on a keyboard, but you can hook them up like this:

Do the same with brush two:

That should do what you want as simply as possible. The two pin 20ma regulators are available from Digikey and other online suppliers. The diode can be any 1N400X series and it is there to prevent back voltage on the LEDs.

Thanks for a prompt and positive response. I temporarily wired one lead from an LED lamp to ground on the 520, and wired the other lead to BRUSH 1 (brighter) and then to BRUSH 2 (dimmer). As you said, when I reversed the e-unit the light output changed accordingly.

I'll shop at DIGIKEY for the parts you mentioned. With appreciation,

Should be easy. I would cut round "glass" (clear plastic) over the bulbs on the head lights. The K-line by Lionel had head lights. You might want to add a horn and bell if your going to detail it. Don

Thanks for those tips.

I have a metal horn and bell that I intend to add to the roof of my Lionel 520. I'll also add clear plastic lenses to cover the small LEDs that I'll soon install inside its headlight housings.  I have a horn/bell sound card and speaker on hand, but it's too big to fit inside the small 520 body shell. Acoustic realism has limits ...

I intend to use the 520 loco to pull a non-motorized track cleaning car around my L-shaped layout. I'm toying with the idea of hiding the sound card and speaker in a following car equipped with pick-up rollers wired to the sound card. Two Lionel Sound Activation Buttons (already installed on my L-shaped layout) would trigger the horn/bell sounds anywhere on the layout.

Although it would probably be easier to buy a K-Line boxcab via eBay, it would be more fun to DIY.

I must be not understanding something, there should be plenty of room for a small sound card in the Boxcab.  We are talking about this one, right? 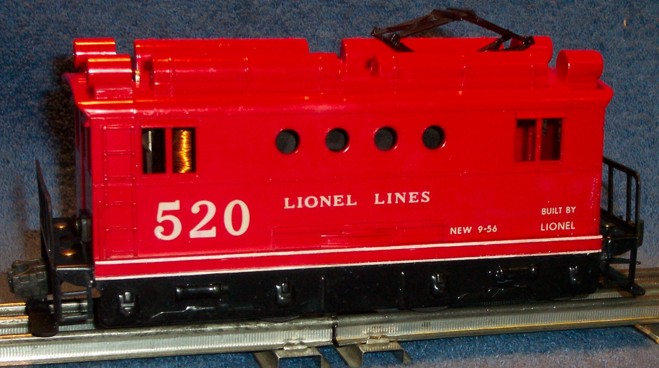 John, I thought the same thing. I got all the electronics in my little steeple cab so the #520 has a ton of room. The old Lionel steam motor does take more space than you would expect but it should still fit. I'm still looking for a #520 shell if anyone has one. It doesn't have to have the pantograph, body tabs or any frame. Don

Admittedly, my grasp of spatial geometry is tenuous. The sound card and its accompanying speaker (and a recommended speaker baffle) SEEMED too big to fit inside the 520 cab.  However, I didn't actually test-fit it, so I'll try that reality check ASAP. I'll report on my progress.

Remember, you can use a different speaker and baffle if necessary.  The sound card is pretty small.

How about some pictures of the guts to give us all a look, it's been years since I had one of those apart.

I did a test fit of the horn/bell sound card and its 2-inch round speaker inside my Lionel 520 Boxcab today.  As requested, pix are attached. The sound card could be squeezed inside the cab shell, although it would be a very tight fit -- taking care to avoid any part of the sound card circuitry touching the motor or the grounded frame. The speaker is the problem; its 2-inch diameter "spills over" the metal chassis platform by a 1/4 inch or so; the shell can't be re-installed properly. A photo shows the "spill over." There's no room inside the cab to mount the speaker on the inside surface of the roof.

Maybe an OVAL speaker is available; perhaps 2 inches LONG by 1-1/2 inches WIDE, at 8 ohms. That size would fit, and soldering the two wires from the sound card to it would be easy to do.

Another approach ...
The Lionel SECURITY CAR (3535) has an onboard cab that looks identical (except for its decor and roof-mounted machine gun) to the cab of the 520. The 3535 cab is mounted on a flat car with a rotating searchlight. Idea ... use the 3535 as a follow-on car to the 520 and put the sound card inside the mostly-empty 3535 cab body shell -- the result: a sort-of-matched pair. The 3535 already has pick-up rollers, so I could tap into that circuit as the source of track power for the sound card.

Good golly, no wonder!  I wasn't thinking of the huge RS2.5 board set!  I was thinking along the lines of the ERR RailSounds Commander, it's tiny! The speaker that comes with it is a 1.5" speaker with a nice baffle, that's all you'd need for good sound.

Thanks for the recommendation of the ERR board and speaker. I'll check it out online.

At least we cleared up the confusion why the sound board wouldn't fit.

I'm repainting a Lionel 520 Box Cab and fitting it with 4 LED bulbs (2 front/2 rear) and have a wiring question. Connecting the ground wire to the chassis is easy. Regarding the power connection, can I just solder that wire to the area I've circled in black below on the e-unit?

Appreciate your comments, in advance. Thanks. Yep, just make sure you add the resistors and a diode so the LED's last more than a few milliseconds!

Thanks, GRJ!  Yes, the supplier included all that with the LEDs.

I'll be dang nabbed. And yet another kewl thing. ERR RailSounds Commander. Who wouldda thunk! and AND Lionel 520 BOXCAB? Never-have-I-ever.

GRJ, thanks, you have a multi-relational-data-bases-hard drive in that head of your. Amazing.

Now, Lashup50, do the lights change from front to reverse? How does one wire the e-unit for that please? Great project! Great help, Great photos. Great, now I want that one as well. (Thinking back to the post, 'If you saw one, what would you have to buy and take it home with you")

@Miggy Check out this thread, should help you figure out how to wire the E-unit for directional lighting: https://ogrforum.ogaugerr.com/...-for-postwar-engines

Note that the lights will all be dark when stopped, that's the penalty of not having power in that instance.

I'll be dang nabbed. And yet another kewl thing. ERR RailSounds Commander. Who wouldda thunk! and AND Lionel 520 BOXCAB? Never-have-I-ever.

GRJ, thanks, you have a multi-relational-data-bases-hard drive in that head of your. Amazing.

Now, Lashup50, do the lights change from front to reverse? How does one wire the e-unit for that please? Great project! Great help, Great photos. Great, now I want that one as well. (Thinking back to the post, 'If you saw one, what would you have to buy and take it home with you")

Hi Miggy, no, I'm not planning to go the directional lighting route here. I'm told that it's easier to set that up with LEDs if you run DC; I run everything on AC, which I'm told is somewhat more complicated to set up for directional.... and then there's GRJ's comments about the lights going dark.

Sign In To Reply
Post
how rare is the Lionel 165 crane with gray tower instead of silver?
1 minute ago
Sunday Scenic Showcase April 18, 2021
14 minutes ago

WHAT TRAINS DID YOU RUN TODAY?
48 minutes ago

Train shows in Illinois, Indiana, Wisconsin
60 minutes ago
Anyone else surprised/disappointed by the color of MTH’s Canadian Pacific Military Heritage engine?
2 hours ago

GGD Superliners... which one preferred?
6 hours ago

Universal Meter Box for Layout or Workbench
7 hours ago

My new “layout”
7 hours ago

Great Northern railway
7 hours ago
October York week
7 hours ago
a picture a day....
8 hours ago
Help Guide - What to do if Lion Chief Locomotive Stalls when Activating Operating Track, Uncoupler, or Crossing Gate - Expanding an O Gauge ...
8 hours ago

CLEARANCE FLASH SALE! additional 8% off ALL WILLIAMS!
10 hours ago