Hello all. I've been in the background and attempting to learn a little more since I signed up. 1st post. Thank you in advance for any assistance.

Last weekend I soldered two “Postwar” toggle controllers to determine the correct way. One “Postwar” toggle the way it was originally. The other the way the O27 "Vintage" toggle was soldered.

The “Postwar” toggle controller as soldered originally throws the track in both directions. Good news. Unfortunately, both light bulbs stay on all the time. Bad news.

Using the “Postwar” toggle controller as the way the O27 controller was soldered didn’t throw/ switch the track.

YouTube has several videos for O27 switches. None of the ones I found address what I’m attempting to do.

Up until last Christmas my Lionel starter set from the 70’s was perfect. I love the fact it still works. Then my son, 6, asked if we can expand the layout. I said “Yes we can!” and quickly realized the shortcoming of DC, small transformer, with a larger layout (i.e. it doesn't work well). We agreed to expand using the O27 brown tie tube track I have and postwar cars. In February 2021 we purchased a rebuilt ZW transformer and #2046 Steam engine.

Together this past Summer we purchased a few more cars, track and switches. During one of these excursions, it was suggested we use the “Postwar” toggle controller to add color some color, additional interaction for my son, and more easily see which way the track was positioned.

P.S. I’ve been having difficulty signing into the forum. Allen and Rich have been very helpful. Apologies in advance if I have a delayed reply to any clarification questions.

You can use the O22C to throw the 5121/2 switches, but as you noted, you will not get accurate position feedback on the illuminated bulbs. This is because the O27 switches of any era were not designed for positional feedback like the O22 switches. The closest one could get would be the 1122C, but that only keeps track of the toggle commanded throws mechanically and not actually tied to the switch position and so it can get out of sync.

Bottom line, you cannot get positional feedback to the controllers from stock O27 switches.

Yes, totally possible & works perfectly, BUT the 022C controller will not show position. The switches will work best if the bulbs are removed. 1122C or 1121C controllers can be used as described by bmoran4.

The 1122 single sale LH & RH blister packs sold in the mid 60s were packed with special 022C controllers that had been gutted of their bulb mounts/bases and had non-functional red & green globes affixed. Once in a while you will stumble across these oddballs in collections/lots. 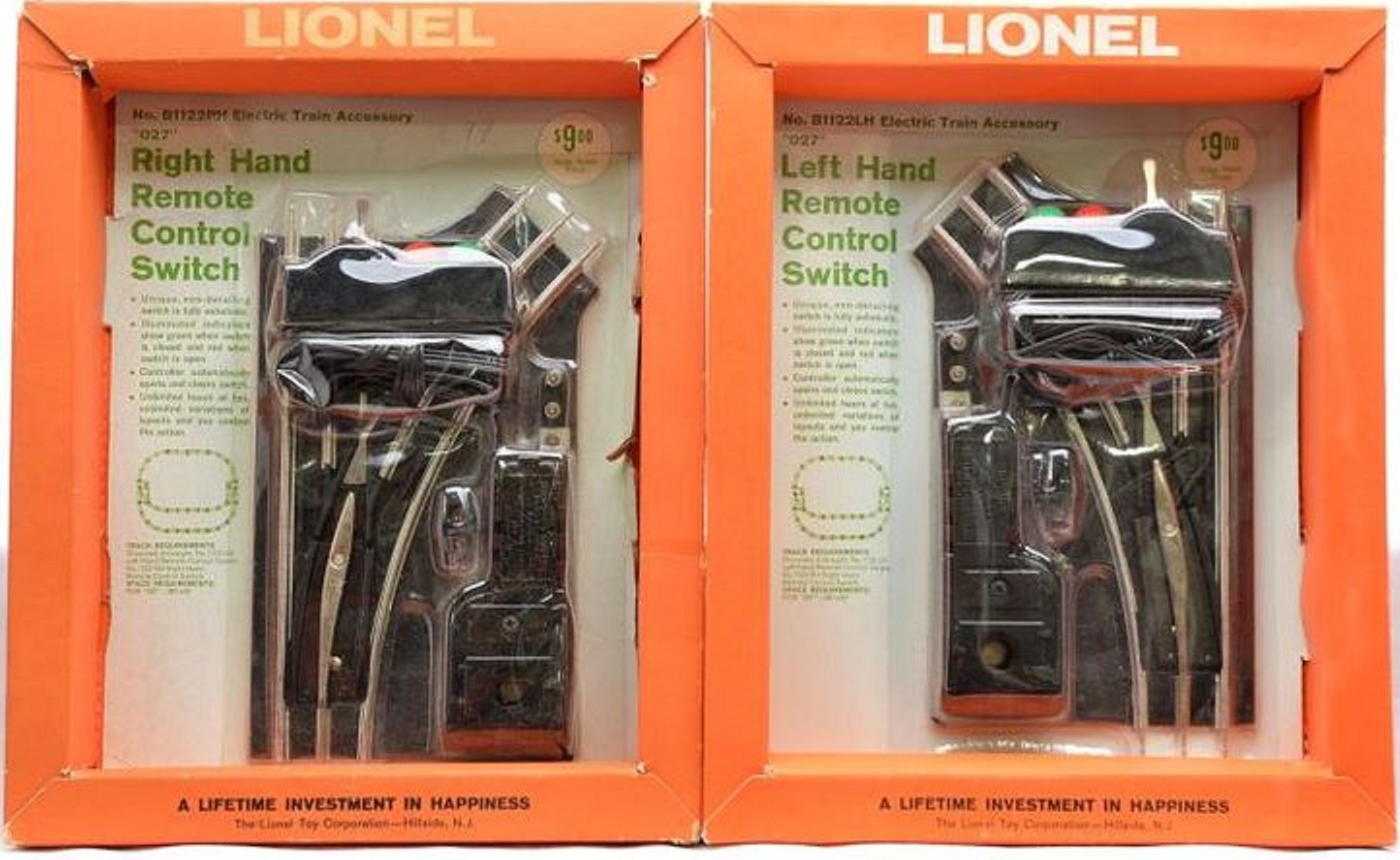 bmoran4 and ADCX Rob, Appreciate the reply. Net/net...it is not possible based on how items were originally manufactured.

Follow-up question: Can either one, or both, of the items be modified (i.e. opened up, wires cut, resistors added, etc.) to accomplished the desired outcome?

For example...I've seen a video which allows the O27 track switch to be modified for constant power.

I'm not aware that many undertake this challenge as this and many other reasons lead one to leave true O-27 behind go full O gauge with the O22 style switches or go more for 3 rail scale setups. At most, some persistent users will upgrade their O-27 to constant voltage, but it is a bit of effort.

The only thing I am aware that approaches your ask, but it is far from a tried and true methodology, is what was teased here: https://ogrforum.ogaugerr.com/...l-light-modification

bmoran4 and ADCX Rob, Appreciate the reply. Net/net...it is not possible based on how items were originally manufactured.

It is possible, but you would have to do what K-Line did by adding an internal switch for indication.

K-Line O-27 switches all have the feature(s) you desire, including provision for fixed voltage operation. They come with 022C type controllers with bulbs that show position.

Great find. Thank you for sharing. I posted a comment to that thread. The video looks to have 7 or 8 wires involved so that not to bad. Of course the real challenge is knowing how they all get connected. There's hope. ; )

If you're not too far into the project, check out the 1121 prewar/postwar switches. They accomplish everything you want to do mechanically. On the motor/solenoid is a slider that blocks out one of the lights, giving a signal indication. Same goes for the controller. Only issue with these is you lose auto reverse functionality - but that's not hard to wire up on the divergent tracks.

@SteamWolf, the 1121 does not have any provisions to provide positional feedback to a remote panel - it is all mechanical and so the 1121C or 1122C controllers with mechanical shutters can get out of sync as noted above:

The closest one could get would be the 1122C, but that only keeps track of the toggle commanded throws mechanically and not actually tied to the switch position and so it can get out of sync.

I have both 5121(2), and 1121's on my layout. None of my switches have indicators on the controllers except two with dummy lenses.  The 1121's do at least have an lit indicator on the switch. A simple option is to wire them all the same so that when you push the lever down, the path is straight, and up is divergent. Helps a bit.

I looked at wiring these with constant voltage. It is a process that I found not worth the effort. You have to open up the switch body, and cut and splice the solenoid wires. If you have the wiring diagram it explains the steps in detail.

Welcome to the Forum BTW. Appreciate the welcome. Impressive panel setup. Plus it looks like you have several other switches/ controllers off to the right for additional accessories.

Consistent wiring for uniform outcomes is positive/ possible alternative. Helpful for my son and me as well.

As for the dummy lenses, I find it interesting that Lionel was able to market the product like that. Not knowing any better, the outsides of the boxes based on the picture/ image can easily have one believe the light functionality is part of the product.

Part of my interest in the toggle light functionality is to create a bit of a game when we are "playing train" with my son. He's building several Lego structures for the different cities. I'm crafting various phrases between the train engineer and the yard master. This may be wishful thinking and in the end we may just "play train" for the enjoyment of it. ; )

If you're not too far into the project, check out the 1121 prewar/postwar switches. They accomplish everything you want to do mechanically. On the motor/solenoid is a slider that blocks out one of the lights, giving a signal indication. Same goes for the controller. Only issue with these is you lose auto reverse functionality - but that's not hard to wire up on the divergent tracks.

What do you mean by "auto reverse functionality?" Not sure I have that now with my one engine. Reverse requires 3 steps 1) power to turn off, 2) turn on and off, 3) turn on for reverse.

What do you mean by "auto reverse functionality?" Not sure I have that now with my one engine. Reverse requires 3 steps 1) power to turn off, 2) turn on and off, 3) turn on for reverse.

Jeff, I meant in the switches. The ones you currently have will throw the switch into the direction of the incoming train, if on one of the divergent tracks creating an auto-reversing loop.

SteamWolf, Appreciate the clarification. Yes the anti-derailment feature. I find that it comes in very handy.

In the "anything is possible" realm, (the next phrase being "given enough motivation, time and money") you can certainly get lamp indicators on a control panel to report switch positions.

Possibility #2: install a mechanical linkage, such as a piano wire, from the swivel rails to an external set of micro switches mounted either above or below the table.

A simple alternative to Lionel/K-line switches are Marx 1590, 027 or 034 switches, that work work well with a separate power source and  hook up with three wires, one being the common.

They do not use much current as they have no indicator lights, have a low profile and foot print and are inexpensive.

The direction can be determined by looking at the switch, if it can be seen.   One has to remember which directions they are set, if not visible, meaning Marx 1590 switches are not for dummies!  A track diagram control panel helps with memory.

I know none of the above will help with Lionel or K line switches.

Your Favorite Smoke & Why
1 hour ago

Via Rail's "The Canadian"
2 hours ago

Does anyone remember who made “Eggliner” gondola trailers?
3 hours ago

Wish list for the next Lionel catalog
3 hours ago

Lionel's Warbonnet F3's...Variations Inside and Out
3 hours ago

Children in your scenery
5 hours ago

Power for New Layout?
5 hours ago

MTH PREMIER NORFOLK SOUTHERN TANK CARS ALL 12
7 hours ago
Lionel 2022V2 Catalog to be released Friday, July 15th - preorder a copy from us Muffins
8 hours ago

Tell Me About Standard Gauge...
8 hours ago