I picked up a K-Line Santa Fe. It had a DC transformer in the box, which made me wonder about the motors on this. Can I use this on my 3-rail (Fastrack) layout with a CW-80 transformer?

Just want to make sure I'm not going to damage anything before trying.

Anybody have a great link to helping me identify different motors? The motor runs on DC however you need to look inside to see if there is an electronic e unit.  That converts the AC to DC.  it probably has one but it never hurts to check.

When I open it up, what am I looking for?

OR it's also possible someone replaced the circuit board with just a bridge rectifier, so that the engine runs forward only on AC power from a transformer.

Though I can tell your locomotive has been altered, as the directional lockout switch that is factory installed in the hole on the underside of your engine is missing.

As best as I remember, Kline never built anything that was DC only. I have several of their products and consider myself a Kline customer (back when they were in business, obviously). Lionel offered some DC engines years ago, maybe in the seventies, but it was sort of an experiment. Lionel did not offer O gauge DC products in a really significant way.

As best as I remember, Kline never built anything that was DC only.

This just surfaced in another thread. There may be more. 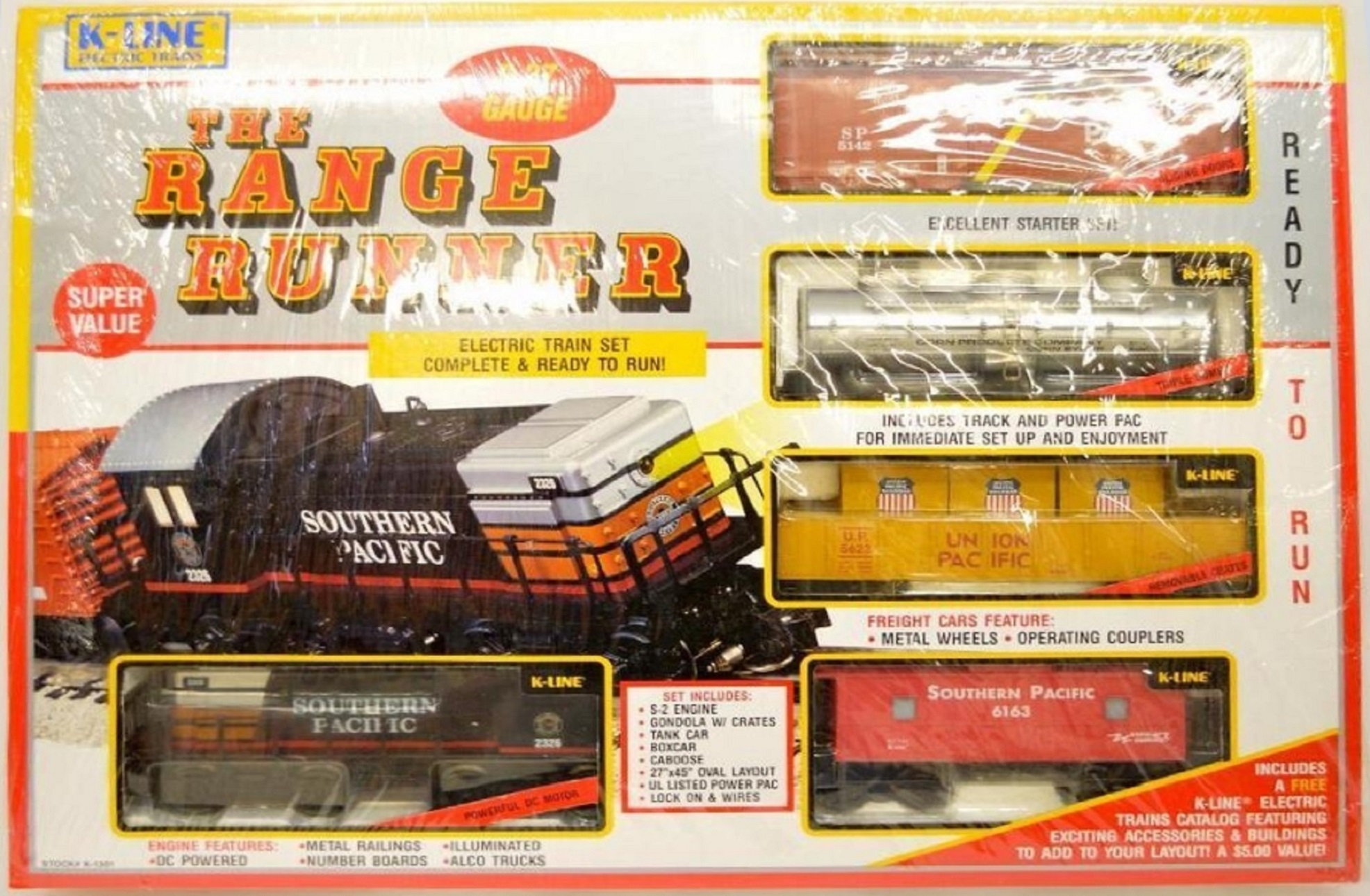 If you had the lead unit, they run on AC.  However, you only have the slave unit.  If it has a horn, it has to be AC as there's no way to trigger the horn with DC on the rails.  Here's the set on Graham's Trains: https://www.grahamstrains.com/...o-AA-Diesel-Set.html

This just surfaced in another thread. There may be more.

According to the K-Kine somewhat overpriced history book this is the only set (1301) that had a DC motor.  It was done to get the price down.  The book was published in 2000 if I recall.

As best as I remember, Kline never built anything that was DC only. I have several of their products and consider myself a Kline customer (back when they were in business, obviously). Lionel offered some DC engines years ago, maybe in the seventies, but it was sort of an experiment. Lionel did not offer O gauge DC products in a really significant way.

I have a DC operated Lionel Set from 1995 called Badlands Express. All DC came with a small DC transformer, about the size of a cigarette pack.

I also have a Lionel Snoopy / Woodstock handcar and a Charlie Brown / Lucy handcar. Both DC. They were also from the 1990s.

Lionel did not offer O gauge DC products in a really significant way.

I have a DC operated Lionel Set from 1995 called Badlands Express. All DC came with a small DC transformer, about the size of a cigarette pack.

Lionel cataloged DC sets every year 1973-1991. The Badlands set(1990-1991) was one of three sets offered in the last year DC sets were offered. Those little black power packs were just like the contemporaneous Bachmann power packs.

All Lionel handcars since(& including) the original # 65 will run on AC or DC.

What Gunrunner said. I happen to have that Alco(77A)and the other half of the pair, 73A.  It runs on AC and when the lead unit and slave are hooked together via the tether you get 4 motors. However, I can't remember which is the slave unit and, like John said, you need the lead unit to run them both. The "brains"(electronic e-unit?) are in the lead unit, which can run by itself and has a tether coming out of the back.

73A would be the lead unit, it has the reversing switch.  Note from the posted pictures, the hole for the reversing unit switch is covered over on his 77A unit.

Yeah, Gunrunnerjohn is right (and also StevefromPA). I hadn't thought about the Double A version when I made my first post above. I stand corrected. The circuit board in the lead A in those units is also a larger board for running both units. Some of those double A units with 4 motors also had K-Line's short-lived "Real Sounds" and that sound board (a rather large board) with speaker was in the trailing A unit.

And just as an aside on the DC only train sets: Did anyone notice the SP box car in the Range Runner set is red? It has the same number as the much more common dark brown version of the same car. K-Line didn't do this as much as Lionel did. Though some of the hardest-to-find 5000-series rolling stock are those issued in the later K-Line sets that had shorter production runs and were made in smaller numbers. In that vein, the Illinois Central MP-15 set comes immediately to mind.

Lionel did the same thing with some of their DC only sets. There was one set that came with an orange colored Erie Lackawanna plug door boxcar instead of the typical grey. The only place you could get the orange one was in that set. Some of the other Lionel DC sets had other cars that were unique to those sets only. Are these cars worth big money? Not really, but very typically sell for a little more than the usual more common short 027 cars that had greater availability.

You’re right, John, Was too focused on looking for the tether and missed that. If I recall correctly, There’s two switches underneath- one for the e-unit and one for the horn. The 73A/77A AA Alco was a “budget” item- I think it was 129.99, and just had the horn, no “K-line Realsounds” or Lionel Railsounds. Also, it’s from 2005, by which time I think K-line had ceased “realsounds” in motive power-possibly altogether- as they had a licensed RAilsounds from Lionel. Remember, this was right before K-line closed up, aka they usually weren’t skimping on features even if the price was low- unless stated otherwise as is the case here. When K-line by Lionel came out, there was “TrainFX” which was put in lower priced units and was kind of served a similar function to realsounds.

changes to payment system - how do people plan to adjust for sales on the forum?
7 minutes ago
Multiple power strips
23 minutes ago

Buy Black Legacy Module or Mod a Blue one?
25 minutes ago

What did you do on your layout today?
27 minutes ago

Where is BNSF's GP units?
1 hour ago

Books for sale
2 hours ago

Trying to identify a train.
6 hours ago
TMCC diesel engine jerking when going forward... Reset and no better.
6 hours ago

Horse and mule car
7 hours ago
Why do trains look awesome above eye level?
7 hours ago

Which Class A are you looking at in the new catalog?
7 hours ago
3D Printed Block Signals - LED wiring and Connectors Added
7 hours ago

Pull out the MPC!
8 hours ago
Anyone know how to remove the radar antenna from a 16652?
8 hours ago

Which legacy engine is best? Camelback or ten wheeler?
9 hours ago
All Topics