I recently painted a Railking ES44 from the GE Evolution demo paint scheme to Canadian Pacific liveries. It ended up looking beautiful and I now have a CP ES44 with the 'golden beaver' logo and the green charging lights. Not 100% prototypical, I know, but it looks amazing on my Canadian themed layout. 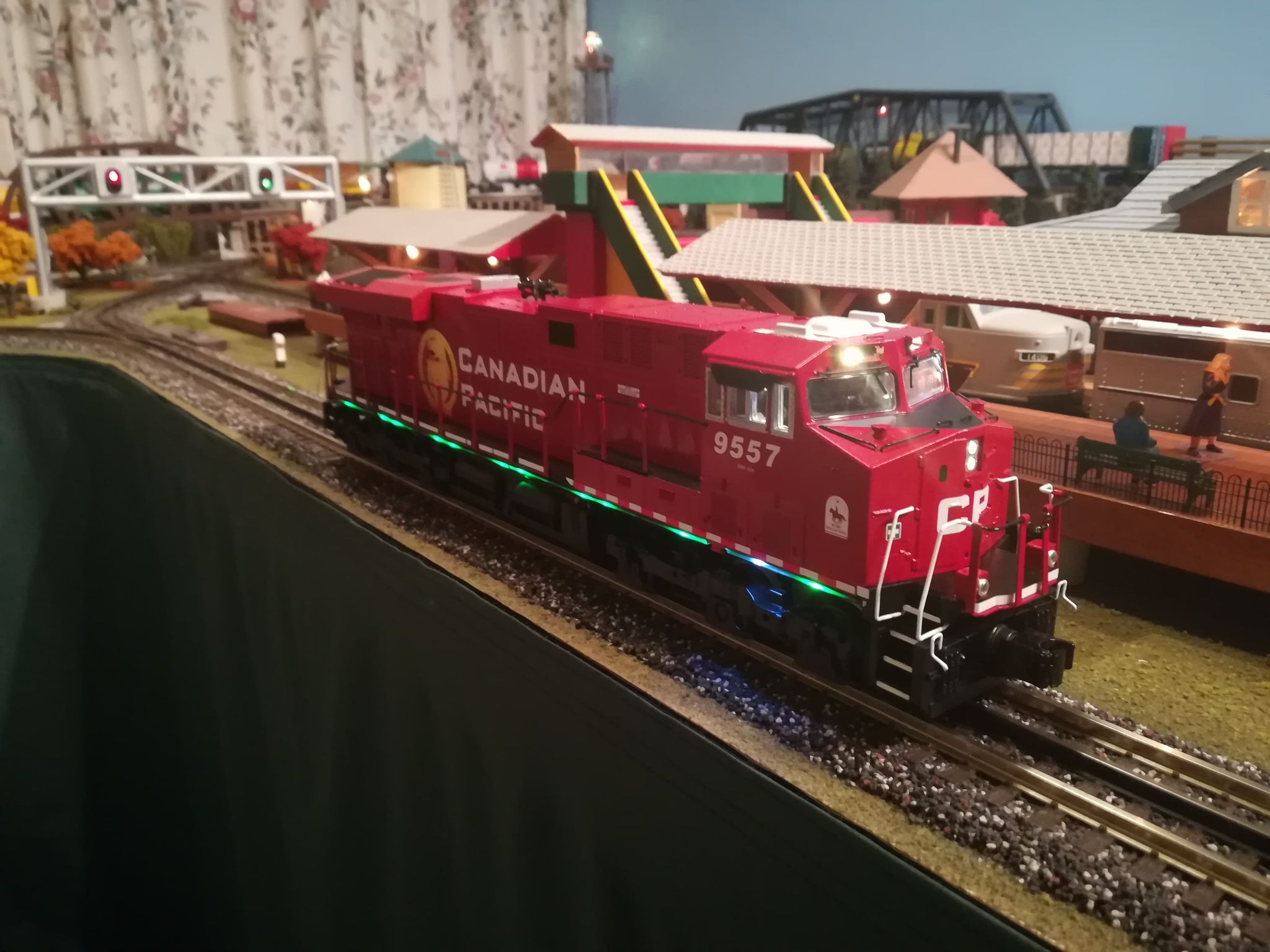 Painting it properly involved disassembling the entire engine body. The re-assembly went smoothly and the engine works perfectly again, with the exception of the right ditch light. Those tiny LED boards for the ditch lights are very fragile, and unfortunately, one of the wire leads broke off when attempting to slot it back into the ditch light housing (which is a very tight fit). 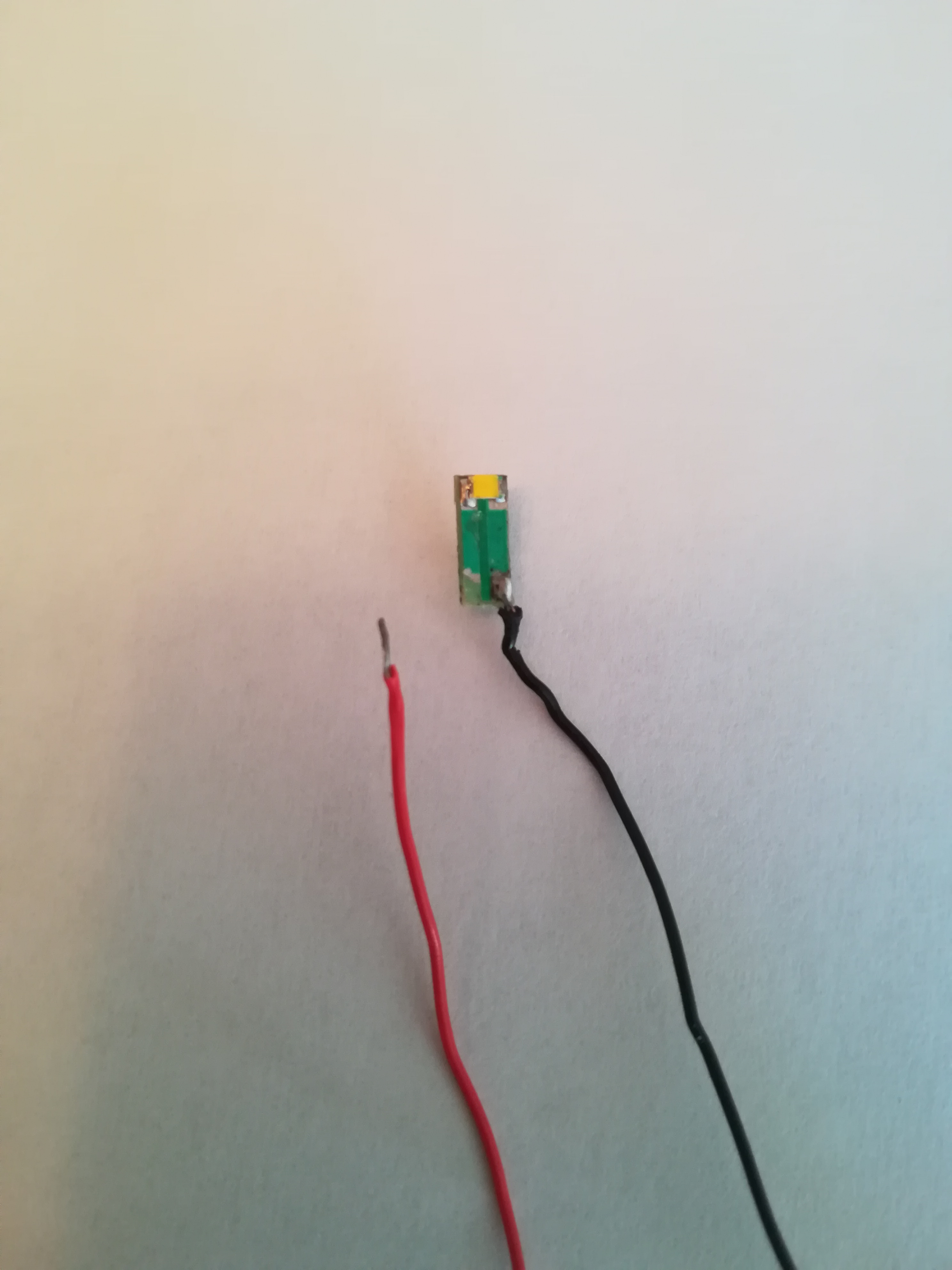 So my question is: Is this repairable?

The obvious solution is to re-solder the wire onto the board, but the piece is so incredibly tiny that it would be difficult to get right. Also, the metal plate on the board where the wire was initially attached seems to have fallen off as well, so what exactly would I solder the wire to?

I've tried holding the tip of the red wire up to the tiny sliver of silver connector still present on the board when plugged into the engine while the ditch lights are on (difficult to do by the way, since the engine has to be moving forward for the lights to activate), but the LED remains off. Can I hook the leads up to a battery for easier testing when not connected to the engine? If so, what voltage of battery?

Alternatively, am I better off just getting a new LED? I assume this piece wouldn't cost too much, but finding the exact same item sounds difficult. Googling the part number yields no useful results.

Any help would be appreciated!

If that were mine, I'd scrape the solder mask off next to the missing pad and solder to that.

If that were mine, I'd scrape the solder mask off next to the missing pad and solder to that.

That worked perfectly! Thanks Gunrunnerjohn!

I had no idea it was possible to scrape off the green coating that was covering the electrical contact. I soldered it on, carefully installed it back in the engine, and now it works wonderfully.

Comes from working with PCB boards most of my life.

Glad that worked out.

Is color of LED dependent on voltage?
4 minutes ago
(03/02/21) New! Amtrak Station from Menards!
5 minutes ago

Trains with Dad
5 minutes ago

Mike Wolf's Political Trains
24 minutes ago
What did you do on your layout today?
27 minutes ago

WAREHOUSE FINDS! (in stock but weren't listed) check it out-
48 minutes ago

Upgrading an old TIU
1 hour ago

5 x 8 fastrack update
1 hour ago
DCS system about to drive me crazy!
2 hours ago

This Close Call Takes The Cake
2 hours ago

WHAT TRAINS DID YOU RUN TODAY?
9 hours ago