The manufacturers of the Jeeps for the Armed Forces, like Ford, crated them and shipped them on flat cars to be assembled by the troops receiving them..... Check out these photographs..... MTH released their flatcar with three crates each marked as Jeeps on their way to the troops. They're offered in 4 road names, Pennsylvania, New York Central, Union Pacific and US Army.

There are individual cars, two road numbers each, and two 6 car sets for each road name. All of these are in stock and on sale at MrMuffin'sTrains! Do the crates have jeeps in them or are they empty?

Thanks, I already ordered enough today!

Good information, thanks!  Being a Jeep fan, I all of a sudden like the NYC cars.

Thanks, I already ordered enough today!

I loved your comeback to rboatertoo. Very good. It put a smile on my face.

I loved your comeback to rboatertoo. Very good. It put a smile on my face.

That's because I learned it from YOU!

The manufacturers of the Jeeps for the Armed Forces, like Ford, crated them and shipped them on flat cars to be assembled by the troops receiving them..... Check out these photographs.....

The first and last photos are of a scale model, I think it was 1/35 scale. I have seen it before but can't recall where (I think it was on the g503.com forum). The color photos of the 'crated' Jeep was of a display made by a military vehicle group to show what a crated Jeep would look like, at the 1997 Memphis Military Vehicle Preservation Convention, put together by Richard Grace and the Atlanta MVPA chapter. That one was a mockup of what one would have looked like, made from a restored Jeep and lot of reproduction parts. Rommel Juan from MD Juan (a reproduction Jeep source in the Philippines, making pretty decent stuff) also made one with all reproduction parts his company makes.

The b/w photo was of a real crated Jeep.

Most Jeeps never got put into crates. Among the ones that did, most (if not all) went overseas on ships. Almost all (if not 100%) the photos that exist of them being uncrated were taken outside the US.

FYI, main production run Jeeps for the military were only ever built by Willys and Ford. they were known by model designations MB and GPW, respectively. Wheeled vehicles didn't have M-class model designations until after WW2 was over.

And before someone chimes in with what Jeep owners refer to as "the $50 Jeep in a crate story" whereas the friend of someone's Uncle's, neighbor's, college roomate's, brother-in-law supposedly bought one new in the crate long after WW2 for less than $100. That never actually happened. It's an urban legend that has long since been established as 'busted' by research from several historians, including one who offered as much as $20,000 for just evidence of one bought new in a crate after the war. After decades of the offer being made, nobody so much as even contacted him to ask how the reward could be claimed.

Yet, there's always someone who says they know of someone who actually got one. Here's how that plays out. The person who swears it happened, if pressed enough will almost certainly have:

We all know how urban legends happen. This one simply won't die. All those ads we all saw in comic books about cheap Jeeps were simply to purchase government surplus lists, something that was free if you knew where to write for them. There were also some scams going through the 50s, but all that happened was people got ripped off badly. The scammers made people believe, "someone" got one and that's likely where this insanity was born.

Nobody ever, anywhere, bought an uncrated WW2 Jeep for any amount.

That's an old Army joke. I'm sure some bored GI's tried it (there was a longstanding legend of a soldier who declared a M-16 missing in 'Nam and mailed it home piece by piece and the wife, not knowing why he was sending it, had a gunsmith friend assemble it and mailed it back to him in operating condition, no idea if that ever happened).

No way you would have gotten anything as big and heavy as the transfer case, engine, transmission, diffs, frame and other large parts that couldn't be broken down further out of the country by Army mail without the boxes being inspected.

A college friend bought one crated up from a surplus place in Denver(?) in 1962.  We spent a summer putting it together.  Has to replace all the rubber and fabric parts and completely flush the engine , transmission, and differentials, and he painted it black and orange.  We made a plywood and 2X2 top for it and used it for hunting. Yeah, moving a nuclear weapon, on an open flat car?

That's a "Fat Man" (later designated as a Y-1561), twenty-kiloton nuclear weapon. The unarmed casing for the Nagasaki bomb was never moved by rail that I'm aware of. It was big, but could be (and was) moved by airplane and truck. Unlike the "Little Boy" used on Hiroshima, the case for this bomb (designated F31, along with several backups for various reasons) was flown from Kirtland AAF to Tinian Island where it was armed and then dropped by an B-29 ironically named, "Bockscar."

But no, it never rode a flat car.

I love the sign! Should have a destination painted on it too!

YES, Radar did finally get all of his Jeep pieces and it took 11 years to assemble it.  Rumor has it that he plans to use it as a trade-in on a Tesla Model S.

MrMuffin'sTrainsMember Digital SubscriberFORUM SPONSOR
I still have tons of these flats in stock. Just saying.
9/22/158:29 AM
❤️ 0

breezinupMember
Originally Posted by p51:
Unlike the "Little Boy" used on Hiroshima, the case for this bomb (designated F31, along with several backups for various reasons) was flown from Kirtland AAF to Tinian Island where it was armed and then dropped by an B-29 ironically named, "Bockscar."

The Bockscar is in the Air Force Museum at Wright-Patterson AFB, Dayton, OH (the Enola Gay is at the Smithsonian). The aircraft was assigned to aircraft commander Capt. Frederick Bock and his crew; the name was a pun on Bock's name, of course. 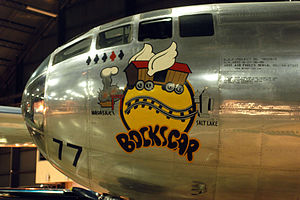 Anyone know where I can get the chains with springs that secure the crates on these cars?

I have some older cars missing those chains & would like to get replacements.

Sign In To Reply
Post
Does every Lionel locomotive come with a locomotie memory module?
1 minute ago
What I've Been Doing for the Last Five Years
2 minutes ago
Lots of New Premier + Vol. 2 Preorders + Memorial Day Clearance EXTENDED!
5 minutes ago

How do I get an ATLAS O Locomotive to run with the Lionel Cab 2?
10 minutes ago
Ground bar as terminal block
11 minutes ago
CPR GP-9 from Lionel UP Legacy GP-9
13 minutes ago

Any Big Difference in CAB 1L and Legacy system for Newbie???
30 minutes ago

a picture a day....
2 hours ago
Track detector
3 hours ago

Whoa.. look at this centipede beast being assembled
3 hours ago

DCS - what route would be best
7 hours ago

Derailing thoughts
7 hours ago
Ives Black Diamonds ..Standard and O gauge
7 hours ago
Documentary: The rise and fall of Penn station
8 hours ago

Did Lionel go 'generic' with Railsounds?
8 hours ago