Interior of a Blue Bird not to mention rush hour at Coney Island...

...or maybe that would be Happy Hour!
cheers...gary

You really come up with some great photos.

The first one is at Chatham Square before the rebuild with the flyover for the South Ferry branch. When this photo was taken, third ave trains going to and from South Ferry crossed on grade

The second Photo is at the W 23rd street Ferry Terminal. That is a NY Railways Green Line car running on the 23rd st Crosstown line. This car had the distinction of stopping in front of Madison Hardware. Service ended in 1936 when parent, 5th ave coach substituted buses for the service.

The third photo is during the great 1947 snowstorm, december 26th i think/

The Blue birds were a real modern car way ahead of their time. In the 1930's They worked on the Fulton Street line in Broolyn before the A train was built.

Not sure about the Brooklyn El photo. It almost looks like downtown Brooklyn near Sands Street.

I was thinking that the large buildings in the background were downtown brooklyn but i suppose it could look like that from about 36th street looking towards downtown. From the photos i have seen of the station and trackage at the location where the 5th ave and culver line trains split at 36th street, it could have been a substantial structure like in the picture that could have stretched between 5th and 4th ave. West end trains operated through here before being connected to the 4th ave subway. Also i guess the 36-39th street yard was located in this area as well. Think it was constructed about this time

Here is the Fifth ave El at 36 st.  Culver coming in from the left. Ben...those are really great pics!!  If I had to do it over again, I would have much more elevated on the layout.  I tried to model the older looking structure like in some of the pictures above....boy are those neat photos Ben...

That photo is a puzzler. I looked at it again. Two things to consider in locating the photo. It appears to be construction associated with the Dual contracts and the structure looks like its at a pont where there is a station but not with a center platform. I would say its about 1915 or so in time, about 20 years earlier than the photos you posted later. The second point is that this construction was not in a street but on private right of way and there is no existing rail line in the street that one can see. The buildings in the backround suggest it is near downtown. The Culver line in the vicinity of 36th street ran on private right of way over towards Ditmas Avenue. If its marked 4th avenue, the location doesn't seem right. Did the 3rd ave extension of the 5th ave el have any non center platforms?

I really think the caption is wrong on that  The construction looks nothing like the 5th ave El or anything else around it.  I have a feeling it may be Myrtle Ave

Can you guess where this is The new picture is South Ferry The 2nd and 3rd avenue trains are on the left while the 6th and 9th ave trains would be on the right. There was a connection between the two systems and you can see that in the foreground. Looks to me it was taken about the point in time when these lines were being electrified.Interesting to see telephone pole in Manhattan!

As for the earlier photo, the only place the Myrtle ran on Private Right of way was North of Wycoff avenue and it was two track in there with center platforms I believe. This photo shows an el structure with 3 trackways but local platforms.

Only private right of way I know of was the original Culver line from Mcdonald ave to 9th ave  Later became the Culver shuttle after IND connection.  It did have outside stations I was thinking the same thing. Maybe it was 14th ave. Was there a station at that point on the Colver line?

Can you guess where this is

its South Ferry in Manhattan about the turn of the century.

Wallabout would be a pretty cool modeling subject  The Lackawanna, Erie, Pennsy, NYC, Lehigh Valley, CNJ , NYO&W, BEDT and B&O all had a presence there.  The Lackawanna owned its pier and yard but the others shared it ala a union terminal.  The Federal government claimed it in 1940 to expand the Navy Yard.  That 4001 loco looks pretty weird with that giant pantograph on top of a little engine. First, let me thank you for starting such an awesome thread. Our region is so rich in railroading history. I can lose myself for hours researching it. Thanks again.

That last picture you posted intrigues me. Might that be 207th Street? Here's one of my favorites, the Jersey Central freight terminal in the South Bronx.

Here's a link to a great site about it. 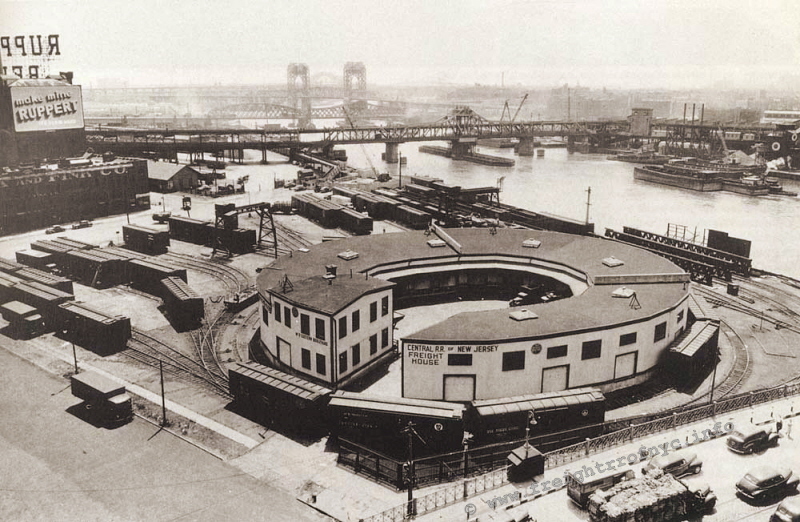 This is 11th Ave in Manhattan  Little crowded for street running 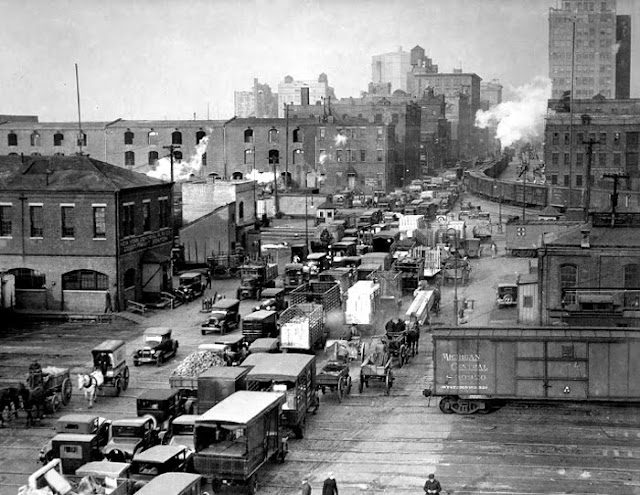 The guy on the horse was a rule to lead the train.  Most of them were Italian imigrants and wer known as West Side cowboys 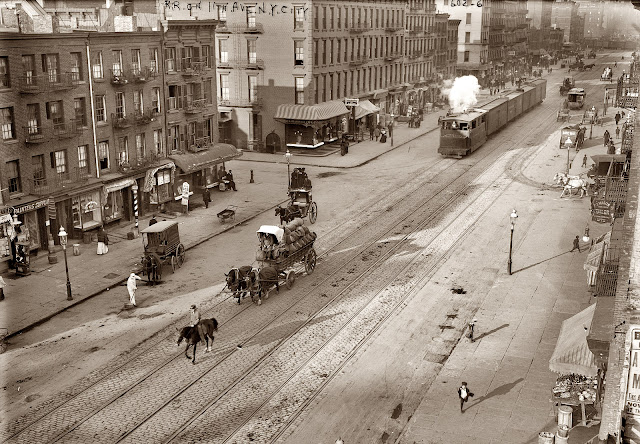 OK I got it from a very reliable source  Joe Frank posted these for me. it is looking SE (in direction towards Prospect Park further SE) along 10th Street from between 3rd Avenue towards 4th Avenue and the building of the sub-steelwork of the new IND 4th Avenue Station (later encased in concrete and brick) of the IND huge viaduct portion over the Gowanus Canal.  View is about 1929-30. Hey Guys...these photos are out of this world. I visit these places all the time. as i live in Queens, New York. plus a big visitor to the HellGate bridge . what a view from up there. A great bridge indeed. have been going up there since 1983. Keep up the great work. Thanks for sharing these great city shots!

Mystery solved. If you look into he distance on the earlier photo , you can also make out the bridge at 4th ave. The walkway in the center in the newer photo is interesting.

For you, a photo of the bridge under construction and an aerial view looking north toward the Bronx:

Some fascinating stuff!  Thanks for posting!

This one is pretty Good  The original Grand Central Terminal Not exactly "vintage" material but since we had a few **** Gate Bridge posts, I thought this impressive night view of CP's Holiday Train on the bridge was worthy of inclusion:

What year did this happen?

I've seen photos of CP's train, but never so much as a suggestion that it ever got near the Northeast, much less actually within NYC's boundaries.

The CP Holiday train would be on its way into Queens. Pewrhaps it was going to the Fresh Pond Interchange with the New York An Atlantic and the LIRR. One of eight S2 diesels sent off Island, mid 70's due to the MTA take over. Your second photo looks like Hanover square in lower manhattan on the 2nd and 3rd ave els line going to South Ferry. There is a gas lamp on the street under the el .

These are Brass LUV cars I run at my club Love that twin stack ferry, Dongan Hills. Built 1929 and served until 1965. I rememeber riding on her across the bay.

Wish list for the next Lionel catalog
5 minutes ago

Removing shell of a VL GS-4
33 minutes ago

Getting Started!
36 minutes ago

Recycled Computer Display Monitor Control Panel
46 minutes ago
how rare is the Lionel 165 crane with gray tower instead of silver?
1 hour ago
Marx tinplate question
1 hour ago
WHAT TRAINS DID YOU RUN TODAY?
2 hours ago

Train shows in Illinois, Indiana, Wisconsin
2 hours ago
Anyone else surprised/disappointed by the color of MTH’s Canadian Pacific Military Heritage engine?
3 hours ago

GGD Superliners... which one preferred?
7 hours ago

Universal Meter Box for Layout or Workbench
8 hours ago

My new “layout”
8 hours ago

Great Northern railway
8 hours ago
October York week
8 hours ago
a picture a day....
9 hours ago
Help Guide - What to do if Lion Chief Locomotive Stalls when Activating Operating Track, Uncoupler, or Crossing Gate - Expanding an O Gauge ...
9 hours ago