Note the name of this forum.  I think you're in a place different from where youthink you are.

Note the name of this forum.  I think you're in a place different from where youthink you are.

Um... if that was aimed at me... I think you missed the tongue-in-cheek part of it. (Hint: If you'll read my comments in this thread, a thread that I started, you'll see that I'm actively in the market again for Postwar.)

Don't know where to ask this, and I don't want to start a new topic, so I'll just ask it here:

Lionel 6026W tender: Are front/rear footsteps available to replace those that are broke off?

Same question for the other PW whistling tenders.

If you haven't already check out Choo Choo auctions. Charlie has been do this for a long time. Prices and appraisals are reasonable as is shipping,

Andre...so glad to read that you are gearing up for postwar train running.

Curious if you have more affinity for steam engines, or diesels?  Good luck jumping back in!!!!  And some advice about turds that split up trains...such as separately selling the engine, tender or the A units without the B.

Learned from astute Mrs RedJimmy...ask/tell them you want both at a fair price...if not, YOU MOVE ON! Dont waste your time. After all you have the $$$ (thats leverage),  and they have something to sell, or cart around another umpteen years!

Over the years since my 3-rail experiments, the allure of "traditional-sized" trains, especially select PW Marx and Lionel pieces, has been residual within me.

For the immediate future, "running" will only be on a small loop set up on the kitchen table for piddle-playing and testing purposes. In the upcoming months, I'll be acquiring track on an "as can" basis, and eventually, I'll restore the ability to run trains on the existing "around the wall" bench work here in this 2'6" x 9' 6" "computer room".  In order to do that I will need to re-install the hinged drop-down bridge so as to have continuous running. (But I saved all the parts to the hinged drop-down bridge upon disassembly after the last experimental effort.)

As for steam or diesel?

Well, Lionel's PW Hudson steam engines that were based on the Berk boiler (including a Berk "one of these days") as well as the shorter "Baldwin" boiler Hudson's are my favorites among the postwar steam offerings. I'll start with those when it comes time to purchase.

As for Lionel PW diesels, I prefer the downsized "traditional" engines that better fit the 6464-type boxcars. That would mainly be the cast frame and stamp frame FA's. I am not interested in any "scale sized" equipment, either engines or rolling stock. Migrating toward "Hi-rail" was my downfall when I seriously explored 3-rail back almost 20 years ago.

Marx: Wouldn't mind at all having a #333 smoker and possibly a few litho diesels.

As for non-PW engines of interest would be MTH Railking "Stubby" F3's, and an RMT "Bang" Alco S-2 or two. OR, in time, perhaps any "traditional" sized Williams FA or what have you.

Long term: I fully intend to make progress on my HO layout and enjoy it as long as I dare before making a HUGE decision as to what to do with it once the "Hassle Factor" has overtaken the "Fun Factor". In meantime, hopefully within a few months I'll have double main continuous run loops w/switching here in my computer room upon which to scratch the 3-rail itch.

Hardest part will be dealing with some "take aways" that accommodating 3-rail will entail.

This thread is really starting to drift. (I'm the culprit!) I wonder if I should start a new thread that's specific to my layout ideas/plans, options, input on same, pictures, etc? If so, which forum?

Hmm, has me thinking I should take off work Wed 22 Jul & attend that local train auction nearby....

Um... if that was aimed at me... I think you missed the tongue-in-cheek part of it. (Hint: If you'll read my comments in this thread, a thread that I started, you'll see that I'm actively in the market again for Postwar.)

Sorry.  I'm a literalist about what I read.  That's a big downside of email groups - can't see the face so miss the humor.

No worries mlaughlinnyc.  I sort of take some getting used to.

6-28627 C&O Berk Junior for 0-27 (or similar JR) can/railsounds/conventional (I don't think its full tmcc..??)  I park it's tender powered for the cycling and bell. I was used to hearing a switcher bell for hours on end, non-stop. The two toghether make for a soothing symphony of ambiance when the rails get quiet fiddling, etc.

... the old Berk is kinda long in wheelbase and needs 31or 36 curves period.

Talk about prices and climbing. The 333 takes off every time I look serious at one.  Same with a Wyandotte streamiliner w/ Indian brave logo and Marx Mercurys. They were giving away sets a while back for what todays beaters may fetch. I would settle for a cheap shell of either about now. Ol Yella, the cheap bump and go trolley eludes me and the new died WAY too soon for another round of those yet.

Wanton spending can effect the bid costs imo, driving prices up artificially until a broad sampling can once again accurately show the averages. A lowball win does the same. Neither truely reflect market value imo; just some luck, some  greed, or apathy.  (I dont hound for last minute lowballs or walk away from yard sales giggling with a $10 boxed 2332 in tow either)

Just because you can throw some weight around, doesn't mean you should beat up the whole playground daily to be 1st thru last in line on the slide . 🤔

Some folks even overbid just to put the thumbscrews on others. Not to shill, but because they like to taste tears.

Well, I think y'all were right: Patience, and keep watching.

I actually wasn't ready to take the plunge and purchase just yet, but I was curious about the pricing and sale prices of the 2055/2065 type Lionel PW "Baby" Hudson's, so I have been frequenting the Bay, as well as the sale site at the link provided above.

As expected, the "Buy It Now" and "Opening Bid" prices on the Bay were way "up there". Prices were much better at the other site, but typically the models needed some help, or were being offered with non-whistle tenders. (Whistling tenders are essentially a "must" for me and Lionel PW steam.)

However, over on the Bay, a couple/three standard auctions appeared. One auction was a package deal. Long story short, I placed a bid that I felt would result in an acceptable price point for me, and surprisingly, mine was the winning bid and the sale price was lower than my maximum bid I had entered!

SO, I ended up purchasing my first PW items in years: A 2055 engine, a 2065 engine, and a 2046W tender for less than any of the decent looking 2065 w/tender listings! Quite surprising. In this one purchase I was able to obtain two engines that were on my long term "find/purchase" list, as well as a 2046W tender. They should be shipped tomorrow.

I'm really looking forward to their arrival. I really enjoy the heft of Lionel PW steam and I enjoy tinkering with them. (i.e. Cleaning them up, fixing any issues, tuning them, etc.) Can't wait! A few years ago I parted with my 665. (Pictured here shortly after I had cleaned it up and serviced it.) I've regretted selling it several times since. This time, I intend to keep my Postwar purchases. My wife can feel free to sell them after I no longer have a need for them.

I know that PW prices can be a bit on the high side, but...c'mon, man!

Andre, 20 years ago I followed the same path you are on now. HO most of my life but decided to get the Lionel set I had as a kid. For the first 5 years or so I was totally satisfied with traditional trains.

These are a few of my Hudsons that include Williams and K-Line. One you may not be familiar with is cab number 5340. Its a 2046 mechanism with an engine shell and tender offered by Charles Ro. Its truely a baby 700E closer to a NYC Hudson than the Berk body 2046. 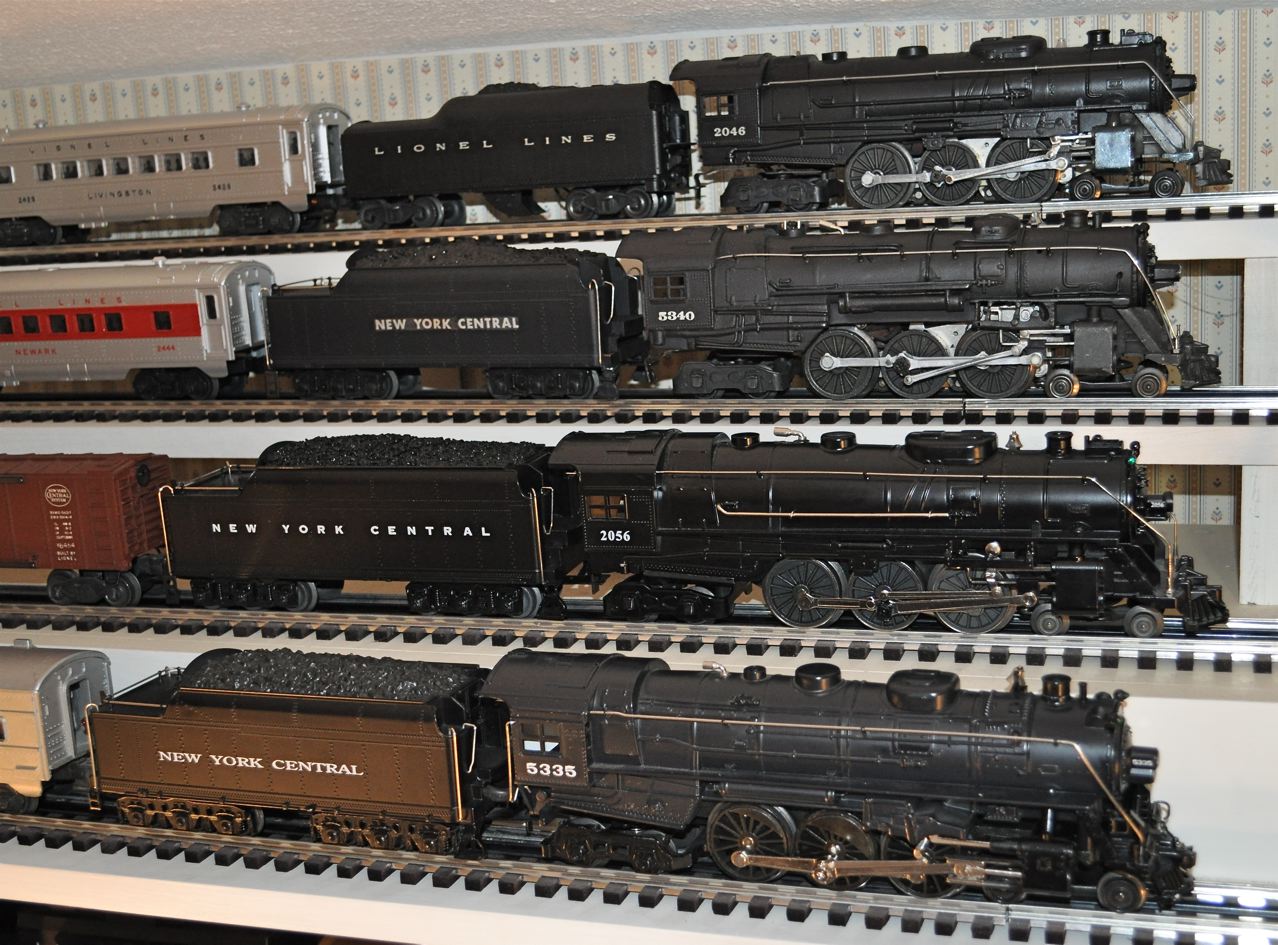 I know that PW prices can be a bit on the high side, but...c'mon, man!

I did notice that there are zero bids!

Zero bids are not unusual.  I get some and that's not a problem.  Anyone who sells a lot and doesn't get some zero bids is probably starting too low.  I make he opening price the absolute minimum that is worth while when including my time for packing and shipping.  Sometimes during the ten days of the auction no one comes along who is willing to buy at that price.  But then I set the same price as a buy-it-now and eventually it sells.  That just means the buyer willing to pay that price wasn't looking during the ten day auction window.

Here's a completed auction yesterday for a postwar Alco Santa Fe 223. Anyone know why such a huge price? I believe I read several days ago in a "postwar" posting thru Collector's Weekly that the #223 was considered to be the rarest of the SF Alcos. Really? Not to trample on someone's idea of a good loco, but those Alcos are like child's toys compared to much better running, better looking, better detailed early postwar Alcos that were ditched by Lionel by the mid-to-late 50s. You need to be a stamp-collector to want to spend seven hundred bucks on a POS like those babies, but some people hate their money, I guess.

How many have taken a Machine Shop class?
32 seconds ago
How do I insert my profile photo
2 minutes ago
I’m planning on doing an Amusement Park themed layout and looking for suggestions
7 minutes ago
Buy anything cool lately?
14 minutes ago
Older MTH Railking PRR turbine (PS2) - ENGINE NOT FOUND
16 minutes ago

This is the part I don't like about repairing trains.
19 minutes ago
Railking crossing gates with sound
20 minutes ago

Expanding the O Scale Canadian Pacific 1960's diesel fleet! Custom paints.
7 hours ago
What to you guys pay for O gauge connecting pins if you buy them in a train shop?
8 hours ago
2332 GG 1 armature
8 hours ago
My 1940’s Military War Train
8 hours ago

Vignettes Along The Branch Line (1)
8 hours ago

MTH Pioneer Zephyr with Protosound Convert to TMCC?
10 hours ago

Very small layout questions
10 hours ago
Anybody do an old Ranch scene?
10 hours ago
Additional Uncatalouged MTH 60' Flat Cars with Military Loads from MTH
11 hours ago