I want to be able to cut 027, 0, Gargraves straight and flex track.

I saw some references to a Harbor Freight Chop Saw, but the recommendations were a little sketchy.  I haven't ruled it out.  It is certainly reasonably priced.  I want to be able to make a line and cut to it nice and straight (then file it).

I know that larger (2") cutoff wheels work better than smaller ones.  I have a standard grinder if there is a decent attachment that will allow me to line up the track and make the cut with it.  That would require some sort of fence I believe.

Gunner John has one of those Harbor Freight saws and depends on it.  It is as slick as chopping wood trim in a conventional wood saw.  Nice uniform parting line.

It is overkill and maybe not "perfect" for the job, but I use a Jefferson Power Hacksaw: I had the Harbor Freight chop saw and it work okay on track, had some play in it that I could not get rid of.  I tried cutting some aluminum train shelves with it and it quickly died. I also had the corded Dremel tool with the 2” cutoff wheel and that also worked.  Took two cuts per rail to allow the second cut to be accurate.  I bought the battery version (8220) with spare battery and will never go back to the corded one.

I bought the larger Dremel Ultra-Saw thinking that it would work better with track that was already laid.  It does work, cutting all three rails at once but it is heavy and hard to make a straight across cut (I don't use a guide).  I do use it once in a while, especially after I lay some flex track on a curve.  Gets the ends straight.

I decided to try another cutoff saw and bought the Toolman HD 6”, 6.5 amp Chop Saw and for just a little more than the Harbor Freight I think you are getting a much better saw.  I try to do all my track cutting with it, takes a little practice with curved track.

So, for now most of my track cutting is with the Toolman with some done with the battery Dremel.  I am sure others have their favorite saw(s).

I use a Dremel Multi-max with a metal blade. Dremel rotary with a cut-off wheel works well also.

The half round bi-metal blade makes clean cuts. Nice thing is that I can cut track in place on the layout if necc. I have the Harbor Freight and it worked well for me. It has a built-in angle adjuster so you can cut track at an angle if you need to. I found I needed to deburr the cut ends.

I use a Dremel. Then I use a one inch stationary belt sander to square off, if needed.

I used the 6" Harbor Freight chop saw with the cutoff wheel for my entire layout construction, it worked quite well.  I also use the Dremel with the 90 degree attachment and the 2" fiber cutoff wheels for working in place.

It is overkill and maybe not "perfect" for the job, but I use a Jefferson Power Hacksaw:

I used the 6" Harbor Freight chop saw with the cutoff wheel for my entire layout construction, it worked quite well.  I also use the Dremel with the 90 degree attachment and the 2" fiber cutoff wheels for working in place.

Is it a cutoff wheel that you attached or did it come with the one you use?  2"?  Larger?

I use a Dremel Multi-max with a metal blade. Dremel rotary with a cut-off wheel works well also.

The half round bi-metal blade makes clean cuts. Nice thing is that I can cut track in place on the layout if necc.

Thanks.  You line it up by eye?  I do have an old Handi Grinder and also a Vigor Flexible Shaft Machine.  But I think I will be cutting track off layout for now. 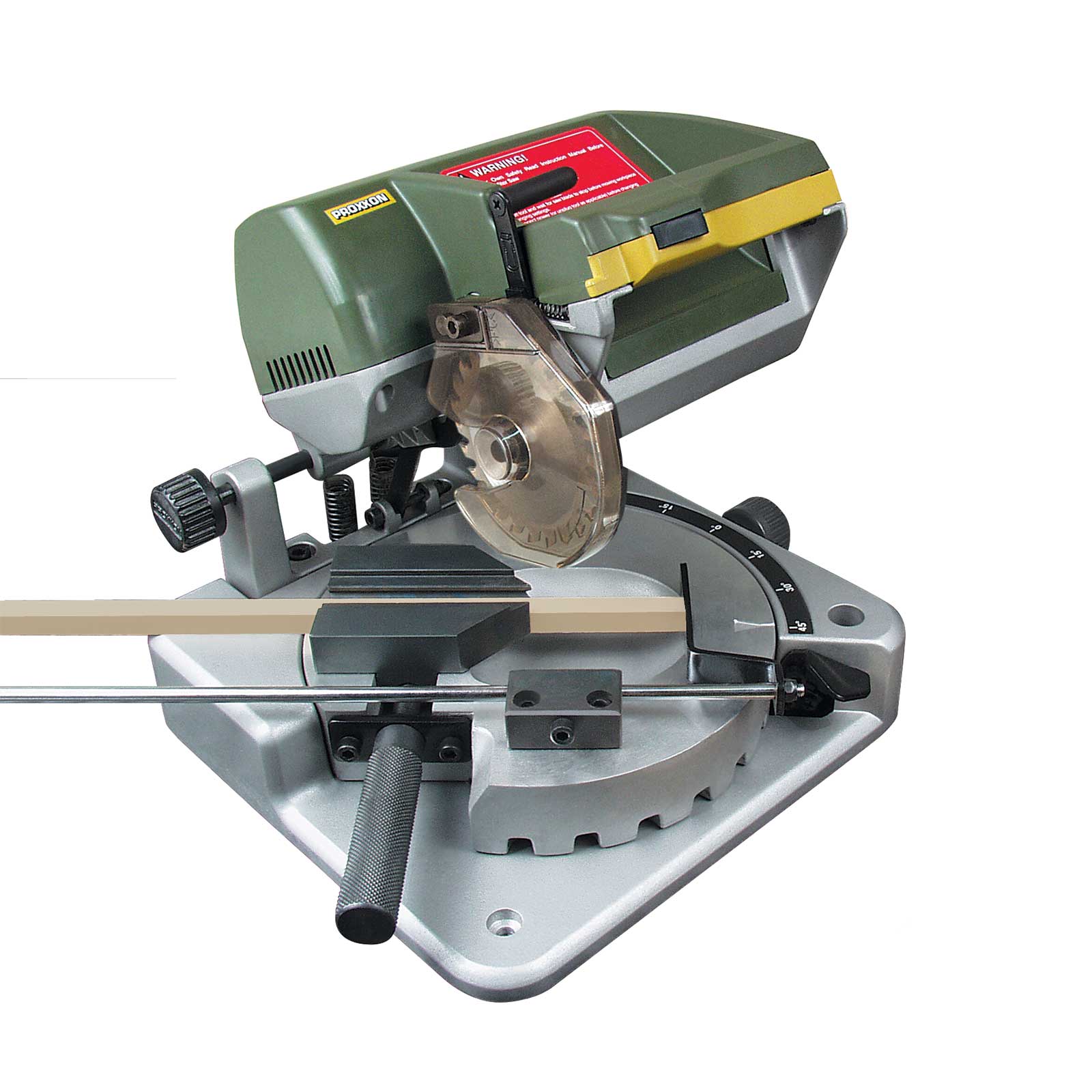 The top part of the jaws open wide enough to hold either Ross or Gargraves track.

Perfect straight down cuts on any angle.  I did need to tape up the plastic blade guard.

I use an abrasive disc, but you can get this instead: 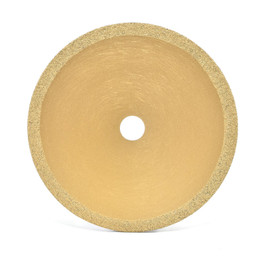 I use the Dremel Saw Max I use a Dremel. Then I use a one inch stationary belt sander to square off, if needed.

After weighing all the great suggestions I decided to get a combination stationary disc / narrow belt sander. A line, a rough cut outside the line, use the 5" disc on the above machine to sand it to the line, deburr.

Thanks for all the suggestions.

I think this is being over thunk - your handy dandy everyday dremel type tool with a cutoff disk works perfectly for me.

A bonus is that you can use it on location on your layout. I think this is being over thunk - your handy dandy everyday dremel type tool with a cutoff disk works perfectly for me.

A bonus is that you can use it on location on your layout.

I do have those tools for that option if I need it.  I can use it either on the 4 foot side or the 8 foot side.

Amen !  I have not used this trick in years though it is a big help when you need very accurate cuts.  I don't have a compound miter saw so I used my radial arm with a bit of a twist.  Take a scrap of 2x4 and run down it's length on a router table to put three grooves where you place your section of straight track rail head down into the grooves. It holds the rail rigidly in place while you push the board against the fence as the blade cuts thorugh.  It is a great aid when cutting very short pieces. You set the depth of the cut about half the depth of the 2 x 4 and make your cut somewhere in the middle of the board so both ends of the track are supported. Obviously this does not work for cutting curved track but a convenient work around is to cut four 1" long sections off the grooved 2x4 and space them along you section of track and put two of them close to each side of the saw blade. About a 1" gap is plenty wide enough not to fowl the blade. Both these techniques work well with conventional sectional track and flex track such as Gargraves but are not really needed with track that has a molded on roadbed such as Fastrack.  Even if you don't have a Miter saw or a radial arm and use a hacksaw  you can make a track cutting miter box from a few scraps of wood that hold everything in place.          j

This is a great idea, with one caveat... be sure that the area is clear of sawdust before cutting, so that a spark doesn't cause a fire.

Thanks.  You line it up by eye?  I do have an old Handi Grinder and also a Vigor Flexible Shaft Machine.  But I think I will be cutting track off layout for now.

I use a straight edge to mark the rails and cut free hand. I clamp the track with a couple small blocks of wood to reduce the movement.

I use a bench grinder to true the ends of track, usually cut with a hacksaw, 32 tooth per inch works bests.

I have used a Sawzall.  You can find reverse cut blades. Most reciprocating saw blades cut on the pull/in-stroke, there are blades that cut on the out-stroke.

That machine I ordered will be useful to me because I have a portable belt sander and two portable disc sanders, but anytime I needed a stationary version of those I had to lay the portable tools on their sides and then stack a couple of pieces of scrap wood to serve as a table.  Pretty awkward even when clamped.

@Craftech I believe you will take care of any three track slicing that you will ever need with any tool you have selected.

my Dremel rotary hand tool was so versatile and simple to use during my construction of my layout 5 years ago.  I liked the variable speed.   All I needed in addition to the Dremel and grinding disk was two good electrical cords for each side of the table, a straight metal file to file off each of the three metal tracks.

Most important extra I needed to use though is the eye protection.

each an every person on this Forum must use eye protection when grinding any metal whatsoever.  It’s a must.

Bought this on sale for $30 at Harbor Freight, hard to argue with the price.  It came with a fiber cut-off wheel, and I'm still using that, though I bought a couple of spares.  I just didn't count on the one in it lasting so long.

This worked great for cutting the track. Maybe just to put a cap on this subject, the disadvantage to using a power tool with a smaller cut-off wheel than the width of all three rails (like the Dremel) is that it only cuts one, maybe two rails at a time and you have to cut the other rail(s) in a separate cut. Thus, the straightness of your cut across all three rails is dependent on how good your eye is or your hand is at insuring all three cuts line up.

In addition, because of the way the tool is designed, as you cut into the rail, it is impossible to keep the edge of the cut-off wheel perpendicular to the rail and it angles away from the cut (unless you use a special adapter).

Conversely, the advantage to using a tool like the Harbor Freight one is that the blade is wide enough to cut across all the rails at the same time to keep the cut perfectly straight across all three rails and the cut will always be perpendicular to the rails.

Abandoned in NJ
28 minutes ago

What do you think is the next great feature in O scale?
44 minutes ago