I'm posting this here b/c I suspect this train is 2 rail scale. But it may be outside 3 rail scale. Don't know.

Please excuse the photo quality, shooting through a glass showcase is seldom very good. I found this in a museum in Tamaqua Pa yesterday. Unfortunately, there was no explaination card with it and no one to ask.

Any idea who manufactured it and when? Is it 2 rail or 3? Anything esle you can tell us about it? Hard to tell from those images. Outside 3rd rail had "whiskers" that stuck out and contacted the outside 3rd rail. Don't see any of those. Need to look underneath for three rail rollers or lack thereof!

A final thought: If it was made solely for display, it might not be powered at all!

The castings look sort of crude.   My first gues was going to be a CLW set of locos.   Those go way back.   However after looking at the photos, I don't think so.   CLW never had a PA that looked like that nose.   Actually the CLW PA did not have a very accurate nose.

I would suspect it wasn't made in 1963.  The detail and accuracy even back then was much better then what the model is.

I would suspect it's a home made model by someone familiar with the casting process.

Is this the Tamaqua Historical Society Museum ?  Why not send them an email and ask ??

It "looks" larger than 0 scale/gauge to me but admittedly that is hard to judge with little reference.

Steinzeit, Yes it is the THS museum. Thanks for the suggestion, I've sent them an email. Let's see what their response is. I'll keep this thread updated.

Looks like an often typical museum display that someone donated, the museum didn't want to say "no" and no one really knows much about. Displayed in a casual way, no explanation, unable to see the entire set, too low to get a good look or appreciation of it or the other rail cars in the same display case. All-in-all, a poor situation. Too bad someone at the museum hasn't taken to time to do it justice.

The roof lines, nose and windshields are not anywhere near accurate for an Alco.  They should be flat, and straight across the horizontal plane.  It almost has a British look to it. If it appears to be bigger than 1/48, could it be 17/64ths or even bigger?  What are the freight cars lurking in the background?

That nose and window profile look awfully like a British Rail Class 37 diesel. 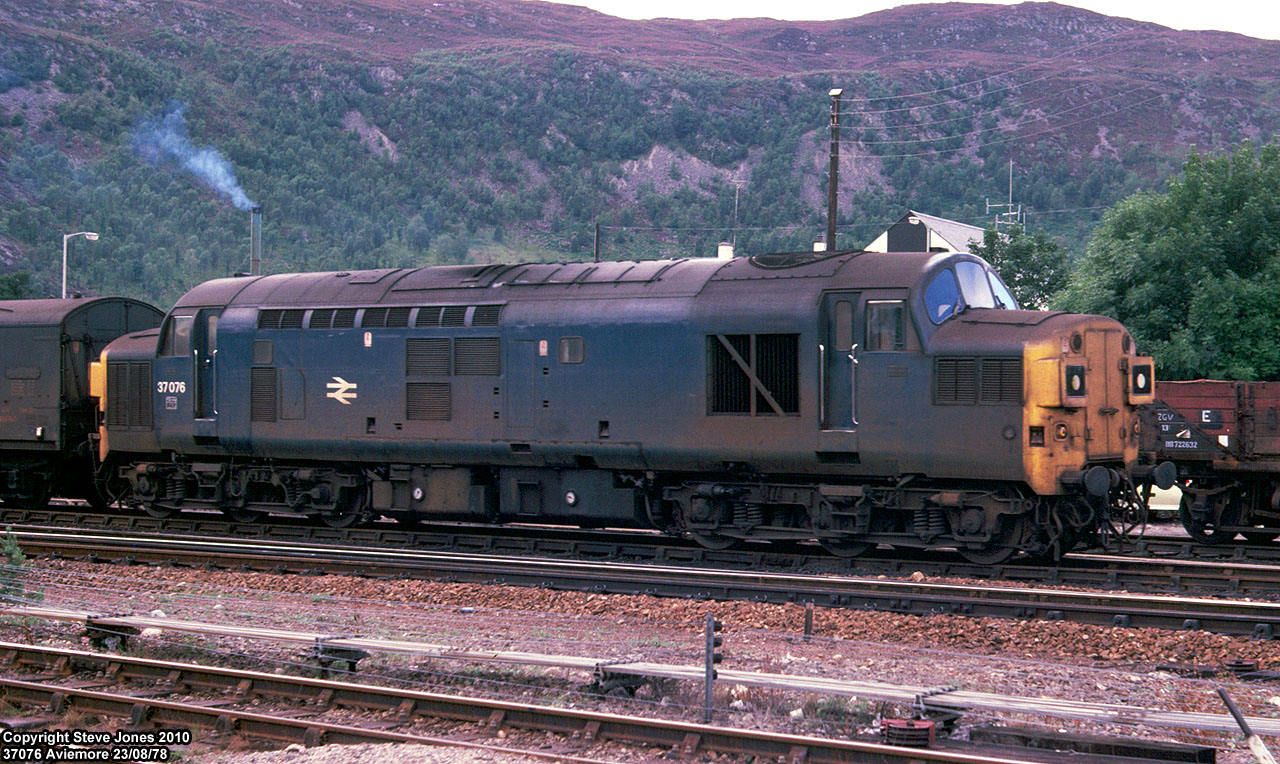 That nose and window profile look awfully like a British Rail Class 37 diesel.

I see your point but I really don’t think that’s a model of a British prototype; the road number enclosure and horns don’t look anything like what British Rail had.  It seems to be a streamliner diesel of some kind - maybe Australian? Anyway it looks custom built what with the metal bodies and what looks like gold trim on the cars. I’ll wait to learn what the museum says!

Actually, that Australian type looks pretty close for the nose. The number board style does not match.

I really hope the museum responds.  I can't imagine what it is.  Seems like a lot of work to hand make something, that isn't very accurate.  As far as I know no PA's never had fluted side cladding, particularly UP.  If I am wrong on this someone please correct me.  I am always trying to learn more about the Transitional Era.

I really am thinking that someone at GM would have had a fit, if PA's were ever used to pull the "train of tomorrow after UP obtained it.  Although is there is a picture of Cladded PA's pulling it I would love to see it!

The farther back you go into model train and O scale history, the more crude the models are.    the information was not as available in many cases, and "good enough" was a lower standard because you had to scratch build nearly everything or work from crude kits.

The costs of "nice" O scale stuff prior to WWII was pretty high.   the average guy could not afford much.   The built up scale craft and even the scale lionel hudson were for the more well-heeled enthusiast.

So many people made do with what they could build with what materials they had or could get cheap.    Many of the kits even still had sand castings for most body parts.    And a lot of guys would build there own from scratch and might take years to do it.

Getting a loop of track down, and a loco and a few cars built was a big project.

So while this is very crude by the standards of even the 50s and 60s brass, it probably was a serious project for the builder maybe in 1935 or somesuch.

I just spotted that in the next to last photo, it appears to show a B unit that is lettered “Union Pacific” and is numbered “500” which you can see if you click on that picture to see it enlarged: This doesn’t look exactly like any UP engine I know of, but the maker was obviously trying to model something - maybe this was a concept train that was never built for service? While I’ll defer to others who think that the build quality of the set isn’t good, I AM NOT SO SURE ABOUT THAT. Someone went to a lot of trouble to put on all that gold fluting and add ventilation screens and roof details.

A little research shows that the UP 500 series locomotives were designated F9s and had a variety of car bodies. This doesn’t look similar but maybe it’s a lead. Anyway, this model definitely belongs in a museum!

If anyone would know, it would be Carey Williams....

Does anyone think that they are Baldwin or Erie but locomotives?

I know Fairbanks-Morse built a set of streamline cab units that looked somewhat similar to the models.......? They look factory built rather than home made. The whole complete train looks pretty nice.

Does anyone think that they are Baldwin or Erie but locomotives?

No way. But maybe this:

With those huge porthole windows (and their location), I'm gonna guess this is a free-lance model, done by a real craftsman who was working from either memory or poor photos...

It would be nice to know the story behind them.     As is, they are not as effective an exhibit in my opinion.

If we were able to see the trucks, they would possibly divulge the secret of this engine's origin.

Update: I've heard indirectly from the THS. As usual, the responses to questions like this beg more questions. I've ask for more info, but this is what I have so far.

The passenger set and the steam lead freight set behind it are one-offs. They were created by the same man. He was a retired Mining engineer for the LC&N Co. (Lehigh Coal and Navigation), and simply loved trains. Both the freight and passenger sets were totally scratch built in the 1930s through 1950s.

What the exact gauge is and whether or not any of these are powered are questions yet to be answered by the THS. I'd love to be able to go back and actually handle them (with appropriate precautions) or get  someone there to do so. The fluting has me puzzled, as it does have a golden hue to it. But I seriously doubt actual gold was used. I'm hoping if he went to this much trouble to create all this, that there was trackage involved. Don't know if the museum has any of that or not.

Thanks for the update, which is certainly intriguing. I would have said that the diesel passenger set and the freight cars that are visible in the photos must be later than the museum’s date range, but if not that just makes it more interesting.

I was thinking that the fluting might be anodized aluminum rather than anything else but who knows?

Fluting could be corrugated brass sheet.  That was a popular material at that time, for soldered together kits.  It was sometimes plated to make it look like steel metal industrial buildings such as in Suydam Kits.

A little whimsy……..
30 minutes ago
u/Property404 on Reddit has developed a way to control Lionchief engines using Python
31 minutes ago

IN MEMORIAM - EDDIE MURPHY a.k.a. EDDIE-NIAGARA
2 hours ago
Tail End Tuesday
6 hours ago

Let's talk brass train cars!
7 hours ago
buying used switches
7 hours ago
Buy anything cool lately?
7 hours ago
(SOLVED) The Home link stopped working, at least for me.
8 hours ago

Looking for Weaver Models painter
9 hours ago
DCS and conventional
9 hours ago
Building a layout in a basement with rain leaks?
9 hours ago

HO Building as background flat
9 hours ago
Garden railroad ballast ?
9 hours ago
Lionel 785 added to the fleet
10 hours ago