Video starts with a passing freight train. One of the tankers appears to be in a bit of distress (it has been highlighted in the video)

An entire wreck train is dispatched, and apparently all that was done was to assemble some blocking under the errant truck and pull it back onto the railheads with another diesel. Unfortunately there may be a bit of additional info in the subtitles, but Google can't translate those (not that it does a particularly good job with Russian anyway). The comments, on the other hand reveal plenty of accusations of featherbedding

We do get a good look at a Russian "big hook" though...

(I ran across the above while reading a thread on 4chan's transportation board, in a thread dedicated to a Q&A session about Russian railroads. I'd asked about why so many of their freight railcars were so uniformly short, and the answer was 22-ton axle load limit--which explained why the only longer tankers in the train had eight axles.)

As for the Russian video.. No   shortage of man power

. It must have been stationed  close by . Although a crew might be able to re-rail the car around a yard with a supply of blocks it would be difficult to do  out on the road, best left to the experts. Besides the re-railers that hang on the engine  are really heavy. It takes two   crew members to handle them.

Now days a road repair truck  (car dept) handle this type of thing if thy can drive to it.

I'm not sure the big hook would have  worked  out underneath the over head wires?

Thanks for posting.  Very interesting.

It looked like a PennDOT worksite.  3 guys working and 30 standing around drinking coffee and "supervising".

50 employees and a couple of dogs shouting instructions from the sidelines!  Possibly the snappiest looking wreck train I have ever seen + an extremely heavy duty crane, mounted on eight wheel  trucks!

Noted no graffiti on the freight cars - Russia must have a special gulag for taggers! Judging from the concrete ties, heavy rail, neatly ballasted right of way, modern condition of their roller-bearing rolling stock, Russians have a high regard for their railroad.  Impressive.

Did you catch the neat 4 truck tank car in the video? Good thing that one didn't derail or they would have needed the whole Russian army. We must keep everyone employed, Comrade!

I checked the page with Google and hit the 'translate' button. As always there's something lost, but there are some pretty witty Russians posting about the same thing; like "Why are there 100,500 people of which 10 people work?", and a few other ......ahem.....spicier comments.

Must have been a slow day on the railroad.

Noted no graffiti on the freight cars - Russia must have a special gulag for taggers! Judging from the concrete ties, heavy rail, neatly ballasted right of way, modern condition of their roller-bearing rolling stock, Russians have a high regard for their railroad.  Impressive.

Mark, they don't get much, if any on the freight cars.

However, they do suffer extensive graffiti on passenger equipment. Especially on their version of the Metro, that run in tunnels.  There are gangs who hide out at night waiting for the opportunity to attack a train.

Here's but one example I found: Why the 22 ton axle load?  Light rail, weak bridges..or  ?  Amazing how much information did not formerly come out of Russia...the model car sites in 1/43rd are saturated with models of cars we never heard of, leaving me thinking there were few or none for citizens.  This rerailing does seem to set a new standard for featherbedding that would make U.S. railroad management cringe.

Thanks, David. .   Think they need a Metro Train tagger gulag!  Maybe we could send our taggers there, too!

This looks like a heavy travelled main line.... Double track and electrified... Having a derailed car sitting on the main ties up one of the main  tracks.(maybe both if the car is just clear of the other track.   Not good for business.... Yes I know it's possible to re-rail a car with blocks,  re-railers  hydraulic jacks whatever  but you have to get them   to the site first . You can't always drive to the location., also needed is  a engine to move the car over the re-railers.  so that means getting rid of parts of the train, Why? hanging on to 40 or cars trying to make a gentle move is not that easy.  If the car is loaded it also  makes it a little more difficult.   It seems the big hook was handy so they brought it out only to unload the blocks of wood etc....Yep a little over the top,but hey it's their railroad. Makes me wonder what could have been inside that car, especially since the Russian Army was walking around as well. My Russian is pretty rusty, so I couldn't get enough from the written portions of the video to get any further info.

Maybe the cargo was the reason it took so long to get it back on the rails?

That's not unusual in other countries. The railways are built to lighter standards than mainline USA, often with a higher proportion of passenger traffic rather than heavy freight. The Australian standard gauge national network is rated for similar axle loadings (that does not include their isolated heavy-haul iron ore railroads).

Strange thing about the Russian & railroads in other ex-Soviet Union “Commonwealth of Independent States” countries is that while their axle load might be less than those in North America, their loading gauge is wider than the AAR – Plate F, used here in the US.

CIS countries also use the Russian Broad Gauge (5’) as opposed to the Standard track gauge (4’8.5”).

These are just my opinion, 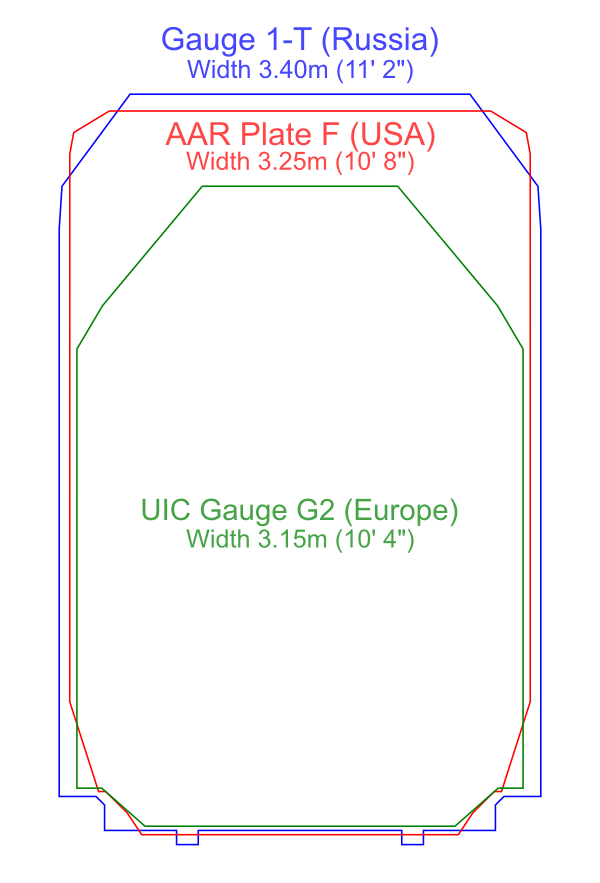 Did you catch the neat 4 truck tank car in the video? Good thing that one didn't derail or they would have needed the whole Russian army.

That was funny! LOL

It is a Putin job

He must like the railroads over there, the work train was spotless.

Translations of Russian commentary after the video may provide some further enlightenment:

the movement of trains in the Rostov region of the North-Caucasian railway.

04.20.2015 at 16:05 on the stretch Kiziterinka - Aleksandrovka Rostov region of the North-Caucasian railway occurred gathering empty tank of a freight train.

In place of the Rostov-on-Don and Bataysk sent 2 recovery train.

April 20, 2015 at 19:10 (MSK) opened to traffic on the second way Kiziterinka - Aleksandrovka Rostov region of the North-Caucasian railway. Thus, the movement on the stretch fully restored.

No injuries, no environmental threat. Dimension neighboring path has not been broken. Movement of trains on the stretch was not interrupted.

Roman Mihalich 10 months ago
Just out of curiosity: I felt Locos gang, but rather what symptoms carriage descent in the composition (not ??? traction, etc.), as part of the zdorovuschy ... In our region 17 years passed-laden part of one wagon gone - only noticed the gathering at the station-braked.
Reply •
Maxim Pryakhin
Maxim Pryahin5 months ago
Nuuu author of the most interesting climbing that ??? By the number of people I assumed that the "Chinese" way - ie, the crowd rose and set but then I realized that neee - according to an old Russian method - 2nd 20 face work)))
Reply • 25 View all 6 replies
Vasilii V
Vasilii V2 months ago
+ Maxim Pryakhin Well two degrees is usually said that the first attempt did not guess the profession

Or are you of the rare gogorty expand your profile?

Read more
Reply • 1
Sergey
Sergey Sergeevich1 month ago
+ Vasilii V It has two entities, and to write, and so ignorant without the mat.

Thyme 10 months ago
A principal and not as a trolley on rails put?
Reply • 37 View all 3 replies
Sa59vely
Sa59vely10 months ago
+ Tcyme at 10:03 you can see how drives CHME3, it's just pulls a cart on rails descended on the "frogs", which can be seen in 6:33 and beyond.
It's amazing that with such speed descent consequences are minimal - only one truck.
Reply • 3
Sarge Serge
Sarge Serzh5 months ago
+ LIB1995 someone prevented the shooting?
Reply •
Roman S.
Roman S.10 months ago
Igor fellow, installation and photography itself is made in the 5+ plus rare shot

Artyom kugel 10 months ago
+ LIB 1995 And when the car derailed not you afraid that you come home very late, or stay the night at the crash site. Well, if you probably would find anywhere to sleep.
Reply •
Artyom kugel
Artyom kugel10 months ago
+ LIB1995 Igor you in 2012 filmed another proishevstvie is disrupted when a train brake valve. You done a lot of shooting. I thank you for your work about the shooting schedule. I'm also a fan of the railway. You came at the right time in the right place. But it was a coincidence.
Reply • 6
androngorshkov
androngorshkov2 weeks ago
Video Title: "the car to go and reconstruction work." here I have not seen the car descent, no restoration work !!
Reply • 3
Vasya Pupkin
Bob Pupkin2 months ago
first I wanted to ask - what is gone? and at 13.40, and looked through all the issues have disappeared .... inner track - it's just PVCs PPC ... accordion
Reply • 1
Steam Lok
Steam Lok10 months ago
So many people because of one of the car .. It is necessary to reduce the staff of the different parasites!
Reply • 9
Gans Gruber
Gans Gruber2 months ago
+ Steam Lok workaholic Conventional cut regularly, and the states of sucking prostitutes in the offices increases.
Reply • 2
Steam Lok
Steam Lok2 months ago
+ Gans Gruber Well, this "holy" ...

How do you change the light on these bridges? They are missing the flashing device.
38 minutes ago
Western Roads Wednesday
2 hours ago

#97 Coal Elevator Activation using ASC2, is it possible?
7 hours ago

Have you moded your AeroTrain?
7 hours ago
Buy/Make Anything Cool Lately (Tinplate Version)
7 hours ago

Got my Sunset F3 units
7 hours ago
Could Someone Edit and Create a Custom MTH Sound File for Me?
7 hours ago
Problem with Menards building
8 hours ago
MTH Realtrax Switch Issues
8 hours ago
My Last Atlas O Container Car set.
8 hours ago

Did MTH not make many of the Premier Phase V Genesis locos?
11 hours ago

IR or Optical Sensors
12 hours ago
All Topics