I am moving cross country soon and will attempt to take my layout with me.  It is complete except for scenery.  The benchwork is all screws and bolts and will disassemble easily.  The track is not ballasted so can be tagged and boxed.  But, what about the wiring?  Nothing is soldered; all connections are to terminal blocks, so all wires can be disconnected and saved (theoretically.)   For those of you who have gone through this process, is it worthwhile to try to save the wiring?  I spent a lot of time underneath the layout, and would like to preserve all that work, if feasible.  If I do, are here any suggestions as to how to categorize and package it so that I can make sense of it at the new location?  I have made wiring diagrams, but that's just a pretty picture.

I would think the only way to really preserve all the work you did would be to leave the wiring attached to the structure as much as possible (obviously will need to have cuts though if it's multiple boards, which it sounds like it probably is. Unless by bench work you just meant legs under a single 4x8 sheet, then it would be easy to just leave all the wiring where it is).

Next best thing would be to take very good notes as to where everything is attached and then disconnect, and tag each wire in some way.  You will be running all the wires again(re-doing that part of the work), but at least they will all still be the right lengths if you properly identify everything.

If you have the layout in a computer program like RRTrack or SCARM, a good organizational aide would be to print some copies of the track plan and then mark it up with notes as to where everything connects.

Hope this helped, even if not a solid single answer, might give you some things to think about that will help you be successful.

If you truly want to salvage the wiring, you will need to label every terminal block and every wire connected to those terminal blocks. After you label everything, take a lot of photos of each block, with the labels visible. Then you can start disconnecting everything.

This is possible to do, but the key to making it work is organization.

I face the same issue with my L-shaped layout. The wiring is color coded and was installed to various terminal blocks according to the voltages. Helpful, but not a "gold standard."

My layout has five separate platforms, and each one rests on sawhorses by the force of gravity. The wiring is held in place with cable ties, so the wiring grid is relatively neat.  But if a home relocation was imminent, I'd re-do the wiring from scratch and do a much neater job.

*  applied a wire number to each wire (both ends) for identification or trouble-shooting. With numbered wires, I could have created a WIRE LOG for reference.

*  installed terminal strips at each side of the seam between the platforms, with numbers for ID; then create short "jumpers" for connections. When the time comes for disassembly, the jumper wires could be disconnected at the terminal strips, then re-installed when re-assembled according to the numbers. A time-consuming procedure upfront (when one is usually eager to get trains running ASAP), but VERY helpful when the layout must be taken down, transported, and set up again.

Perhaps this confession is out of bounds, but at age 80 I'm not likely to ever relocate from this house. After my passing and boarding the Celestial Express for a one-way trip, the layout will go to the following owner of the house. My widow won't want it, so she'll let the new owner deal with it.

Thanks for your replies.  The bus wires span several "sections" of the layout, so I can't leave them in place.  Labeling the terminals is a good idea, and I guess I have a lot of tagging of individual wires to do.  As you point out, Dave, if I can salvage the wiring, I will have everything just the right length upon reinstallation, thus saving time and money.  Thanks again, everyone.

Unless the terminal strips near seams is of use in other wiring, plugs would be a better option for bridging sections imo.

That's another possibility too, cut the wires and add plugs right now.

HD/ Lowes/ Menards sell these wire number tags. Get a couple of them. Decide on how you want to identify each system (power, switches, lighting, etc), A-1, B-1, etc, and mark and document each section where you want to cut. Adding terminal strips as you take it apart will make re-assembly much easier.

Good luck with the move and re-build. 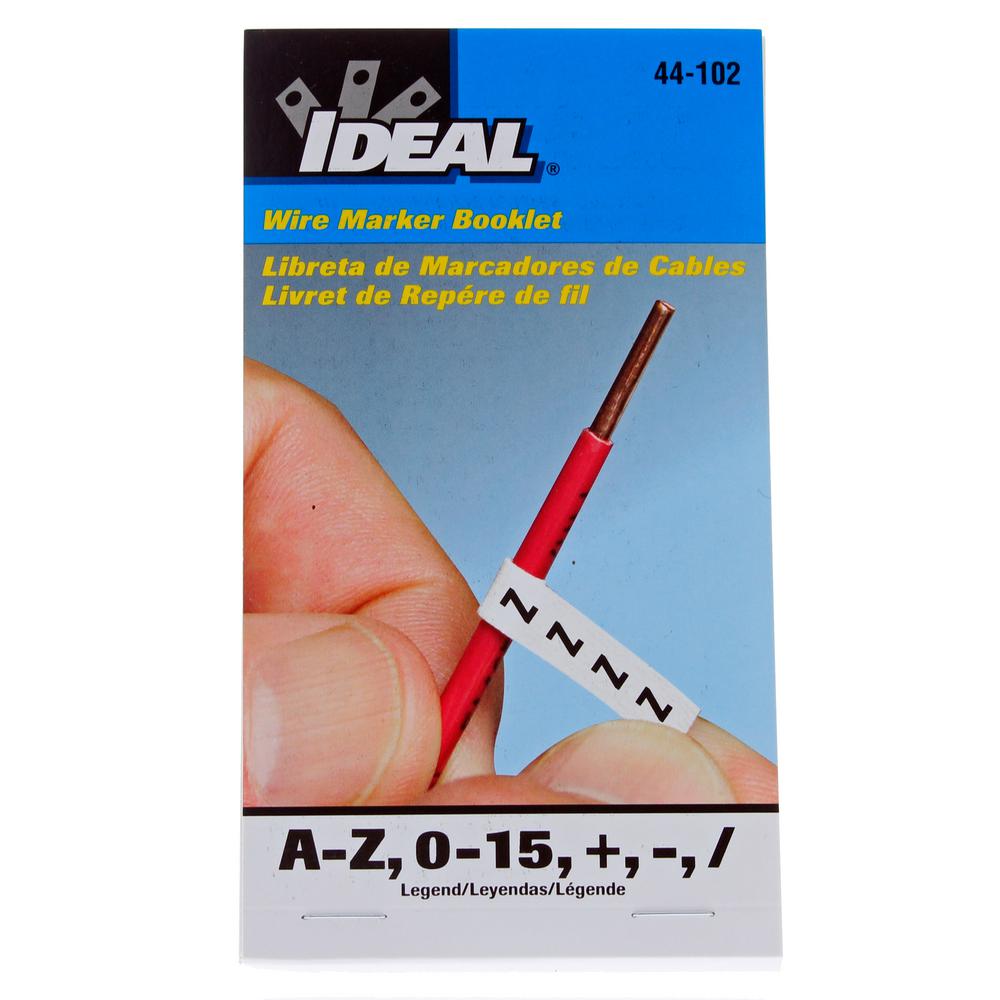 Labeling is a good idea, a diagram is important as well. I would also take photos from the underside that shows the wire locations as well.

If you plan on installing the layout EXACTLY as you have it now, then you should not have any issues. But often, we learn from previous layout design, that we want to change this or that.

I've saved wires from previous layouts, but only use a small percentage of the wire. It was more of a hassle for me to locate the correct size and length to reuse it. And I wanted to improve the way that I installed the new system.

I built my layout in sections.  4 x 4 ish sizes.  I have not done this on all sections but I have on some.  At the break points I have the black terminal blocks one on each side of the break point, then a jumper.    For other sections I used the layout wood as the terminal block, I cut the wire, screwed each end to the board and ran a jumper across the break point.   Since they line up across from each other there is no real need to label the wires, and they are secure to the board.

The modular clubs move their layouts all the time and the electrical connections are a critical component of the inter-connection standards.   Color coding and reliable connectors are key to building module wiring harnesses but the harnesses are a PITA to build.  My holiday show layouts have a lot of switch and accessory connections (outside the standard harness) and I find color coded wires and terminal blocks to be the fastest way to reconnect everything 11 months later.

I would break the wiring at each layout section (a module) and connect the wires to a terminal block at edge of the section.  Label the block.  When you reassemble, jumper the adjacent terminal blocks together.

There is a very good chance that when I retire, I will move to another house.  And I want to take what I'm building now with me. With over 20 years with the Lehigh Valley Hi-Railers modular group,  I took some design ideas from them when I decided to build this layout . The layout is designed to come apart and be removed in easily managed sections. I pre-wired the sections for the main busses as I built and installed them. Wiring from the top down is much easier than from the bottom up! I put terminal blocks at each interface, and followed  a standard location and color scheme for each section. Bridging the gaps with jumpers was very easy. The picture below is a straight section and a corner.

I do have 3 sections that are designed to come apart that did not have this structure, as they were part of the old layout. So I added terminal blocks to them prior to disassembly. Pain in the tush, but worth it, as they are now reinstalled and operational. The wiring is not as neatly done as one the new sections, but it works and was easy to reconnect. The green stripes on the frame are registration marks, as these sections can only be put together one way. This helps make that happen. The reasons I suggest something like a 12 pin molex are low cost and speed.

If terminal strips for fast seperation were the "best"; you'd see it in other portable design but you don't; you see plugs. (lighting, stage, coin op cabnets, pinball and video game sections... all use fast assembly techniques and plugs between sections on equipment that seperate )  (I am thinking of one exception .... a pita it had so many terminal blocks, no plugs.)

Lehighlines top sections could have used the cheaper plugs to a big advantage for sure; the lower portion however has some extra wires on those terminals that would warrant keeping them. The plug set addition between terminal blocks still saves time though.

Adriatic, your points are well taken. And if I planned to be moving many times, I most certainly would have used quality plugs for quicker assembly and disassembly. Molex connectors are fine for lights and accessories, but for track power and digital signals, I much prefer Anderson Power Poles over Molex. They seem to be easier to connect and the signal strength is better. Your mileage may vary. Plus you can buy them rated for 10amps and configure them to your particular needs. AFAIK, the original heavy duty Molex connectors we used have been out of production for some time and are scarce as hens teeth.But I digress, as I’m not planning on multiple moves and time is not of the essence.

+1 on Anderson Power Poles.  You can get a variety of housing colors to color-code the connections.  Powerwerx is my goto source as they typically have most of everything in stock.

AN OGR FORUM CHARTER SPONSOR
Garrett's 2021 Christmas train layout
6 minutes ago
Any Train Stores That You Miss?
11 minutes ago

a picture a day....
54 minutes ago
Is there a way to adjust sound level on early LionChief Locomotives?
1 hour ago

The Lionel 2021 PAs are Here!
2 hours ago
PLA Specific Glue
2 hours ago

What is your picture for best detailed/favorite paint scheme piece of rolling stock from Lionel?
3 hours ago

Sad News For S Scale
5 hours ago
My idea for track bumpers - UPDATED: now slightly more prototypical - and they work very well for me
5 hours ago