I have been mulling over whether to send 30 Euros to an online resource for mainly European and French trains ?

Just wondering if anyone has actually contributed to this library or has full access to it ?

It seems rather a large database of catalogues etc and could be worth a try ?

You can get (lifetime) free access to this database by contributing scans of a catalogue, which I did years ago (of course a catalogue Joël, the owner of the site wants and needs). So instead of spending 30 euro you could try that route. I think it is a very good resource and use it frequently.

I saw that but as I only really have a few old hornby catalogues I would be guessing he has them already darn it ... Hmm I wonder if I could hunt up some on Aussie trains he might like them ? Then again its really hard to get your hands on a physical copy of them as well

I think the resource could well be worth a 30 euro spend , but I have this horrible fear it could disappear in a year or two and bye bye access lol ( I am aware its been up for the last 8 years or so

I value your opinion highly Fred and your words put me more at ease ...

The website of my friend Joël is a great database for original catalogs and docs. As Fred tells you it may also be free access... I have contributed to it with all the scans of my catalogs, some are not common at all...

What you can do is register all the pages on your computer and you have a permanent access.

You may also subscribe to the french forum of the CFE ( Cercle Ferroviphile Europeen ) it is free but in french only... there is a lot of nice pictures and you will meet Fred and me there, even if i do prefer the OGR one which is the best for me.

Thank you Daniel I will most certainly check it out , perhaps my 3rd form French lessons from far too many years ago will finally come in handy LOL!

As I said for Fred above , I also thank you for your kindness and knowledge you spread so freely here , you and many others here have really educated me about the hobby which I was very late to find ...

It is very appreciated

Oh and Tuco the parrot agrees , as she was yelling at me while perched on my shoulder typing to you ! 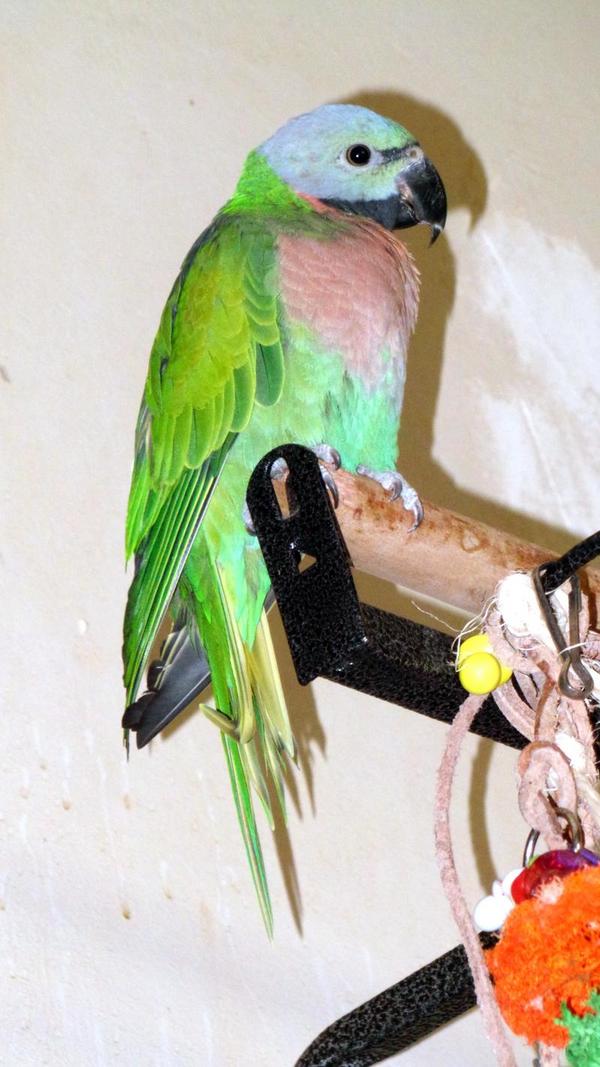 NICE bird! Is she very chatty?

Art ... she is! LOL Possibly 100 times a day I am reassured she "is a good Giiiiiirlll"

This is in between bouts of " Hey Tuco! " which is her general "Look at me!" cry or if I leave the room where I must yell it back to let her know where in the house I am

She will also ask me if I am too quiet , like when working on the computer .. "Wat u doen? " until I tell her

and she delights in yelling " Oh Ohh! TuuuuCo! " when having fun playing with her toys

I think anyone who doubts how sentient a companion bird is , obviously hasnt lived with one , They communicate clearly in OUR language to the best of their ability , something we cant do ? They also have a very good sense of context which throws out the argument that it is just mimicry ...

She has two favourite toys that hang in the door of her cage , which is always open if I am home and just shut up for sleep time so she feels safe , Moustache Parrots , which is what she is , are a naturally nervy bird compared to some other parrots , ....but getting back to her toys lol .. She has a couple of bells tied on a leather rope , and a plastic ball with holes in it on the same type of rope ... both she identifies by name and if you ask her to grab the ball she does muttering " gotta balll gotta balll" , or in the case of the bells its " Get the bell on !!!"  she never confuses the two ... never!

She will ask for playthings , "wanna stick" is her asking politely for a tongue depressor , which I buy in boxes of 1,000 cos she can shred one into fibres in about 2 minutes if she is trying

"Toast ?"  If I am eating some and havent offered her a crust lol..

but perhaps the very cutest is we both say "Ni Nigh" to each other after I turn off the light for her bedtime ...This is a complex ritual lol , but basicaly involves her getting stroppy if I stay up to late at which point she may occasionally ask " light off?" So I will then change out the paper on the floor of her cage and remove any veggies she has not eaten ... usually to several cries in her own tounge and the occasional" what you doin' " and  PAYYYYPERRR !!!"

Then I take her water out for changing , and she settles into her night perch while I tell her I am going for a shower

.. then on return I slip in the fresh water bowl and fake turning the lights off ... at which point she objects and MUST come out for a final cuddle and kiss on my finger , after which she is fine to go back inside and settle down for the night .. lights go off with me announcing " light off One.. Two .. Three! " then I lean into her cage and say " Ni Nigh" which she repeats and then hunkers in for the night lol ...

She is only just 2 years old , and I raised her from 4 weeks from her parents ...so she has lots of learning to do

She has a slight immune problem , which is why she has the curly tail feathers and she was very late to flight being over a year before she could , we have a terrible disease here endemic in native parrots PBFD , which is a viral disease that only affects young birds and is usually fatal in nestlings , Tuco seemed to only have a very slight case of it and because of her diet and vigour seems to be fighting it off and thriving

If my memory serves me, you can view a few Louis Roussy catalogs in the sample area of that site.

Here are a few places where I've had success:

atelier-bruno-moret.blog4ever.com   - several JEP catalogs & a few others - plus great tools & modeling info with lots of photos - all in French

dermodellbahnblog.de   - most Marklin catalogs from 30's to 50's

conradantiquario.de  - A few catalogs from many makers

I will surely check those out , thank you !

She is my best Mate

rowdy , messy , a little noisy at times, Stubborn and sometimes cranky... but infinitely loved , and when you love a bird you love all the faults that come with them

For German trains there's a 1950 Liebmann catalog at ddr-spielzeugmuseum-aschersleben.de.  It can be hard to see; click on the small images you can see the model numbers and read the text.

train35.fr has a few catalogs from the 50's, including a 1959 JEP catalog that I think is not on any of these other sites. 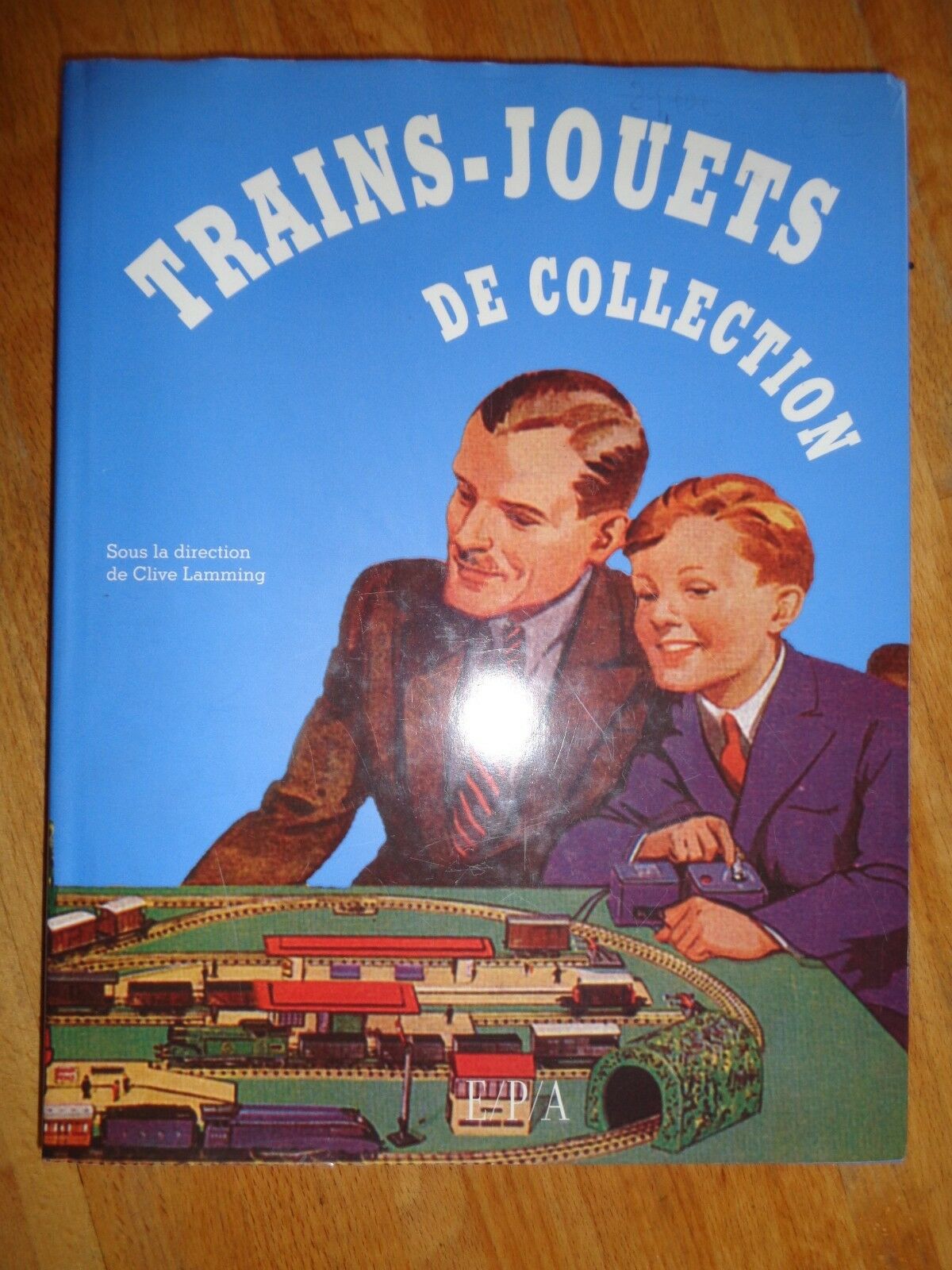 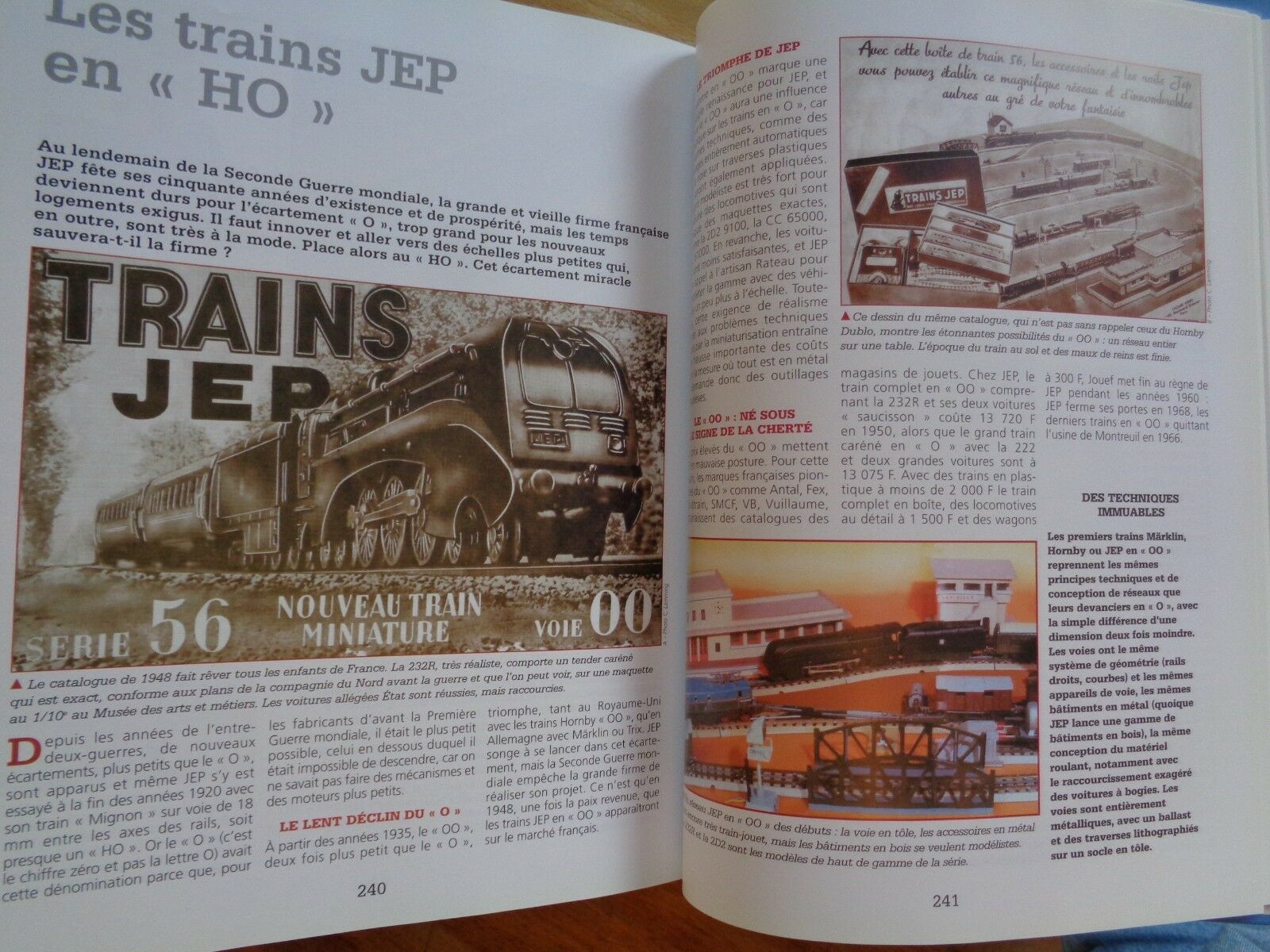 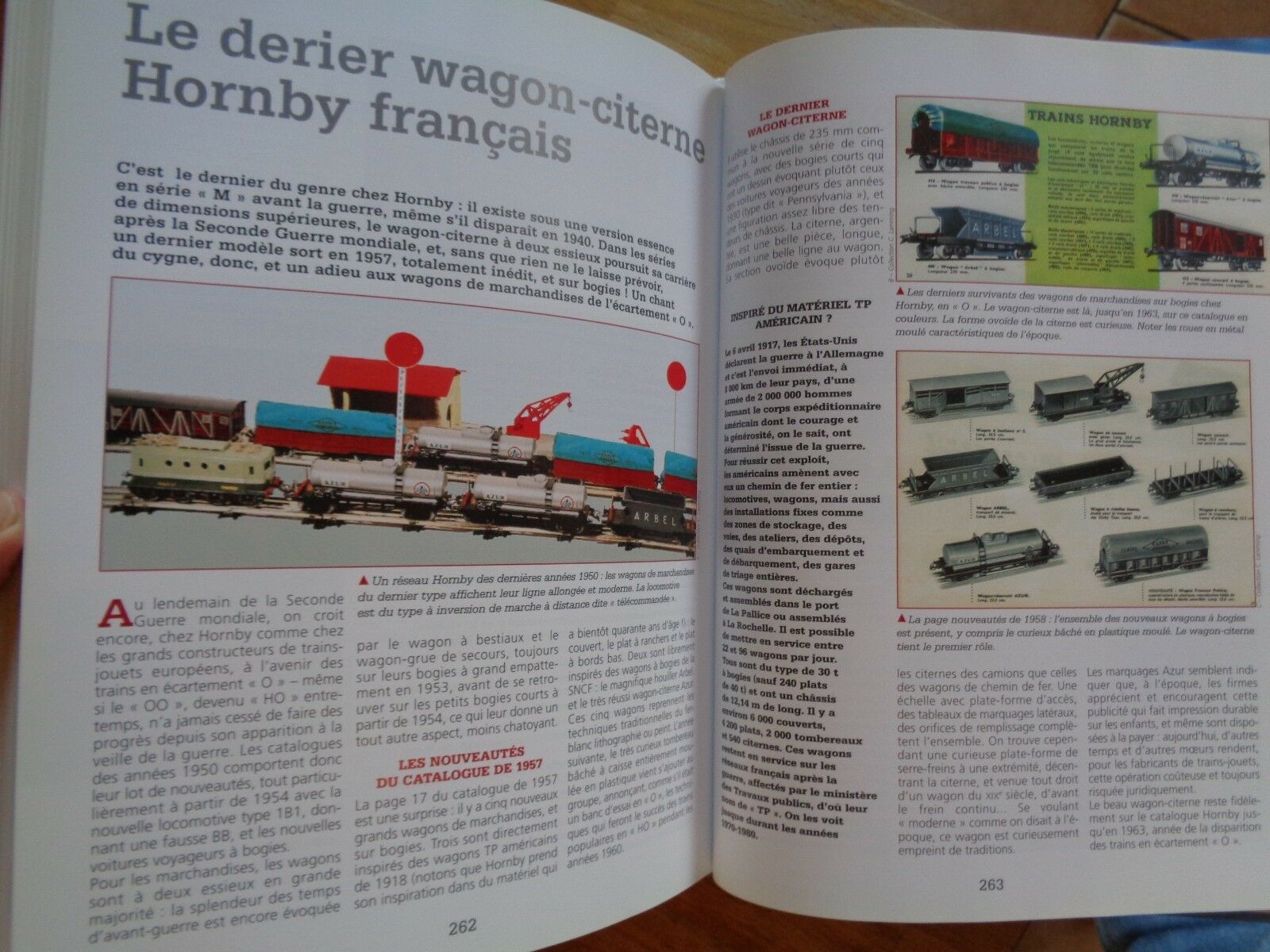 From a French ebay seller who does rather cheap postage !

If nothing else it should exercise my rudimentary French

If nothing else it should exercise my rudimentary French

It is one of the books I bought and read and never looked at again.

No no, money spent on "books about trains" is always good. Only spending on trains (or a beer once in a while) is better.

Its one of the classics , but it often only talks about the more common examples from manufacturers , but I agree its a great one stop shop for a lot of information

Plus it also assumes you KNOW who made what , which is often the reason why I am researching say German trains after the war when 80% of them were prevented from marketing actual brands in the wake of the war ...

I could not agree more ! ... in fact I just bought a Johann Hoefler tin set which I will reveal in the Friday pics thread lol .. not O, but hey its clockwork and tin

Do your upper and lower levels connect?
10 minutes ago

Different transformers on separate tracks, all running conventional and DCS via Double Pole - Double Through switch.
45 minutes ago
Lionel PW Questions...
47 minutes ago

overheating solenoid
3 hours ago
a picture a day....
3 hours ago
MTH Engine Gear Ratios
4 hours ago

Mccoy
4 hours ago
TIU power for conventional (variable) locos
4 hours ago
Has anyone installed TMCC in a Red Caboose GP9?
4 hours ago

How many have taken a Machine Shop class?
5 hours ago
making a transducer louder
5 hours ago
The Scent Of Ozone...
6 hours ago