The table layout allows for 60" width.  O54/O45 worked a double loop.  Each faint black line mark is 12".   A small bedroom and closet bottom of picture. Camera walk-around.  Click on the underlined phrase.  There has been two additions.  One was a turntable.  The second was a remote section coal tipple, accessed with an Atlas double track Pratt truss bridge.

one 072 oval and the rest is 036.
For research purposes An 036 visionline steamer would be cool and I assume it would be a hot seller given it could run on almost every layout.

I use both 072 and 096 from Menards.  The trains look really good on the extra wide radius curves.  Track is made really well although I did add more ties to the 096 stuff.

The 072 worked out well and the gradual look of curves was appealing.

I still managed to make 2 mistakes that did not reveal themselves until many years later:

1) As I had a 2 track mainline, some curves were too close together

2) some scenery was too close to the curves.

These things did not emerge until I bought a Lionel   B&O 2-8-8-4.   The engine ran extremely well on the track but there were a half dozen or more issues due to points 1) and 2).  I eventually sold it.    In 1990 when I built the layout I could not envision owning such an engine.  Way too much overhang in front!

I'm not sure why people make such a big deal about overhang with articulated locomotives.  It happens in the prototype too! 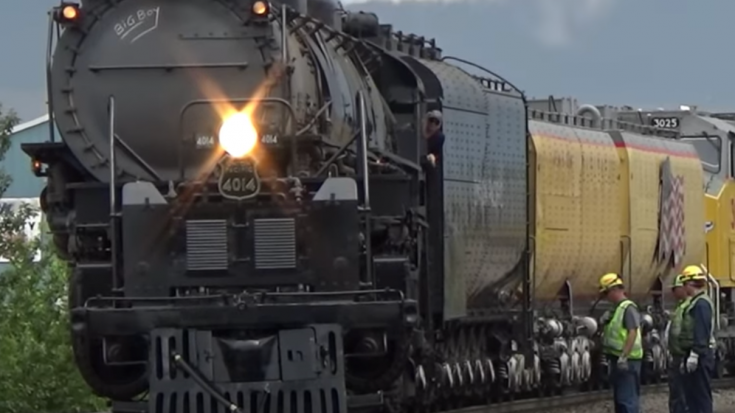 The largest diameter on my floor layout is 0-81. The majority is O72.

The 81 is not really 81" center rail  to center rail, and the O72 isn't either. Found this out by things 'just not working' using an AutoCad knockoff to design the layout, and things just not coming up right. At some point I made a ring of both, measured center to center, then another 90°, then used the average for my drawings. I had to adjust the ring several times to get it as close to a circle as I could with the tape measure. Tubular track is just, will, yeah, close enough.

Further to Michael T's post, tinplate track sizes differ from one manufacturer to the next.

For those using O27 height wider radius track, even small differences can have one scratching their head when things just don't seem to line up. So you don't go nuts:

When using O54's, please note that the K-line version is 1/4 inch longer than Lionel's.

I'm not sure why people make such a big deal about overhang with articulated locomotives.  It happens in the prototype too!

I sure hope so, otherwise they made a huge financial mistake going to all the trouble to make them articulated in the first place!

Plus, I am 18, so my layout is still not really a professional layout. But honestly, I don't really see the point of getting anything that needs really big curves other than the Big Boy, the smaller versions usually look just fine.

This is only on one corner though. Most are O54.

Remember in toy trains track 027 for instance is the diameter of a circle measured at the outside of the ties, not at the center rail as engineering drawings for circles always are.

As much as I love the look of a larger engine running on a big curve , it just takes up too much room. I understand engines require a min curve and thanks ok  but SIZE MATTERS . I am happy for the guys and gals that can support 060 and larger. Almost all of what I have down is 048 and that covers a vast majority of my stuff.

A vision line engine that could be used on 036 would be wildly popular in my opinion.
That’s my two cents worth

I like making up trains and enjoy watching them going around ! After some loops,

the trains stop at the depot and the engines go off to be serviced, the train is broken down and a new one is

made up to return to Chicago.

This would probably be boring to some operators. There are three small industries for freight service and a ice platform where refrigerated  cars are serviced to go with the passenger trains. O-42 on my home layout. I run my larger engines and cars on our club layout that has O-72 and wider.

You would be really surprised how good passenger cars look O-54 curve.

I kinda think thats why the shorter cars are hard to find. The early mth cars are really durable and good for what you are looking for.

O112 on visible outer main, O104 on visible inner main, eased down to down to O80/72 at apexes of U-loop underpasses that are not visible.

Due to space limitations, O31 on the outer loop; O27 on the inner loop.  I run postwar locos with short cars.

I think we have been here before:

I have been watching this thread to see if I had any folks who do what I do and John, you are the first. Your solution is just like mine.  See below.  Now I don't feel so lonely... Glad to "meet you"

Outside loop is O42 in O27 profile

Hi Don McErlean, Yes, you are not alone!  I’m perfectly content with my 3’ X 9’ layout.   When finished, I’ll be able to run three trains on three independent loops (one elevated). I’m currently building a mountain on the left side of the bench work. I’m learning as I’m going and having a blast. Maybe it’s our common work history.  I spent 45+ years as an Engineer in the Aerospace and Defense industry including many years supporting NASA programs.

CA John  HEY its great to meet you and to know there is another "small radius" engineer out there in "train land"!   Its possible we might even have bumped into each other some time as the industry is not as big as some think.  I worked for Air Force Systems Command, Naval Air Systems Command, NASA (HQ) and L-3 over my career primarily in propulsion, structures, mechanical design, certification, safety and airworthiness.

I like the idea of an elevated line...I thought of that but thought it would be too heavy looking.  When you get a chance maybe post some pictures.  I thought perhaps an On3 line using modified HO street cars and HO track as sort of an interurban might work.  Like all layouts mine is not finished...

Abandoned in NJ
41 minutes ago

What do you think is the next great feature in O scale?
57 minutes ago

Favorite Modern feature on locomotives
5 hours ago
Union rail road
6 hours ago
New book "21 Great Track Plans for Compact Layouts by Ken Hoganson" - are all the layouts shown for both Atlas and Fastrack?
6 hours ago

lift up bridge
11 hours ago