So, I was doing a bit of digging out of boredom, and have discovered a rather interesting fact. In the 50's and 60's, There was actually O gauge set produced in the soviet union, described as having a diesel-type locomotive, two freight cars, two passenger cars, 3 street lamps, 3 signals, 3 operating accessories, and various other things used to operate the set, such as transformer and track. The first locomotives in the 50's, labeled "Stalin-era", had Stalin's initials engraved on the sides of the engine, while later engines did not, and were labeled "Khrushchev-era" locomotives. They were produced for 19 years, production ending in 1969. They were made in a variety of colors, and there are rumors going around the current Russian government considers them "National Treasures", and will forcefully apprehend anyone trying to take them out of the country! I know of at least one set here in america, and am going to see if I can negotiate a deal to get my hands on it. (Imagine owning a national treasure!) Here is a photo I have found online of the set, an artists illustration 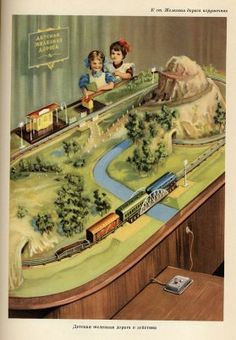 Interesting seeing girls in the picture, model trains were normally considered a boy's toy.
If memory serves me correctly, there was also a model train made in the soviet union in the 20's or 30's, though I don't have the energy to search for it for a second time.

You can certainly find them over here--they come up on eB@/ at times, and they aren't all that pricey.  I don't think the current iteration of the KGB will come to your house and kill you for having one

They ARE set up for European electrical standards.

They are pretty neat sets.  CTT did at least one article on them; I don't know if OGR has or not.

Women largely ran the Soviet RRs during WWII; I know of at least one that became a Hero of the Soviet Union for her work, and they made a docudrama about her, sort of like Audie Murphy's To Hell and Back.

There is a page on the TCA western website http://www.tcawestern.org/moskobel.htm on the Soviet O Gauge Trains.

Dave's Trains also has several pages on them. He has a for sale page. However, nothing is currently available, but he lists the sale prices on items, so one can find some target sale prices.

When I was in Leningrad in the 80s on business, I actually saw some in a department store there, but it never dawned upon me to purchase them. I ended up buying a TT-Gauge Soviet Railcar.

Subsequently I purchased a Ukrainian HO gondola and an HO Ukrainian passenger car.

You can certainly find them over here--they come up on eB@/ at times, and they aren't all that pricey.  I don't think the current iteration of the KGB will come to your house and kill you for having one

Well, that's relieving (But a little disapointing. Wheres the fun in not being a fugitive for owning a model train?)

I know of one in a museum a few hours from where I live. The engine isn't a big part of the collection, I don't think. From what I've seen it just runs laps on the museum layout. I could negotiate a deal, and maybe trade out a few modern trains for it. It would go to completing my collection of getting o gauge from as many countries as possible.

It's an interesting set.  All of the track, straight, curved, switches, and bridge have little metal tabs with numbers riveted to them.  The numbers correspond to the numbers assigned to the track in the diagram that came with the set.  The street lamps have a very different glass globe which provides a great visual impression when you turn them on and turn off all of the lights in the room.

As you will see when you check the websites mentioned above there were "early" and "late" versions of the signals and the bridge as well as the locomotive casting and color. Two plastic trucks with good details on the beds,  from a seller in Russia. Lots of detail on the truck beds.  John in Lansing, ILL

they even made a copy of the Lionel Gateman. 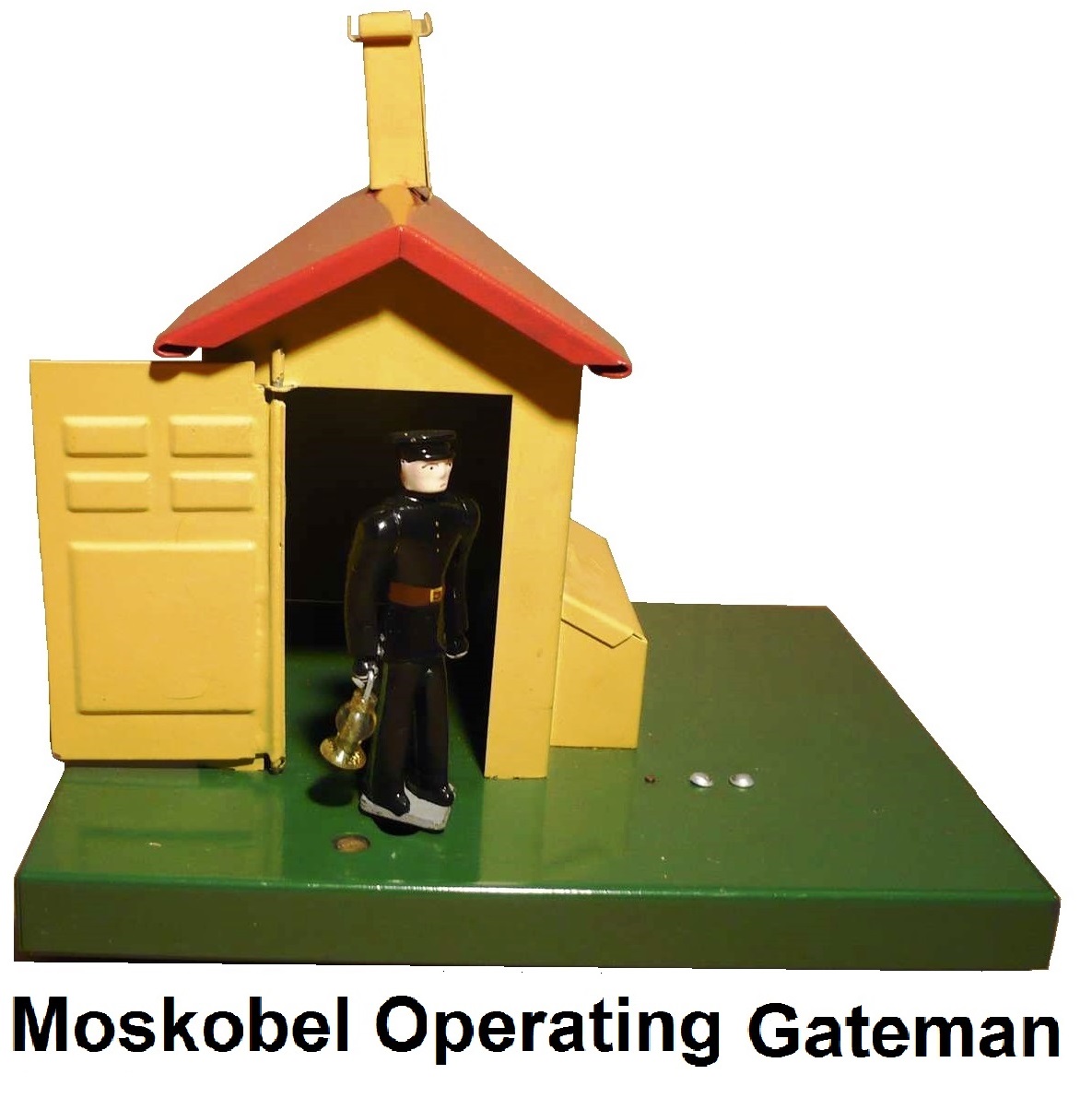 What is also interesting is the sheet metal thickness - it's almost twice the thickness of its Lionel counterpart.  You can't see it from this camera angle but the colored plastic in the hole in the base is green in the above example whereas it looks to be yellow in Dave's picture which means the color of the light coming from the base would match the color of the lantern it was illuminating.

I had a set once including the wood crate.

One of our Midwest Division members has (at least I think) a complete set of the Russian trains that were  made available. Very interesting and makes you realize that we are probably more alike then we are different.

This is just a portion of the trains he brought to show the members. Everything on the table was made in Russia. One of our club members had a small collection of the Russian "O" gauge stuff.

I enjoy seeing O gauge and others  sold  her from other countries-excluding China One thing I liked about the TCA shows.

There was an article about these Russian trains in an old issue of OGR or maybe it was CTT.  The set-up and operation was quite interesting.  Somewhat different from our system.  I'll have to find the article.

I know a guy that grew up just outside of Moscow. He was in the army, on leave in Afghanistan when the wall fell in Germany and took the opportunity to defect, jumping countries till he finally made it here, and eventually bringing most of the family over too.  It's a much different culture in many ways. Too many to go into, but his "quick" description is it was the Wild West with cars vs horses.  Police, just another gang that robs you. The best place for money was buried.

He never saw one O train, or even knew a single person who got one. Asking kinda upset him and his story went quickly from his excellent English into Russian. Nothing upsets him. He said he couldn't find himself one, let alone me one, and gave me these from his wallet before again slipping into Russian. I'm pretty sure he carried them ever since he defected.

Someone did a decent post on these sets within the last 6-7 months if you search. Here is the one I used to have running on the shop layout. I eventually found the flagman to complete the set.

IN SOVIET RUSSIA,  TRAINS RUN YOU!!!

(sorry, SOMEBODY hadda say it.)

Hello all ...here is a link to a former posting about the Moskobel trains ...

Picked up this floor toy based on the Kharkiv children's train a few months back. More of OO or S-gauge in size. I imagine many Soviet bloc manufacturers and East German trains were available in Russia during the Khrushchev era. Igra, TPK, Zeuke, Minor, Chemoplast. They also reproduced quite a few tin western toys in their own litho. and their version of the Biller 095 dockyard crane. Don't know who made this one. I enjoy seeing O gauge and others  sold  her from other countries-excluding China One thing I liked about the TCA shows.

Agreed! I love collecting trains from other countries/multiple manufacturers. They all had their own unique styles and charm, yet they still retained their original toy-like charm. They also reflect the trains that ran in their country at the time, which just adds to the uniqueness.

IN SOVIET RUSSIA,  TRAINS RUN YOU!!!

(sorry, SOMEBODY hadda say it.)

Couple of pictures of my set

I own a set; it is currently on loan to the Virginia Museum of Transportation. It's in one of the second floor display cases.

Funny story, in 2016, I was looking for really decent prices on 1:43 die cast cars for my layout.  I purchased a bunch from Russia.  They arrived after 30 days, and are all very nicely detailed.  To my surprise, on the bottom, all are stamped' made in China'....  Evan the Russians are manufacturing in China'...  I guess, that's the reason they were half price of the equivalent USA models.... When I ordered them, I thought it would be cool to have die cast cars that were actually made in Russia'...

Can someone post a picture of the electric motor setup from one ?

Can someone post a picture of the electric motor setup from one ?

If you follow Carry's link there is a photo of the motor out of the shell. I assume the cylinders are the weights, but they kinda remind me of very eary early electric motor fields Ive seen too.

I'd like to see one further broke down if it's out there. Solder connections are rusting!
3 minutes ago

I'm thinking of dabbling in 2 rail...
5 minutes ago
Photo Chain Game
6 minutes ago

Can You Tell?
17 minutes ago

Who Done It?
52 minutes ago

Getting Lionel Warranty to Respond?
2 hours ago
Jaye and Jaye Train Store in Cleveland
2 hours ago

Anyone have the new Williams 70 ton switcher yet?
3 hours ago

May She RIP, 3985
3 hours ago
Will painting an overhead ground plane wire degrade its performance?
3 hours ago

Lion Chief 2.0 Sightings
3 hours ago
Lift Bridges. Anyone have something on a pulley??
4 hours ago