I'm thinking about making my own rail ties for Lionel O gauge track. Any advice on what type wood, dimension of the ties width, thickness, length, easiest way to cut then to size. Is it worth the time and work. Pictures of ties that have been done by anyone out there would be great. Or just buy them.

If you are using Lionel (or equivalent) tubular track, you can make them, or (I think) you can buy wooden, plastic, or rubber ones that mimic the steel ones. Notice that the steel ties on O27-height track, and O31-height track are different.  By creating wooden ties that mimic either of those two profiles, you can make "pretty-good" looking tracks, but they still have that toy-like appearance. That can be a good thing, if toy-like is your layout motif.  Real ties on mainlines measure 7" x 9" x 102" on 21" centers.  The wooden Lionel-ish ties that I am suggesting will not comply with those dimensions, of course.

All the other major track systems come with wood or plastic almost-scale ties.  GarGraves wooden ties look nice, but are a little over-sized. That is a function of their flexible track geometry. Any smaller, and they would probably split when being manipulated. The other sectional types have ties that are more to scale.

When I was a kid, a kindly old carpenter made me a few hundred almost scale wooden ones, which I stained black, and inserted into my Lionel O27 track system. By filling in between the steel ties, they created an illusion that they were the only ones (well, a kid's illusion). It looked pretty good to a 10-year old.

I have used these in the past.  They are sold on Amazon.  They are periodically out of stock.  They have O27 and O size.

If I were to decide to make my own wooden ties, what would be the best way to go about it? What kind of wood is best for this project? What tools? I assume I would need a small table saw. Comments anyone?

I copied this info previously from the forum for using as a general guideline.

I bought my wood at Home Depot and I believe it was 36" long. One side was flat and the other side was rounded. I painted (not stained) the strips before cutting and then painted the ends. Here's a photo of what I did. This article is pretty helpful.

thank you all for your replies.

thank you all for your replies.

I've used the rubber ties sold on Amazon (made by 3R Plastics) for many years. They're great. Looks like the black ones are out of stock but the brown are available.

Here is a write up from my layout building topic here on OGR on how I made wooden ties for 027 track 8-2020.  It gives material, size and number per track section and how I mounted them.

write up is from topic link below:

I have a 30 year old plus layout and always felt it would be a lot of effort and trouble to add ties but with lots of virus time on hand I decided to go for it.

In late July and into August 2020 I made over 600 wooden ties and added them to this 027 toy train layout.  I looked at adding two wood ties between the actual track metal ties and adding three wooden ties and chose three as being better. I chose to make the ties ½ inch wide by 2 inches long and 1/8 inch thick which is the size of the metal ties on Lionel and Marx 027 track and these unrealistic sizes and spacing fit my 027 toy train layout.  About 150 ties were made bigger, 2 1/8 inch and 5/16 inch wide to be used on the new train board. This board deck is made from noisy plywood and the ties appear larger because of pieces of truck inner tube that was used under the metal track ties to quiet things down.

I use 1/8 inch thick, one side smooth Masonite compressed wood.  It is already 1/8 inches thick and I had scrape pieces lying around, some being used peg board.  I used a band saw to cut the ties out.  I cut 1/2 inch wide strips and cut them into 2 inch long ties, 5 or 6 strips at a time, by holding then together by hand.  This way of cutting and the use of 1/8 inch thick Masonite made them EZ wooden ties.  I had to file some rough edges smooth.

One problem was the fine saw powder produced by the band saw cutting Masonite covered the whole shop.  This powder dust was much finer than typical saw dust. I did not notice the dust at first and it was too late to put a vacuum hose on under the saw table for the first 150 ties.   I then added a cut down 1 gallon milk jug and hooked up a small Red Devil vacuum to the milk hole and added shop vacuum hose between the saw table and the milk jug.  This solved the dust problem as most of the dust on a band saw is carried under the table by the blade.

I spray painted the ties with cheap Walmart black gloss paint.  I chose black because most of my track had black ties except for a couple sections of silver pr brown.  The black was too black and I spray a mist of light gray paint over the black painted ties to lighten them up.  It took me several part time days to make 600 ties.

I installed them by putting a couple of dots of Elmer’s white glue on between the tracks and thin bead of white glue on the ties.  I cut ties with a pair of diagonal pliers to make small pieces to fill in spots blocked with soldered on feed wires, etc.  That holds them in place and they can be easily removed by tapping with a screw driver and tack hammer if necessary.  I had to remove a few that I did not get lined up properly.  I would work on installing them about an hour an evening at time while watching TV news but found out I could not watch SEC replay football games made me miss  too much football!

The pictures below were taken while the tie installation was in progress and show some track before wooden ties. I like the looks of my new ties and they break up my painted light gray attempt of ballasting.  But now the 31 Marx 1590 light gray painted switches really show out.   I now call my track Semi-Super O27 Realistic Track !

Same thing I did on Warrenville Choo Choo Charlie, except I used 3/16 thick x 1/2 inch wide balsa, also cut to 2 inch lengths - about 2,900 of them. Painted brown to match the ties on "modern era" O27 height track.  If you use 3/16 thick balsa it will match the height of the O27 ties, so 99% of the time no glue is needed, held in place when you screw the tracks down. On elevated levels I attached them to the rails with a drop of hot glue.

You can also cut Balsa with a single edge razor blade = no dust.

I use kitty litter for ballast, leaving it loose, not glued down

It won't do the OP any good, but just as an aside, it's too bad Moondog Express is gone. They went out of business about 20 years ago, now. I remember buying some of their O gauge ties, which were black and made out of hard rubber. Really looked and worked great, although a bit on the pricey side. They also did a periodic publication for their products and other things. The page of one of the pubs, shown below on the left, shows an ad for their RR ties. 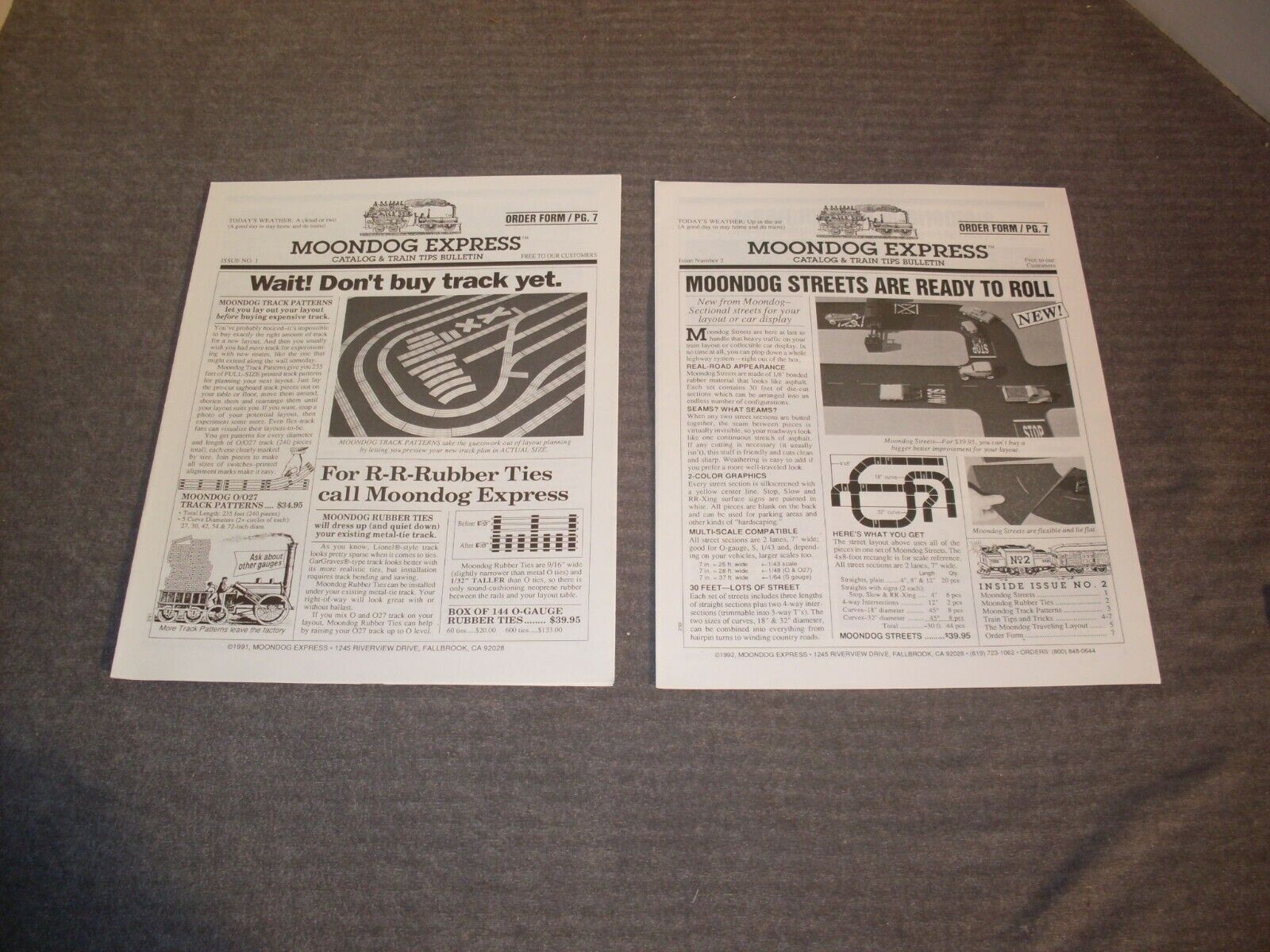 I remember Moondog.  A friend bought a bag to try them out, never bought more, they had a smell that just never dissipated. If I recall, black for O height track only, none for O27 height track

I have a few issues of the Moondog Express newsletter someplace, I never seem to toss toy train related paper Here are my O gauge tracks with my home fabricated ties made out of 1/4 x 1/4 poplar and stained with Brennan’s Ballast.

If you fasten the track to the board they will stay in place without gluing them to the bottom of the track.

Here they are on a temporary holiday layout: As mentioned by some, I also used basswood strips. 3/8" x 5/8" just fit under my tubular track. I stained the ties with acrylic wood stain, and spiked the ties to the track. Ready for patrons on the Super Chief...
50 minutes ago

Show Me Your Oil Tankers
1 hour ago

Death of Prince Phillip, Duke of Edinburgh, CP Royal Hudson and the 1939 Royal Train
1 hour ago