Just to grind my teeth, l occasionally page through the internet offerings of HO structure kits, few available in O scale.  There are a tremendous variety of WALTHERS Cornerstone kits, covering almost every industry, and while l found just one each water mill and stamp mill, and two grain elevators, there was a CM Basalt hotel kit, and enough interesting and different railroad station kits to line your tracks, platform to platform, or fill your shelves floor to ceiling.

Walthers used to make O scale kits (no where near their HO scale variety). They sold that business to Atlas O which has come out with a few but is taking its time on others. The latest is the steel water tank which Atlas O did a great job on updating.

Try www.built-ritemodels.com (Jim Dimatteo). He has a few O and a few HO. Some were designed by Frenchie Gratts. Here are some samples of the O gauge kits. 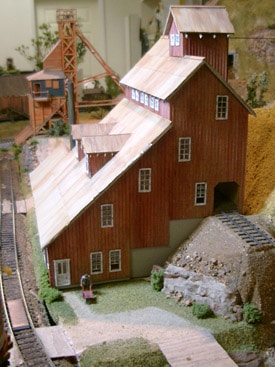 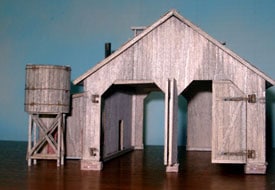 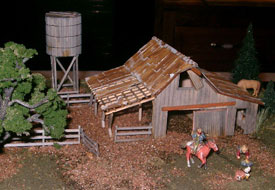 You might also want to check out BTS's offerings.  http://www.btsrr.com/

Some others to check out are:

These all offer some O Scale kits.

Another source is to attend a large O Scale meet such as the "March Meet" in the Chicago area.    There are always older kits found on some tables.

Although they aren’t kits, Crescent Locomotive Works makes some beautiful structures. And Forum Sponsor TW Trainworx makes some really nice kits. You may also want to check out Banta Modelworks.

Another terrific source is Altoona Modelworks!

All of these are good, but unfortunately, most of the really cool industrial subjects are not available. I've been forced to scratch-build things that just wouldn't show up in the commercial market. I've been complaining about it for years. If you're modeling an early 20th Century narrow gauge pike, you'll find a lot of buildings that would fit nicely.

I was asked to produce an O Scale kit of our original Union Pacific Trackside Warehouse and hesitated to do so. After about 24 hours of creating step by step directions and exploded view diagrams in AutoCad, I packaged up about 30 kits. I gave three of them away for review and constructive comment. I sold maybe a dozen of them and then sold four more at a discount off of my original asking price. I am looking at eleven of them as I write this. The balance we pulled from to do actual customer builds.

The kit has been on my website for 18 months and has been displayed at the last three York shows with absolutely no sales. In the mean time, the built up Union Pacific trackside warehouse is still our most popular model- ranging from the original 2 story version and now modified all the way up to five stories.

Granted, I have made it clear that I do not intend to produce any other kits at this time. I find the O Scale kit market one that there is virtually no potential for profit. I can build out our Union Pacific trackside warehouse almost as fast as I can put various pieces in various bags, label them, print instructions, put the contents it in a box and make it look nice. Here's the catch- I can't afford to sell the kit for less than $40.00 and the built version will not sell for more than $50.00.  I will be chatting with a hobbyist at the Amherst/Springfield show next weekend about selling him blanks of our Paterson Silk Mill. He is familiar with the materials that we use and I am confident that he will be able to use our laser cut acrylic plastic elevation pieces for his project. With that said, I will entertain conversations about out building elevations, but there will be no written instructions and the buyer should have the proper equipment and blades to cut acrylic plastic.

There is a pretty complete set of links in the scenery source list which is at the top of the scenery forum for a wide variety of structure kits and built up models.

As for choices of structures that we will develop in the future, I look for buildings that are historic in nature, have a bit of a local or regional story to tell, are architecturally interesting to model but not so complicated so as to add too much development or building time, can possibly be altered either horizontally or vertically to create lower or taller and/or longer configurations without undo redesign using AuoCAD or a table saw, and could possibly be placed on more than one region's train table.

2. Cameron Apartments was originally a five story townhouse building element that was constructed outside of Washington, DC. We have designed the core building to eight stories and have built a two stage piece at thirteen stories. It also has the flexibility for windows or no windows on the sides, your call as to whether it stands alone, or is on the right or left end of a block with a parting wall on the other side.

3. The Paterson Silk Mill project is two like-designed buildings that still stand in Paterson, NJ and have similarly designed brothers and sisters in many old industrial towns. Either a blessing or our little nightmare because of the seemingly near infinite number of configurations we can build.

4. D.F. Stauffer Building of York, PA. We have finished it without the lettering, as two buildings and configured with some of our other elevation pieces. Plus I like animal crackers. A shadowbox is owned by the family historian.

5. The Pickwick Hotel of Kansas City is now being built out with your hotel name corner sign if requested.

6. Cameron Station in Kansas City. Because it honors the originator of rail commerce in Kansas City, was designed at five stories, was built at ten stories and looks really good as a seven story custom order.

7. And now the Winchester Park Building in Springfield because it is (was) a classic looking late 1800's building, is the building where the game of baseball was invented, and was later built out by the YMCA to run the entire block with like-designed sections of the original three section design. Plus we could make it taller if asked.

8. Last is the new Paterson Mill- Art Factory building. It is just plain big and was in my camera since my first day of buildings-to-model hunting in Paterson. The S Scale version could easily be used to force perspective on an O Scale layout. Plus it is home to a great repurposing project and the owner provided historical documentation drawings so that we could develop the model accurately.

There are lots of others that I have in mind. What building would you like to see?

I haven’t bought any of Doug’s kits, not for a lack of trying but because my layout is virtually finished with structures. So, at this point I’d have to replace sections on which I’ve spent a lot of time and money. But they look terrific, give you tons of options and I would think could enhance almost any modeler’s layout with a further dose of realism. So the options are certainly there.

If I were still building, I’d also look at Barmillsmodels.com. Lots of o scale choices, terrific instructions and a finished result that approaches craftsman quality. Art Fahie, owner, is one of the nicest and best supporters in the business. I’ve built many of his kits and they are some of the stars on my layout.

Steam About Ten Years Ago
11 minutes ago

Current experience updating TIU and remote software: much less hard than years ago
31 minutes ago

Traction Tires and Clean Track
32 minutes ago
What is missing?
34 minutes ago

Feasible? Convert SW-1500 Diesel from DCS with PS-2 to Lionel TMCC?
2 hours ago

End of the line for Philadelphia’s PCCs?
2 hours ago

Weaver U25B (circa 1998) QSI sound system problem
2 hours ago
Please post pictures of your Lionel LEHIGH HUDSON RIVER C420
2 hours ago
Train shelving - is this a good idea?
3 hours ago